“I was shocked on seeing the front page of Kashmir Times (News Paper) which reported news ‘End of an Era’ about the Ved Bhasin,” Geelani said.

“He was a fearless, bold, realistic and an independent journalist and a liberal politician,” Geelani said. “My relation with Ved Bhasin dates back to the Mujahid Manzil when he used to come to Late Moulana Masoodi Sahab and I used to listen their conversations like a student.”

Geelani said, “despite being of the same age which I came to know today, I always treated Ved Bhasin as my big brother. On 29 September 2015 I also completed 86 years of my age.” “Ved Sahab was affectionate, kind and friendly with me and like Om Prakash Saraf and Kuldeep Nair, I was having very close and family relations with him.” 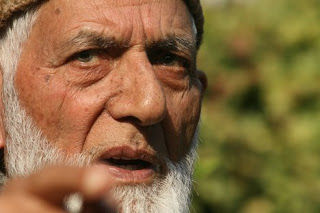 Geelani, who got emotional, said, “I can’t forget the kindness of Ved Bhasin when in 2002 Ifthikhar Geelani (son-in-law of Syed Ali Geelani) was arrested and detained in Tihar jail for 7 months just being my son-in-law. The love, affection and kindness he showed with my daughter and my grand-children at that time, is the best model of human brotherhood”. “Whenever I visited Jammu, I used to meet him there.”

Iftikar Geelani was Delhi bureau chief of Kashmir Times in 2002.

“Ved Bhasin was a legendary journalist and a great politician. He was liberal, independent and realistic person in both the departments. He was an extreme critic of communalism and communal hatred and he used to write and openly speak against that for which he has to face the wrath of the communal forces. The communal elements in Jammu attacked him and his office many times for openly speaking against them but he was bold and fearless person,” Geelani said. “He was a great advocator of human values and human brotherhood.

Commenting over Ved Bhasin’s Kashmir views, Geelani said, “Ved Bhasin was having a realistic approach towards the Kashmir issue. Whenever he was asked about it especially by the BBC, he used to say that the wishes and aspirations of the people should be listened and respected and the decision of the people should be considered supreme. He used to boldly and fearlessly condemn in strong words the atrocities and cruelties and the gagging of peaceful voices of the people of Kashmir.”

“I remember his favour to me that my Book ‘Maqtal say Wapsi’ which I wrote in Ranchi Jail was released under his chair in 2003. On the occasion, I remember the remarks of Marhoom Ved Bhasin that he said ‘it is not usually seen that a person who has hold on speeches can also have the same authority in writing but I have seen three persons of such quality in Jammu & Kashmir who are Marhoom Moulana Masoodi, Marhoom Shameem Ahmad Shameem and Syed Ali Geelani”.

“His death is a personal loss to me; I again and again remember his kindness, love affection and respect towards me. I feel that the death of Ved Bhasin has created wide space in the entire Jammu & Kashmir which is very difficult to fill,” he said.

Geelani further added, “the state government has made the Jammu division a foreign territory for me and from 2007 we are not being allowed to visit the region. After hearing the death news of Ved Bhasin, I would have immediately travelled to Jammu but the continuous house detention is not allowing me to express my sympathy and love to his and my two daughters Dr Anju Bhasin, Anuradha Bhasin Jamwal and his son-in-law Prabodh Jamwal. With moist eyes, I equally share the grief and sorrow of the family of Ved Bhasin.”