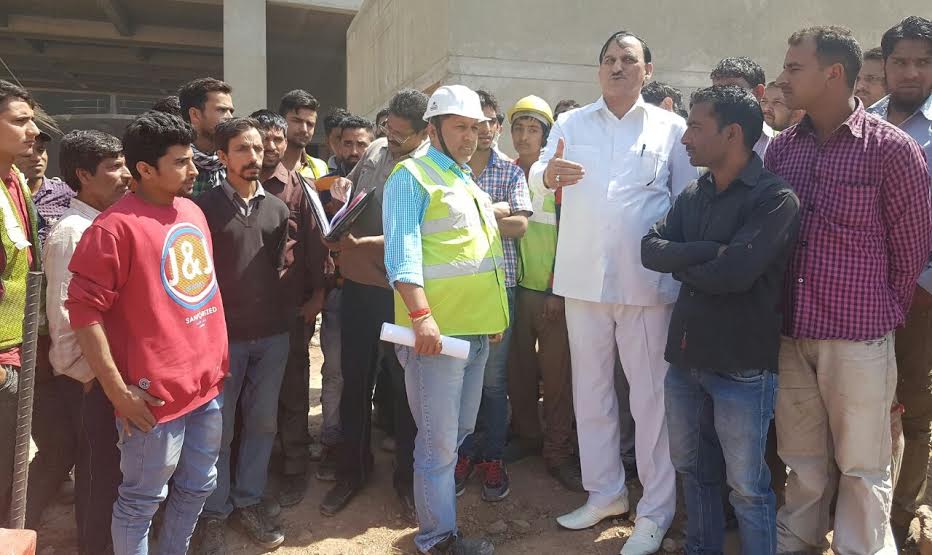 Up in arms against alleged non-adherence of Labour laws and less wages, labourers and workers of different construction companies, engaged for construction of Chenani-Nashri tunnel, held a token protest on Wednesday, lawmaker Saroori said this evening.

State Vice-President of Congress (INC) and MLA Inderwal, Ghulam Mohammad Saroori today met with angry workers of Chenani-Nashri tunnel who held a massive protest demonstration against Government inaction and indifference towards their genuine and legitimate demands.

“The protesting workers apprised Saroori of their pending demands which include implementation of labour laws & Minimum Wages Act, non-payment of the salaries, wages in lieu of overtime, safeguard equipment, engagement of local labourers, termination of outsider labourers, non-adherence of labour laws by the companies, grant of casual, earned and medical leave,” a statement issued by Saroori said.

Addressing workers, Ghulam Mohammad Saroori said the basic right to protest in favour of demands is being crushed whenever people demonstrate.

“The workers are denied basic statuary facilities and are also being subjected to unlawful victimization in terms of basic rights whenever they protest through a strong contractor management-administration-police nexus,” he said.

Saroori lamented that the workers at Chenani-Nashir tunnel are not being paid even minimum wages, not covered under social benefits like Employees Provident Fund Act, not being paid their allowances for overtime and there is no sufficient safety mechanism available to them.

He asked Deputy Commissioner Udhampur, Labour Commissioner and officials of Construction Company to address the genuine demands of workers working in the said project at an earliest.

He also assured the workers that if the DC Udhampur and other officials didn’t take any step in addressing these issues before the start of upcoming Assembly session. “Congress party will raise these issues on the floor of the Assembly so that your (Labourer) demands would be addressed on priority.”

Saroori also inspected the construction work of the tunnel at Chenani. He was accompanied by officials of Nashri Tunnel. The 9 kilometers, 2-lane main tunnel is in completion stage to link Chenani with Nashri in Ramban area to slash 31 kilometers of the journey making the travel smooth and comfortable by reducing the journey by 2 hours.

He said many government ration depots have turned defunct as there was shortage of ration. “Not only atta and rice but sugar has also not been provided to the consumers. If CAPD department fails to provide adequate ration to the general public within a week time, strong demonstration will be held in all the areas of the district hence consequences will be bad,” he said.

Later at Thathri Dak Bungalow, Saroori met with various deputations hailing from sub-division Thathri where the people apprised the MLA Inderwal about various problems being faced by them.

He stressed upon the officers to work hard for providing services to the people at their door step. SDM Thathri Abdul Qayoom Mir, Tehsildar Phagsoo Rajesh Kumar, NT Thathri Mohd Iqbal, officials from PHE Mohd Aslam, from Education Mir Ali, local Congress leaders and others were present on the occasion.