A Kashmiri garment trader’s shop was forcibly shut down in Mussoorie on Wednesday after an alleged post praising the Pakistan Army was found on his Facebook page, The Indian Express reported on Thursday.

As per the report Manzoor Ahmad, 59, from Humhama in Kashmir’s Budgam district, is among the five oldest trader families in Mussoorie. His shop has been selling garments since 1971. 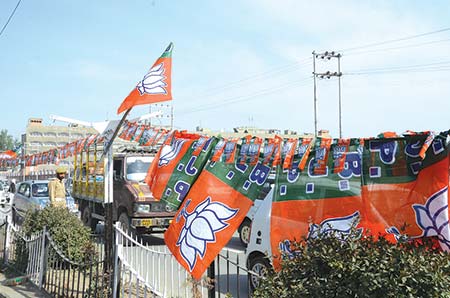 His shop was shut down by the Mussoorie BJP youth wing and the Hindu Jagran Manch after they said they found a video appreciating the Pakistan Army, posted by Ahmad on Facebook. “After getting his (Ahmad’s) shop closed, we and the local traders’ body (the Mussoorie Traders & Welfare Association) went to the police station to file a complaint against him,” The Indian Express quoting the president of the BJP youth wing in Mussoorie, Dharampal Singh Panwar, said.

“Ahmad also came to the police station to file an application about his Facebook account having been hacked,” Mussoorie police station SHO, Rajeev Rauthan, said. He said the alleged “anti-national post” could no more be seen on Ahmad’s Facebook page.

The Mussoorie police seized Ahmad’s phone and submitted it to the cyber cell to verify whether his Facebook account was hacked.

According to the report a concerted effort to get Kashmiri traders ousted from Mussoorie started on June 18, when India lost to Pakistan in the Champions Trophy final and three Muslim boys were allegedly seen on the Mall Road shouting “Pakistan Zindabad”. While none of the three was from the Valley, the BJP leaders and a section of local traders said the Kashmiri traders had “incited” them and other Muslims.