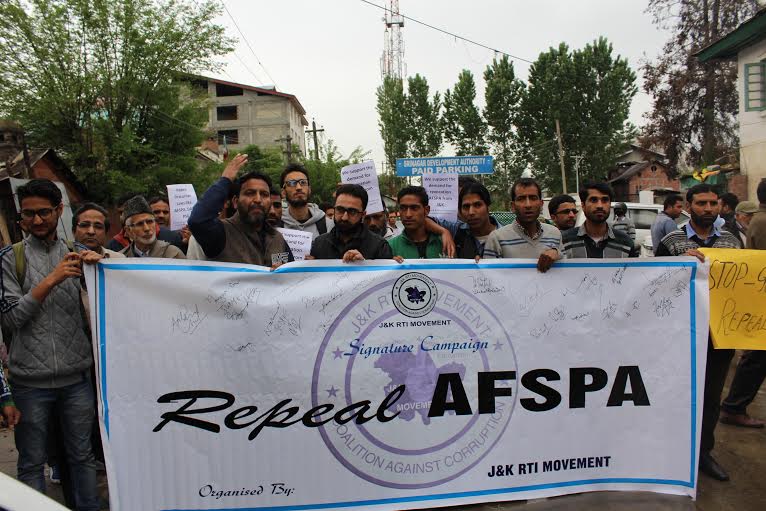 “J&K RTI Movement, Tehreek-e-Jawabdihi and Wake-up Call have taken an initiative to expose the truth about Draconian laws, like Armed Forces Special Power Act” (AFSPA), Public Safety Act (PSA) and Disturbed Area Act (DAA) in place. The message will be taken to masses by creating awareness about the reality of AFSPA and all draconian laws,” a statement issued by J&K RTI Movement said this evening.

A Signature Campaign was launched today (05-May-2016) from Press Colony, Srinagar.

Zareef Ahmed Zareef, a satirist said, “the black law of AFSPA violates fundamental rights, human rights and leaves one with no right to justice. Since 1990, when AFSPA was extended to J&K, it equipped security forces with unrestricted powers including the power to arrest or enter any home or dwelling without a warrant as well as the power to shoot, arrest and kill at the hint of any suspicion. This law has made Army powerful in J&K that they cannot be questioned by legal redress mechanisms. Thus, disappearances, torture, rape, loot and killings have become a regular affair.”

Dr Shaikh Ghulam Rasool, Chairman J&K RTI Movement said, “innocent people are being targeted and killed due to the long implementation of AFSPA in J&K, and we are seeing no end to it. It is high time to intensify all our actions with the best of our abilities, to put the end to the gruesome massacre across J&K. It is because of the silence of larger section of people or political stunt exercises, like merely issuing press statements to condemn the atrocities resulted by AFSPA, that J&K is continuing to suffer on humanitarian grounds. It is time today to break all silence, mobilise in large numbers and protest with our loudest voices to get rid away with AFSPA from our state.” 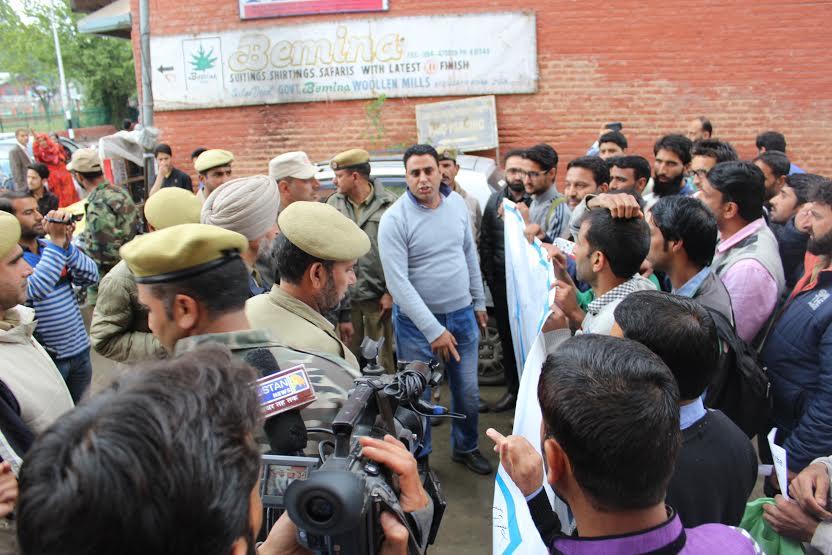 He further added, “it is to remind CM J&K, Ms Mehbooba Mufti, that she was a strongest voice on repealing AFSPA in 2010, while she was representing opposition. Now that she is in Power and holding the highest chair of state, it is her moral obligation to repeal AFSPA that she once stood for.”

An activist Iqbal Ahmed said, “we need to get the point very clear that Government is by the people, for the people and of the people. So it is ‘We People’ who have to decide on repealing this draconian law.”

Junaid Andrabi, Convenor J&K RTI Movement said, “we together stand-up for the fundamental and human rights of our people with a campaign to repeal AFSPA from J&K.”

The statement said that the future course will be to extend signatory campaign to different districts of J&K. “J&K RTI Movement and Tehreek-e-Jawabdihi call upon people, students, citizens, groups and Human rights campaigners from Kashmir and all-round the globe, to join us & show solidarity with people of J&K.”