SRINAGAR: At least two cloudbursts were reported from Kargil that have impacted a mini hydropower project and some houses. So far no casualties have been reported but more than 240 cattle heads were washed away.

The first cloudburst was reported from Khangral village, about 60 km from Kargil on Kargil-Leh National Highway while the second occurred at Sangra, about 40 km from Kargil in Sanku division on Zanskar road. This has led to the closure of Kargil Zanskar Road.

The Tuesday cloudbursts, reports said, almost destroyed the two-unit 1.5-MW Sangra power project located in the Panikhar area. “It has completed been inundated in waters but there were no casualties,” one official privy of the information said. “People manning the powerhouse had left the station and save their lives.”

This has completely stopped the power supply to the region. The project was owned by Kargil Renewable Energy Development Agency (KREDA).

Officials told Kashmir Life that the flash floods were reported in Thang, Gund and Stakpa hamlets falling in Khawos. The floods washed away more than eight houses as 30 houses were partially damaged. The floods also took away 40 cattle and 200 sheep and goats killed. This is in addition to massive damage to crops, fields and trees. Some families have been shifted out. 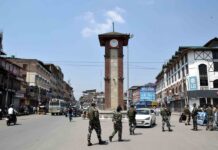