The service exclusively for ladies was started on the instructions of Chief Minister, Mehbooba Mufti, an official spokesperson said this evening.

Speaking on the occasion, DC said that the main aim of starting the separate bus service was to address issue of overloading due to which school, college, and University going girls and women in general had to face lot of inconvenience.

The DC also informed that electronic tickets would be issued to the passengers. 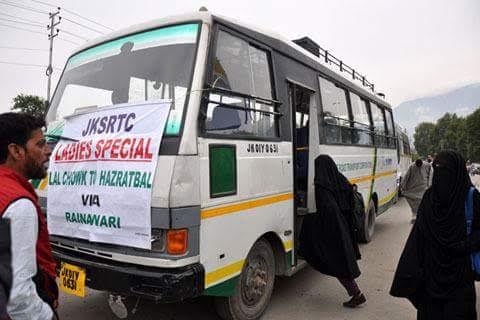 Six ladies special buses will be operated in Srinagar from 8:00 am to 6:00 pm on daily basis by JKSRTC and Private Transporters.

The buses in the first phase will ply simultaneously on three routes-Lal Chowk- Dargah via Rainawari and back; Lal Chowk- Soura via SMHS and return; Nowgam Railway Station to Lal Chowk via Pantha Chowk and return.

The DC said that three buses each will be deployed by JKSRTC and Private Transporters for the purpose.

“These buses will ply on hourly basis. Regional Transport Officer Kashmir and General Manager, JKSRTC will monitor the regular plying of these buses,” the DC said.

It was also decided that subsequently other routes of Srinagar will be covered for which RTO will submit a detailed plan within a fortnight in consultation with SSP, Traffic and representatives of Transporters.

On the occasion, SSP Traffic Maqsood- ul- Zaman said a team of traffic police will monitor the bus services to ensure its smooth regulation.