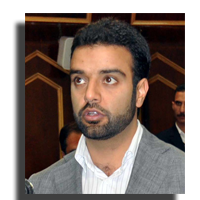 National Conference Friday expressed shock at the “bypassing” of Chief Minister Mehbooba Mufti in a high-level meeting chaired by Home Minister Rajnath Singh in New Delhi on Thursday to discuss various issues pertaining to the State.

“Instead of the elected Chief Minister, New Delhi invited the J&K Governor for the high-level meeting to discuss various key issues pertaining to the State. This is yet another sign of how Mehbooba Mufti has bartered the constitutional mandate and sanctity of the Chief Minister’s office to remain in her chair. This brazen dis-empowerment of the State’s Chief Minister is an alarming development”, National Conference Chief Spokesperson Aga Syed Ruhullah Mehdi said in a statement issued here by the party.

“Home Minister Rajnath Singh chaired the meeting in New Delhi to discuss various key issues pertaining to the State including the issues of rehabilitation of Kashmiri Pandit migrants, return of civilian land by the army, the security situation in the State post the Handwara and Kupwara tragedy and the situation along the Line of Control. While the meeting was attended among others by Defence Minister Manohar Parikar and National Security Advisor Ajit Doval, the State was represented by Governor N N Vohra and not the Chief Minister. The fact that the Central Government has sidelined the elected Chief Minister of J&K in dealing with vital issues of the State and the subsequent conspicuous silence of the Chief Minister doesn’t auger well for the State”, the NC Chief Spokesperson said.

“Mehbooba Mufti’s omission from these meetings indicates a continued erosion of the State’s democratic institutions under the PDP-BJP Alliance and these developments have created widespread disillusionment and resentment in the State” Ruhullah added.