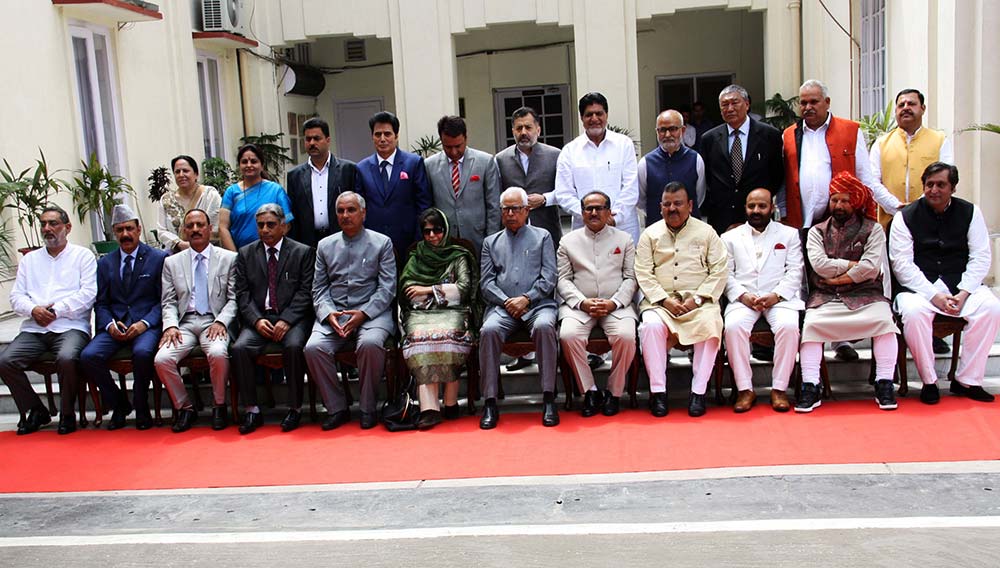 The new PDP BJP government has announced the portfolios of the new council of ministers. Information available with the Kashmir Life suggests a number of ministers whose portfolios have remained unchanged include Dr Haseeb A Drabu, Naeem Akhter, Nirmal Singh, C P Ganga, Zulfikhar Choudhary, Ghulam Nabi Lone and Haq Khan. Many others have reshuffled responsibilities.

Departments which have not been assigned to anybody shall remain with the Chief Minister Ms Mehbooba Mufti.

Dr Drabu is Finance, Employment, Labour and Culture Minister. Akhter will continue to be the Education Minister of the state.

Abdul Rehamn Bhat Veeri is the new Works Minister of the state. He has been given the departments that were earlier being taken care of by Syed Altaf Bukhari who was dropped by Ms Mufti. Veeri will also hold the charge of parliamentary affairs also.

Syed Basharat Bukhari is state’s new Revenue Minister. He will also be in charge of the Relief and Rehabilitation. Earlier he was the law minister and after Javed Mustafa Mir was dropped his assignments have been given to him.

Sajad Lone, Peoples Conference leader who is with BJP, has a new assignment. Instead of Animal Husbandry, he now takes care of the Social Welfare and ARI.

Lal Singh of BJP is now Forests and Environment Minister. Health Ministry which he earlier had has been given to Bali Baghat alomg with medical education.

Sham Lal Choudhary has been given PHE, Irrigation and Flood Control Ministry.

Dr Nirmal Singh will continue to be state’s power minister. Besides, he will be Housing and urban development minister also. He has retained the status of being Deputy Chief Minister.

C P Ganga will continue to be Industries and Commerce Minister.

Syed Imran Raza Ansari will continue to have IT, Youth Service, Sports and Technical Education Ministry

Of the four Ministers of state, Sunil Sharma is the MoS who will run Science & Technology independently. Farooq Andrabi will hold the charge of Haj and Auqaf independently in addition to MoS for PHE, Irrigation, Flood Control, PDD, Industries & Commerce.

Zahoor Ahmad Mir is an MoS who will be in charge of cooperatives, Fisheries, Forests, animal and sheep husbandry.