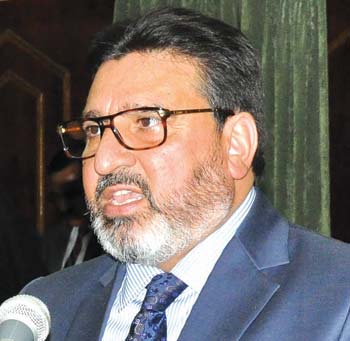 Residents in Thanamadni area of Rajouri district are angry with the government for not fulfilling their commitments on repairing and macadamisation of roads in the area.

Residents told KNS that the road stretches from Bafliaz to Surankote and Thandamadni Rajouri are in worst conditions and non-motorable.

The residents said that the PDP-BJP government had promised to them that the roads will be repaired and macadamised.

“Former chief minister late Mufti Mohammad Sayeed and present chief minister had promised during their public address to macdamise and improve the roads. But those promises are yet to be fulfilled,” they said.

They said that the former Roads and Buildings minister Syed Altaf Bukhari too had made commitments with them to improve the road network.

Confirming his commitment made with the people, Bukhari said that the residents’ grievances are genuine as the government has not fulfilled its promise yet.

“It is a fact that during previous government when I was the minister, we had committed to the people to upgrade and improve the road. Even Mehbooba Mufti too had promised to the people during the public rally to address their grievances about bad roads,” Bukhari told KNS, adding that the “promises we made are yet to be fulfilled.”

“The roads are in worst condition and it is very difficult to move on them in vehicles and by foot,” he said.