SRINAGAR: Train service remained suspended for the fifth day on Monday in Kashmir following the death of Syed Ali Geelani.

An official said a fresh advisory was received from the administration, including police not to resume train service in Kashmir on Monday also.

He said, therefore, no train will chug on Baramulla in north Kashmir to Banihal in Jammu region.

Train service was suspended on Thursday in the wake of the death of senior separatist leader Syed Ali Geelani as a “precautionary measure.” 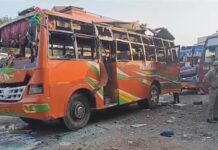 Filthy Washrooms To Lack of Testing and Hostel Facilities, GMC Baramuala Has It All

No Ban On Mankabat At Shrines, Masjids: Waqf Board