Advisor to Lieutenant Governor, Farooq Khan on Tuesday asked Social Welfare Department (SWD) to focus on creating mass awareness about its schemes so that benefits trickle down to the deserving lot. 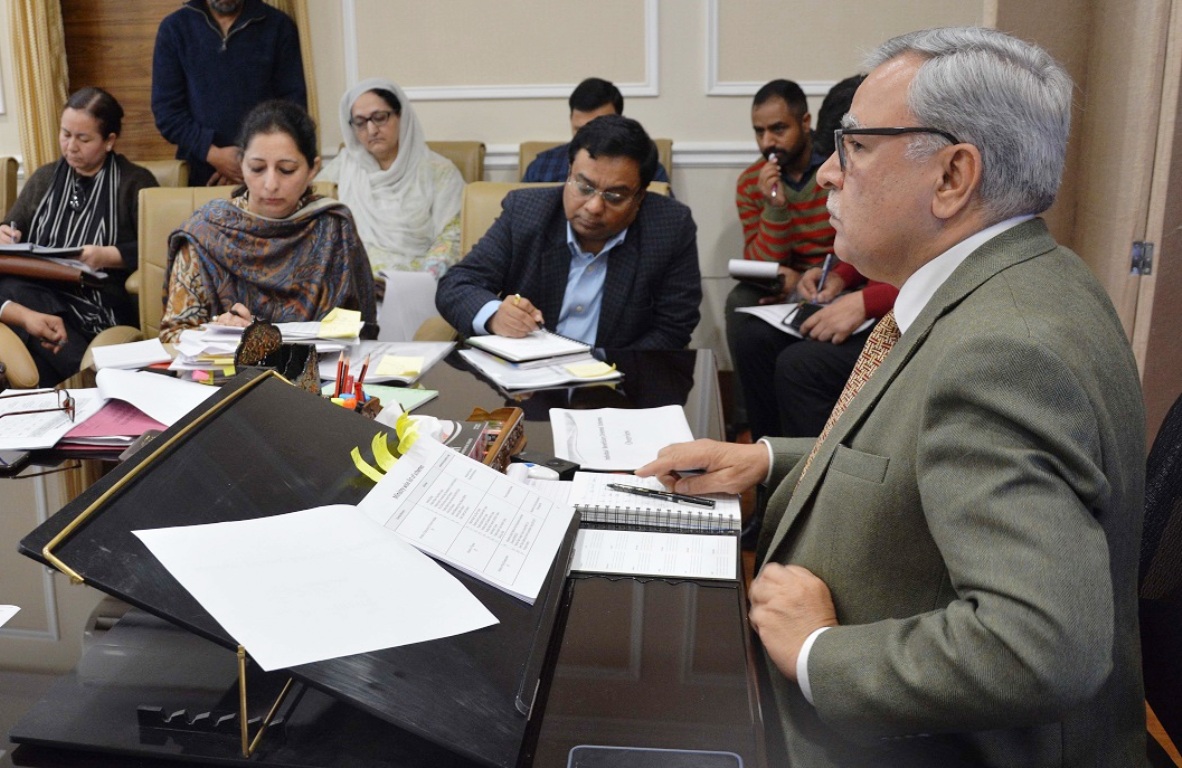 He was speaking at a meeting to review the functioning of the Social Welfare Department.

During the meeting, the Advisor inquired about the functioning of SWD and different Commissions, Boards, besides their achievements, problems and issues.

Concerned Heads presented detailed presentations on the working of their departments.

Addressing the officers, Advisor Khan directed them to launch a massive publicity campaign through the advertisement of schemes in vernacular newspapers so that the message reaches to the targeted section of the society.

The meeting decided to fully address the old-age pension cases of the people above 70 years of age and those with disabilities, while setting December 31 as the deadline to meet the set target. It was also decided to visit few areas of J&K randomly in the first week of January in order to check and review the status of implementation of old-age pension and pension for persons with disabilities schemes.

The Advisor also asked the concerned heads of the departments to compile the data of beneficiaries under various schemes to facilitate disbursement of assistance directly into the account of beneficiary through Direct Benefit Transfer (DBT) mode.  He impressed upon the officers to identify their potential and authority for the betterment and uplift of people of J&K.

Regarding JK Marriage Assistance Scheme, the meeting decided to look into the issues to sort out the same in time bound manner.

The Advisor also stressed upon the use of unspent funds available under different heads.

Asking for providing Prosthetic aids to all those in need of the same, the Advisor directed the department to hold special camps to reach out to them.

Stressing on adding the provision of employability to different women-centric social welfare schemes, the Advisor Khan sought from the Department a proposal envisaging skill development programme on the analogy of Handicrafts Department, including financial implications, to offer skill up-gradation in Social Welfare Centers.

Reviewing the functioning of Integrated Child Development Scheme (ICDS), the Advisor emphasized on providing standard nutrition to the Anganwadi Centers.

During the meeting, it was informed that several recommendations have been made with regard to Post Matric Scholarships/Merit Scholarship Schemes for Other Backward Classes (OBC)s, Scheduled Castes (SC)s, De-notified Tribes (DNTs), EBCs and National Minorities to be transferred to Higher Education Department and Technical Education Department for disbursement thereof.

The meeting was told that under different projects of ICDS a total 35,025 smartphones are to be procured under the schemes, out of which 777 have already been procured. The process of further procurement of 34,248 smartphones has been initiated incurring a cost of Rs.30.67 Cr, it was told.

About the State Rehabilitation Council for Militancy Victims, the Advisor was informed that the council is mandated to provide assistance for physical, psychological and economic rehabilitation of the victims of militancy with special focus on widows, orphans, and handicapped and aged persons whose breadwinner is killed or incapacitated as a result of militancy-related incidents.

It was given out that the pension to widows/old age parents and physically challenged persons is at Rs 1000 per month. And the funds utilized during 2018-19 are Rs 851.68 lakh with 7,040 beneficiaries covered.

It was told that Social Welfare Board is running Crèche Centres, Swadhar Shelter Homes and Short Stay Home for Children affected by earthquakes and women facing socio-economic issues with free boarding and lodging.