Thousands of people on Friday participated in the funeral prayers of Tanveer Ahmad, a 22 year old youth who was killed in Army firing at Beerwah in Budgam district earlier today. 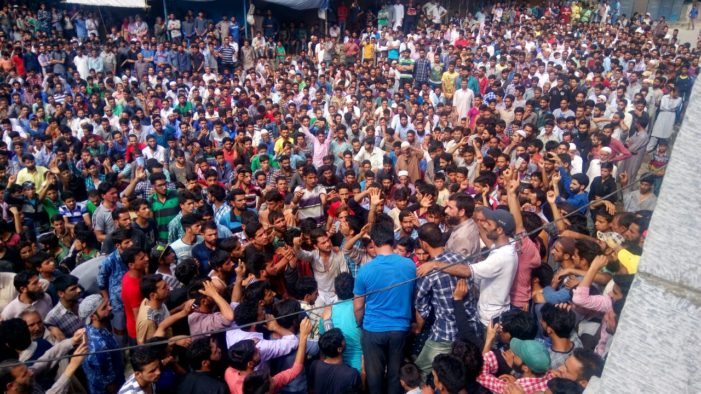 Police said that a Patrol of army was stoned at Beerwah. “Someone among the miscreants also hurled a fire cracker towards the army men. Because of bang the army men thought a grenade was hurled and they retaliated. Two persons identified as Tanveer Ahmed Pala and Mohammed Ibrahim Wani were injured,” Police added.

“Among them Tanveer succumbed to his injuries while Ibrahim is stable,” Police said.

However, locals alleged that a few stones were hurled from somewhere towards the Army men who opened fire and killed Tanveer near his shop. Tanveer was a tailor by profession.

Meanwhile, intense clashes erupted in the town soon after the funeral prayers of Tanveer Ahmad.

Reports said that soon after Tanveer’s funeral prayers were offered and his body was being taken for burial, forces fired tear smoke shells on the mourners.