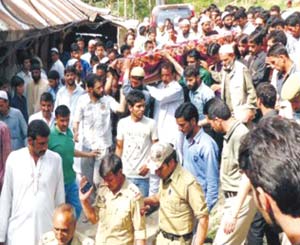 As tourist footfalls and Bollywood crew arrivals are determining Kashmir situation, suicide of Boniyar model Mir Aamir in Mumbai went unnoticed. So did the three days film festival on Kashmir, Kashmir Before Our Eyes that Films Division (FD) Mumbai organized. But Chief Minister made his displeasure public over the portrayal of locales of Kashmir as Manali in Yeh Jawaani Hai Deewani. That, however, did not prevent him rolling out red carpet to Sanjay Khan. Bollywood continues to create news from Kashmir. Kollywood director Vikraman’s Ninaithathu Yaaro completed its schedule in Kashmir with Nimisha in lead. Channel Life OK is about to start telecast of Do Dil Ek Jaan, a love story of a Kashmiri girl and a Mumbai boy that primarily focus on Kashmiri Pandits. Farooque Sheikh who plays a lead character in this serial hosted the crew with Wazwan and that was also news.

Borders prevent physical movements and not emotions. Last week, when Shabnam Kouser, a Gujjaranwala (Pakistan) resident married in Budhal in Rajouri committed suicide by burning herself, her brothers on the other side of the LoC wanted her body for burial. As the local administration in Rajouri started getting countless phone and requests from across the LoC, the burial was delayed by a day. After DC rang up her relatives and convinced them that sending the body is impossible, they had to permit her burial in Thal Daraman village. Police is investigating the factors that led to her suicide.

For the first time Jamat-e-Islami drove Mughal road to have party congregation in Pir Panchal valley. But media might have skipped the event if the 10 taxi drivers would not have been caught by army visiting a place closer to LoC in Tarkundi sector. After being handed over to the police, they said they had gone to a local shrine and were permitted by soldiers manning the fence-gates. Of the 10, eight were from valley and all were drivers ferrying the Jamat activists. They were arrested, produced before the court and bailed out despite Jammu media trying to make a mountain out of the molehill.

Blood, after all, is thicker than water. When a dignitary from Iran lands in Kashmir, it essentially goes to two places – Budgam and Kargil. If Akalis from Punjab come, they go to Tral and Baramulla. Last week, when Afghnaistan’s India ambassador Shaida Muhammad Abdali arrived in Srinagar, he drove to Gutlibagh in Ganderbal where to meet members of the Pakhtoon community.

After more than 270 Kashmiri youth returned from the PaK capital, the local government has effected a change. Now on, Kashmiri refugees will get National Identity Cards (NICs) that entails benefit equal to the citizens of Pakistan. But can they get state subject certificates?

Dutch national Richard De Witt accused of murdering a British lady Sarah Groves on April 6 is being treated for schizophrenia. Admitted to the psychiatric hospital, he has been seeking pizza and coke, a hunger that is not satisfied yet. He thinks his government is spying on him. Now doctors want him to be shifted to National Institute of Mental Health and Neuro Sciences in Bangalore. The prosecution wants him to be mentally fit because they have submitted charges to the court and the formal trial starts on June 15.

People who triggered a media blitzkrieg against a Talibanized Kashmir when the all-girls band Pragaash disbanded, skipped a major news – singer Mehmeet Syed will made her debut in Bollywood by singing two duet songs for a Masala movie with Javiad Ali and Sidhartha Slathia. Though details about the film are not known, Sayeed termed the film a love story set in Kashmir. A singer since 2004, the 27 year old sold nearly 50000 VCDs and 75000 audio cassettes of her first album. Since then, she has had scores of popular albums. She had stopped singing after her mother died in August 2011. Now, Bollywood came calling and she could not resist. The last Kashmiri who sung for Bollywood was Saim Bhat in Murder 2.