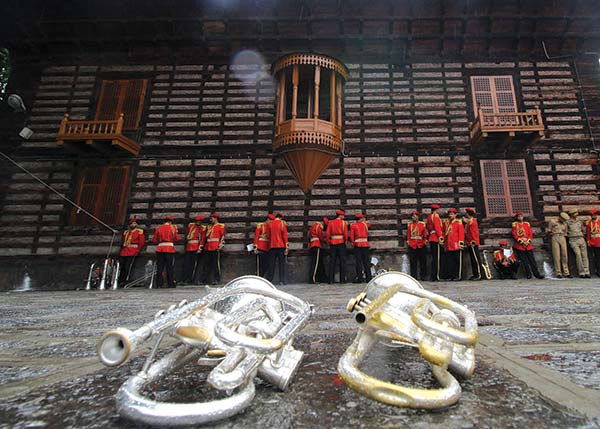 Ruling PDP faced embarrassing music from its ally BJP on Martyrs Day that the latter boycotted. This happened for the first time in post-partition history that part of the government boycotted a function and sided with the side of the killers and not the slain. To add to the insult, some of the ministers in the government claimed they were unaware of some martyrs day! Red faced PDP ate the insult to keep the head clear and keep the coalition going.

pparently taking the ISIS route, the militants in Tral meadows have seemingly started using the virtual media. Last time, they uploaded their photographs on a Facebook page that sent police to seek permission from the judiciary to close it down. As the page was closed newer ones emerged. As the police was busy thinking the follow up, the militants uploaded their videos. In full battle gear, armed to teeth, they are seen strolling and talking in the woods. Strange, it seems that when city is facing an acute crisis to have better connectivity, Tral is better connected!

Part of Kashmir was under flood and they locked all the schools. Every time Jhelum surged, schools were under lock and key. At the peak of heat wave, government decided against summer holidays. So much pressure was on schools that they held term exams during fasting. Now the latest is that 500 students from 15 city schools are being selected to sing and dance for a month to prepare for the open air grand conclusion of Kashmir Sufi music festival Shashrang in August.

Under Rashtriya Madimik Shiksha Abyan (RMSA), Kishtwar got Rs 15 lakh for its 68 high and higher secondary schools in last three years to take the students for excursions. Money was transferred to the 68 institutions and shown spent as well. But no school was on excursion. In fact 12 schools could not have availed this grant as they had zero-enrollment in tenth standard! The money was withdrawn and spent during the Governor’s rule in 2015.

A pro-right think-tank Jammu and Kashmir Study Centre (JKSC) is reportedly gearing up to challenge Article 35 A in the Supreme Court. India’s constitution incorporated this through the Presidential Order on May 14, 1954. The group says parliament cannot be bypassed. Article 35A enables the state Assembly of J&K to define ‘permanent residents’ and to give them special rights and privileges. The petition is aimed at diluting J&K’s state subject norms so that overall demography is fiddled with, a target it has set for itself for a long time now.

Weather conditions triggered yet another tragedy last week when a cloud burst killed a mother with her three children. She was wife of Zakor, a nomadic Bakerwal from Rajouri who was with his herds in Aru valley. The cloudburst triggered flashfloods in the belt. A similar flashflood in Jammu forced IAF to rescue as many as 33 BSF personnel when their Ramgarh post inundated under 10 ft water of Basanter rivulet.

The crucial Rs 3,720 crore Chenani-Nashri road tunnel that will eventually reduce the length of travel to Jammu by 31-km and reduce travel time by about two hours is drilled completely. India’s Road transport and highways minister Nitin Gadkari was on the site last week to witness the last phase of the drilling that a Kashmir company carried out. The 9.2 kms tunnel, Gadkari said would save Rs 27 lakh of fuel a day. It will take one more year to get ready for use. Alternative highway between Jammu and Srinagar would reduce distance by 91 kms but most of its stretches are yet to be taken up, especially from Kashmir side.