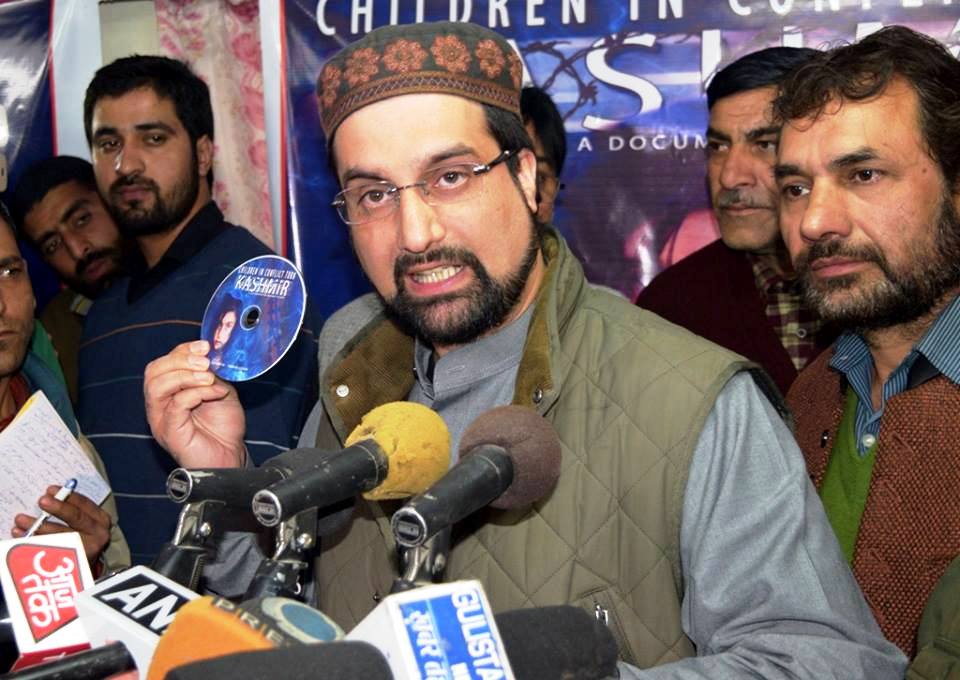 Hurriyat (m) Thursday while screening the documentary “Children of Conflict Torn Kashmir” at APHC headquarters in Rajbagh, Srinagar announced that the documentary will be screened next week at United Nations.

The documentary screening was Wednesday “stopped” by the administration when it was scheduled to be held in a local hotel here.

The documentary has been made by Mannan Bukhari of the Human Rights Division of Hurriyat (m).

Among those who were present on the occasion including Mirwaiz Umar, chairperson APHC; Bilal Lone, Abdul Gani Bhat, other members of Hurriyat (m), members from media and civil society.

On the sidelines of the screening, Mirwaiz lashed out at the administration for not allowing them to screen the documentary as per schedule.

He said that the government doesn’t want the world to know about the actual happenings in Kashmir, however, he said, “It is not going to stop us. We will be screening the movie in the already started 31st session of the United Nations in Geneva next week.”

“Hurriyat will send the DVDs to all the embassies and Human Rights groups so that they will get to know about the impact of the Kashmir conflict on Kashmiri children.”

Mirwaiz said that the behaviour of police and paramilitary forces with the children of Kashmir is shameful and that they subject the children in the age group of 10-13 years to severe torture, hold them in illegal custody and harass them. He said that more than 700 FIRs have been lodged against children in various police stations across the state, officially.

However, he claimed the number is much higher. He also said that there are more than 2,14,000 orphans in the state and among them half are orphan due to the conflict.

Mirwaiz claimed that among the orphans, majority are half orphans—those whose parents have disappeared.

Kashmir’s head priest said that the Kashmir conflict is taking a huge mental toll on children.

On the current political situation, he said that the political, social and religious activities of the pro-“freedom camp” are being stopped.

“Government is trying to create a pattern of detentions, suppression.”

However, he warned that it will have a serious reaction from the camp. He said the government is pushing youth to the wall. “That is the reason our educated lot is forced to take up guns.”

“People in JNU raised voice and protested. However, in Kashmir we are facing teargas shells and flash bang grenades. Our space has been choked and therefore youth are picking up guns.”

He further said that Kashmir is not a law and order problem rather a political problem.

“India and Pakistan have to sit with Kashmiris and find a long lasting solution to Kashmir problem,” Mirwaiz said. “India is trying to procrastinate the Kashmir issue and therefore wants to take control of the situation. However, that is not going to happen. Government is mistaken.”

Kashmir problem is a reality and it cannot be undone by these “cheap” tactics, Mirwaiz said.