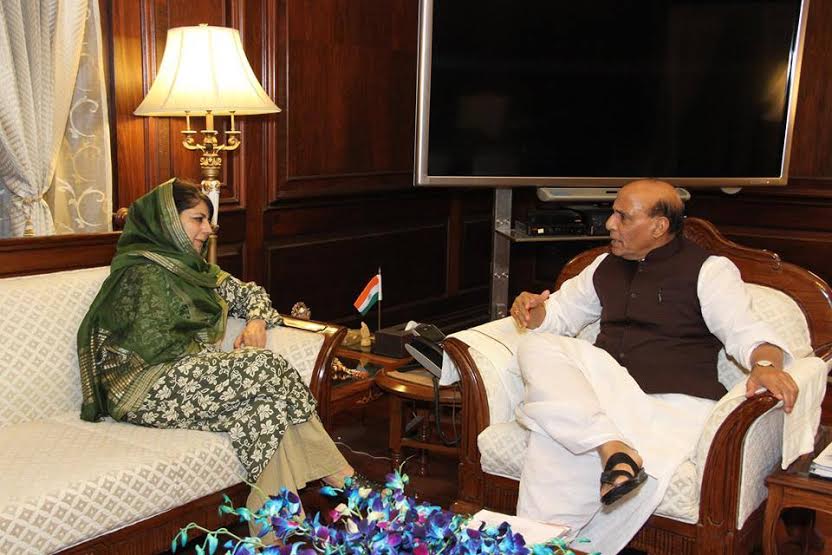 This is Mehbooba Mufti’s first visit to New Delhi after taking over as the Chief Minister of the State, an official spokesperson said this evening.

During her meeting with Rajnath Singh, the Chief Minister discussed the proposals of the State government presently under the consideration of the Ministry of Home Affairs (MHA) which include continuation of modernization of Police Force Scheme, revised ex gratia scheme which includes loss to livestock due to cross border firing and exemption of security-related expenditure on account of deployment charges.

In order to broaden the scope of cross-LoC trade and travel, described by late Mufti Mohammad Sayeed as the biggest CBM between India and Pakistan, the Chief Minister proposed opening of additional routes and crossing points across the Line of Control. These routes include Kargil-Skardu, Jammu-Sialkote, Turtuk-Khapulu, Chhamb Jorian-Mirpur, Gurez-Astoor-Gilgit, Titwal-Chilhas, Jhangar (Nowshera)-Mirpur and Kotli.

On adopting non-lethal means in better crowd control to prevent loss of precious human lives while dealing with law-and-order situations, Rajnath Singh assured the Chief Minister of full support from the MHA. 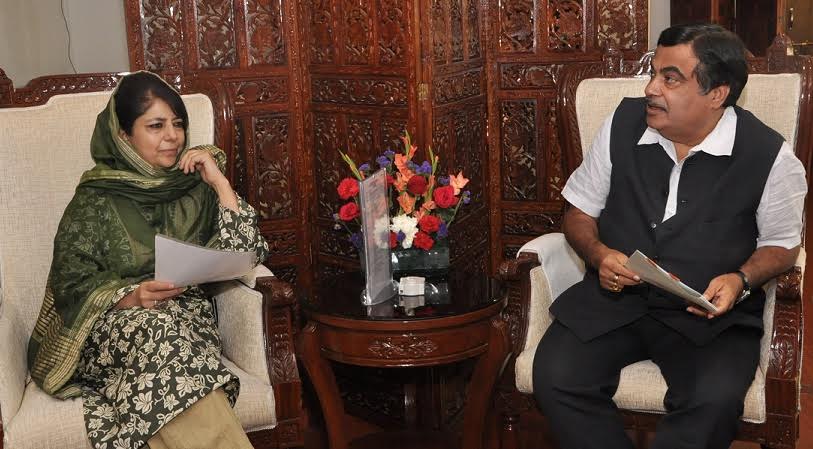 The Chief Minister welcomed the Central government direction asking the state governments to appoint Nodal Officers to ensure safety and security of students from J&K who are pursuing studies outside the State.

The issue of Inner Line Permit for foreign tourists for visiting various parts of Ladakh also came up for discussion during the meeting.

Mehbooba Mufti also requested the Union Home Minister to clear the proposal for restoration of damaged infrastructure in Police department due to floods of 2014. A proposal amounting to Rs 286.57 crore has already been sent to MHA in this regard.

The Chief Minister also urged Rajnath Singh to take an early decision on the State government’s proposal to recognize Nepal route as one of the routes under the policy framed for returnees.

On the return of Kashmir Pandits, the Chief Minister said not only the State government but the people of Jammu & Kashmir want return of Kashmiri Pandit community to the valley with dignity and honour as the cultural milieu of Kashmir without them remains incomplete.

In her meeting with Nitin Gadkari, Mehbooba sought higher allocation under CRF (Central Road Fund) for the State.

The Union Transport Minister assured Mehbooba Mufti that once UCs (Utilization Certificates) for Rs.848 crore are received, an amount of Rs. 350 crore will be further released under CRF. So far, UCs amounting to Rs.801 crore have been sent by the R&B Department, the meeting was informed.

Mughal Road was sanctioned under PMRP and completed at a cost of Rs.640 crore.

For providing alternate connectivity to Chenab Valley, the Chief Minister requested construction of a National Highway from Lakhanpur to Doda via Ranjit Sagar Dam, which will provide a huge fillip to the tourism potential of the region.

Mehbooba Mufti also raised the issue of inclusion of more projects under Bharat Mala and Inter-State Connectivity Projects (ISC) so that better road connectivity is provided to people in the state.

She was informed that except Qazitur-Tangdhar Road for which certain clarifications have been sought from the Public Works Department, bids have been received in case of Baramulla-Gulmarg and Poonch-Uri Roads and the work on the projects will be allotted shortly.

On upgradation of Batote-Kishtwar-Sinthan-Khanabal Road under Bharat Mala, it was given out that the bids will be reviewed by the Road Transport Ministry by May 10 and the work will be allotted 15 days thereafter. In the meantime, the Chief Minister was informed that Rs.90 crore will be released to the State government for basic maintenance of the road.

The Union Transport Minister assured the Chief Minister that he will get the proposal submitted by the State government examined on priority.

As regards the issue of rationalization of toll collection, a demand raised by the Chief Minister, he said the proposal submitted by the State government will be prioritized.

The Chief Minister assured Nitin Gadkari that the State government will extend full support in land acquisition for construction of ring roads in the two capital cities of Jammu and Srinagar.

The Union Transport Ministry has already started the process of framing the DPRs so that the work on the two prestigious project is started in earnest.