Chief Minister, Mehbooba Mufti, Tuesday described providing a sense of security to the youth in the state as one of her prime responsibilities.

She said people in Kashmir are in pain and suffering and sought cooperation of the Prime Minister, Narendra Modi, in addressing the issue so that no more innocent lives are lost to mindless violence. “We have witnessed several tragic incidents in the past, like in Baljarala in Rajouri, Chittisinghpora in Islamabad and more recently in Handwara, where innocent people have been fatally caught in the vortex of violence. We need to take immediate steps to bring an end to this permanently,” she stated.

Sharing the dais with the Prime Minister for the first time after becoming the Chief Minister of the State, Mehbooba Mufti said the Central and the State governments will have to overcome the challenge and join hands to win the hearts and minds of the people, especially the youth. 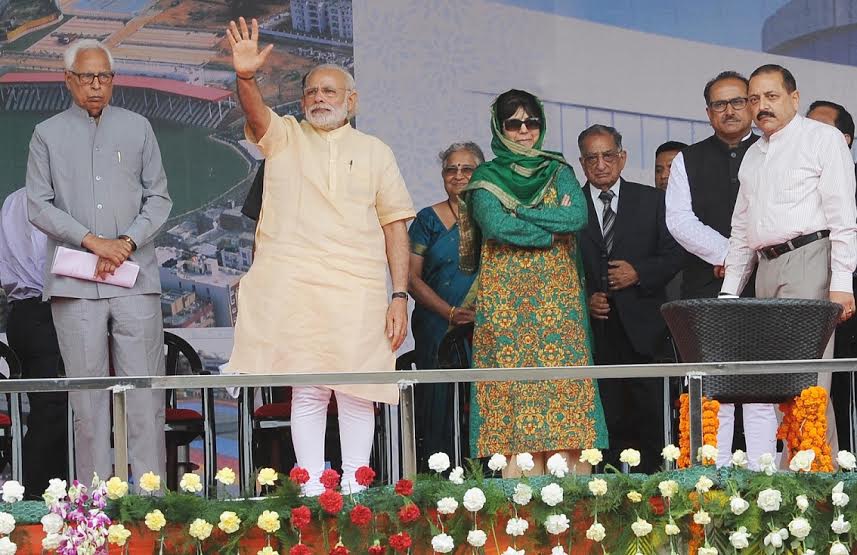 “I have great hope and expectations from my party’s alliance with the BJP. My father said on many occasions that when he shook hands with Narendra Modi, he was, in fact, joining hands with a billion people of India who had reposed their faith in his leadership,” she said, promising to pick up the threads from where her father had left them.

The Chief Minister observed that even though J&K has been an epitome of plurality and cultural diversity, the pain and agony suffered by people of Jammu and Kashmir for the past 25 years continues to disturb her. She said time has come to end the State’s predicament and devise a new strategy that promises an era of sustainable peace and development.

The Chief Minister said once we are able to build trust among our youth, they will also be able to flourish and contribute in the growth of the country.

Comparing India’s rise on the world stage with that of its troubled western neighbours like Pakistan and Syria, Mehbooba Mufti said there are quick lessons to be learnt from the trail of death and destruction left behind by ethnic and sectarian violence. “The instability in these countries is in sharp contrast to the strengthening of democratic institutions in India. Despite being homogenous societies, these countries have been unable to stem the rot, forcing people, like in case of Syria, to seek refuge out of their homelands,” she observed.

Praising India for its global rise as a ‘Knowledge Society’, the Chief Minister sought liberal financial assistance from Centre in the Higher Education segment to create enough employment opportunities to absorb our talented human resource. She also praised Mufti Mohammad Sayeed’s vision to promote academic excellence by establishing new universities like SMVDU, Baba Ghulam Shah Badshah University in Rajouri and Islamic University of Science and Technology at Awantipora. “Creating opportunities of employment for our graduating students will remain the focus of my attention,” she promised.

Mehbooba Mufti also had a word of appreciation for Shri Mata Vaishno Devi University for ably demonstrating how endowment money can be channelled back into the society by creating durable assets. “I am happy that SMVDU has become a role model for the rest of the institutes of higher learning to emulate,” she stated.

The Chief Minister described J&K as a Miniature India, chosen by Lord Shiva and Mata Vaishno Devi as their abode. She also shared some of her anecdotes with the audience by vividly remembering her frequent visits to the holy town of Katra during her college days. “It gives all of us a sense of great pride that devotees from all over the country come to J&K in droves to pay their obeisance,” she remarked.