Chairperson of Dukhtaran-e-Millat, Asiya Andrabi on Saturday said that whenever the “so-called” elections are conducted in Jammu and Kashmir,  “oppression and brutalities” against the people go up.

In a statement issued here this afternoon, she said that while Delhi is going to conduct the “drama” of elections in Srinagar and Islamabad, with it, the forces in collaboration with the state government have increased the oppression and brutalities against Kashmiris. 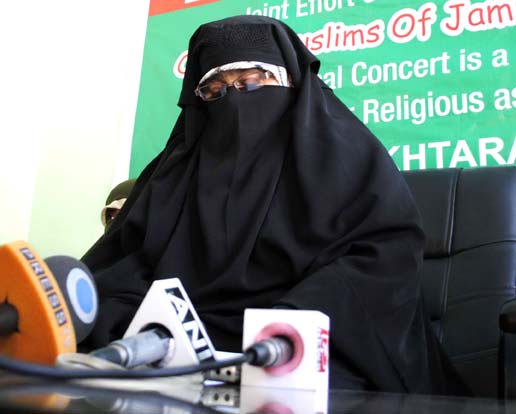 Andrabi said that from 10-year-old boys to 80 year old men, forces have detained every “pro-resistance” person across the Valley.

“Our innocent children from South, central and north Kashmir are being arrested during nocturnal raids from their homes. Ironically, those children who have been injured by pellets and have lost eyesight completely or partially and have to visit hospitals for regular checkups are being rounded up from hospitals and are booked,” she said.

She said that Indian media is staging fake interviews to defame the movement. “An Indian news channel staged a fake story showing how boys ‘are paid for pelting stones’ and the next day it came to fore that as to how these teenagers were forced into such interviews.”

Mrs Andrabi reiterated her call for complete boycott of elections. “The pro-resistance people must understand that participation in elections gives India a chance to tell the international community that Kashmiris are with them, which ultimately harms our cause to a large extent,” she said.