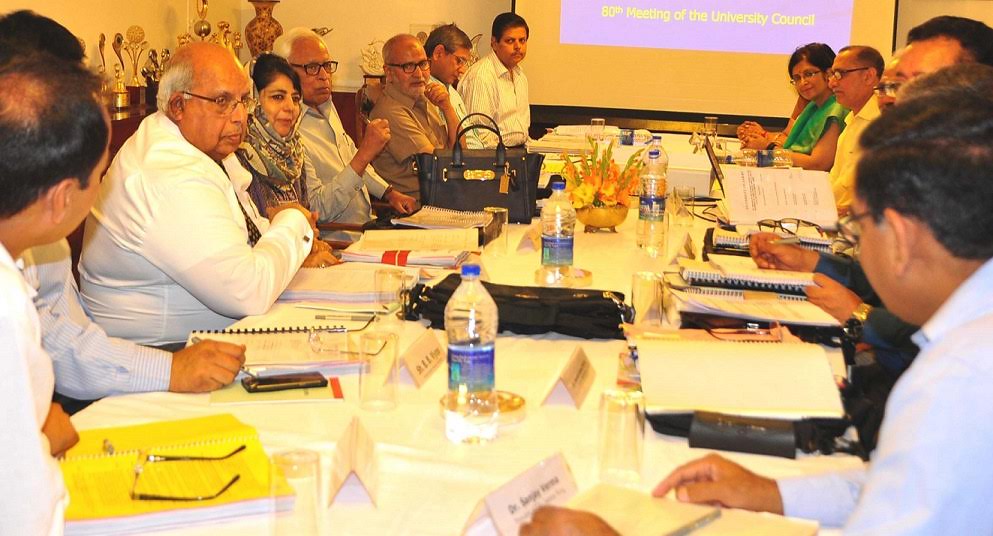 Governor and Chief Minister Ms Mehbooba Mufti, Pro-Chancellor of the University, stressed the need for ensuring that the subjects to be taught at the main and off-site campuses of the universities are relevant and have the potential of opening up new opportunities for the all-round development of the area, an official spokesperson said this late evening.

Governor observed that the teaching faculties of the university campuses should be also concerned about dealing with the deficiencies among the faculties of the colleges and higher secondary schools and evolve approaches for establishing linkages with the teachers and their institutional programmes.

Both the Chancellor and the Pro-Chancellor felt the need for critically reviewing the current relevance of the on-going programmes vis-à-vis demands of the emerging job markets.

They advised the universities to keep dynamic watch over the courses sought by J&K students in universities outside the State so that the same could be considered for being introduced in the J&K universities.

The Chancellor, Pro-Chancellor and Naeem Akhtar, Minister for Education, urged both the VCs to identify niche areas and strengthen those study fields and elevate their research standards to add value and raise the standing of the universities all over India.

The Council also discussed the functioning of the off-site campuses and urged Prof Sharma to critically review their academic functioning.

The Education Minister suggested introduction of under-graduate integrated courses in the off-site campuses of the Universities.

While reviewing the upcoming infrastructure in the University, the Governor stressed introduction of rain water harvesting and solar power generation facilities. He also emphasised the importance of maintaining discipline and decorum in the institutions of learning.

Congratulating the Jammu University on securing the 64th rank out of 233 universities under the National Institutional Ranking Framework, the Governor exhorted the Vice Chancellor to improve on parameters in which university had low scores and secure higher ranking next year.

The Council ratified the guidelines for conducting written examination for Persons with Disabilities issued by the Department of Disability Affairs, Government of India. A person who has 40 % or more disability shall be allowed the facility of Scribe/Reader/Lab Assistant and other required support if he so wanted.

The Council approved the proposed introduction of short term courses in various departments and affiliated colleges of the University.

The Council also approved proposal for admission of foreign students in the University of Jammu without appearance in the Entrance Test (JUET).

Informing the Council about initiatives taken in improving the Examination system, Prof Sharma said that the University has introduced online pre-filled and auto generated examination forms for under graduate students and an MoU is being drawn up for online depositing of fees.