He was a reluctant speaker at the Iqbal Day function at M A Road Women’s College, an event he presided over.

“It pains me when I see his poetry reduced to (display) hoardings and to mere slogans with the onslaught by truck-and-two-wheeler literature,” Akhtar told the function. “Now everything is being named after him, we already have a marriage hall in the memory of great Kashmiri origin poet.”

Despite being the illustrious son of Kashmir, the minister said, his society has literally “pushed him out” as everybody talks and uses him and nobody pays heed to what he has said. “Iqbal connected himself with Kashmir’s glorious past and emerged the most positive, modern and concerned Muslim voice,” Akhtar said. “What has happened to his movement for global competition, modern education and self-sufficiency? How long can we invoke out past to destroy our future?”

Akhtar said Iqbal was proved of a knowledgeable Kashmir that had Shardapeth in its past. “We can we regain that status again?” he asked. He regretted that Kashmir has landed in a state that it is unable to either pronounce Urdu or simply write it.

He pointed out to a glaring instance in the hoarding on the podium that, he said, pained him. He extensively quoted from Iqbal’s Persian poetry to bring home his love for Kashmir.

The minister was happy that some of the students are so keen to experiment with entrepreneurship while being in college. He tasted various foods that the students had displayed for sale within the premises. 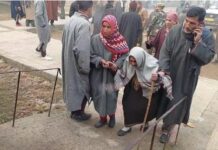