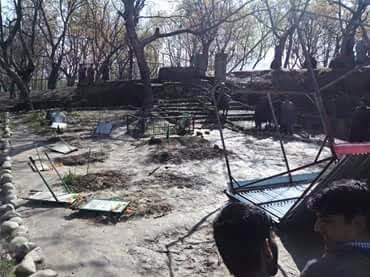 While condemning the incident, Dukhtaran-e-Millat chairperson Asiyeh Andrabi Friday said that the “vandalistaion” of the “Martyrs graveyard” by “Indian army shows the true face of this occupational force”.

A statement issued by the party spokesperson said, “The ransacking of the graveyard shows that Indian army is afraid of these martyrs as well and want to erase any symbols or marks of these brave-heart martyrs.”

She said that the quantum of people who participated in the funeral of the “Martyrs” is a slap on the faces of India, it’s armed forces and their “local stooges” as they themselves had to hire people for the funeral of a chief minister.

After the “exemplary” funeral of Abu Qasim, in a knee jerk reaction they stopped handing over  the bodies of foreign militants to  the local people and now after seeing the love of people towards militants their egos were just so much that  they “stooped” to a new low of ransacking graveyards. “Such actions and tactics will not deter us from taking this anti India resistance movement to logical conclusion and we will celebrate our success of struggle on graveyards of our martyrs who are our real heroes and ideals.”