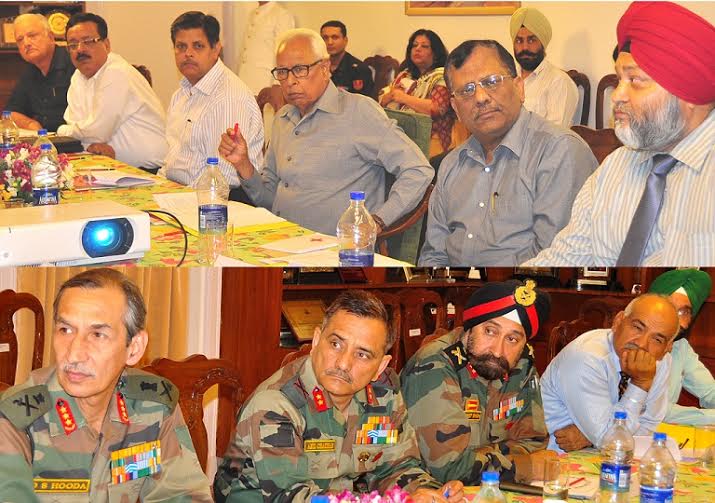 Governor NN Vohra, President J&K Rajya Sainik Board (RSB) emphasized the need for ensuring that there is an institutionalized system from the village to the State level for hearing and promptly settling the grievances and problems faced by serving Defence Personnel, ex-Servicemen (ESM), widows and their dependents. He gave this direction while presiding over the 78th Meeting of J&K RSB at the Raj Bhavan. The Governor asked the State Home Secretary, RK Goyal, to ensure that instructions in this regard were early issued to all concerned echelons. Goyal was deputizing for the Chief Secretary at this meeting.

The Governor also directed the State Home Secretary and Director Sainik Welfare to take urgent steps for collecting data about all essential aspects of ex-Servicemen and their families. The availability of such data would enable the preparation of target oriented and pragmatic policies and programmes for promoting the welfare of all serving personnel and ex-Servicemen who belong to J&K.

Later in the day, the Governor chaired the 63rd Meeting of the State Managing Committee for Funds (SMC), which discussed various issues relating to the support being provided by the Kendriya Sainik Board to the J&K Rajya Sainik Board for implementing various welfare schemes for ex-Servicemen.

SMC also approved increase in subsidy from Rs. 1500 to Rs.2500 being paid to the wards of ESM and Widows undergoing SSB training/coaching and enhancement of Daughter Marriage Grants from Rs. 12,000 to Rs 16,000.

Brig. (Retd.) Harcharan Singh, Secretary, Rajya Sainik Board, made a  detailed presentation and provided details of the various measures taken for the welfare of the ex-Servicemen and financial status of the Board. The Governor lauded the efforts of the RSB for collecting Rs. 40 lakh under Flag Day Fund this year as compared to Rs. 15.79 lakh last year. He also informed that Rs. 3.81 crore was disbursed to 1892 cases during 2015-16  under welfare grants from J&K Government on account  of WW-11 Relief, Miltia Relief, Penury, sewing machines, wheel chair, house repair, educations scholarship and gallantry awards. Rs. 31.57 lakh was disbursed to 1433 cases of penury, marriage, demise and one time incentive and medical relief from the Flag Day Fund.