The existing health infrastructure is under massive load. There were grim images of patients moving to the hospitals with their personal or borrowed Oxygen concentrators and cylinders in Kashmir as well as in Jammu. Not many beds are available right now. Massive crowds are reporting to the hospitals and testing centres for mandatory tests and re-tests and inadequate staff is adding to the crisis.

As many as 41 deaths took place in Jammu and 24 in Kashmir divisions, the information revealed by the government said.

Jammu town continues to top the list of the dead for yet another consecutive day. It lost 28 citizens in the last 24 hours. Srinagar, the other capital city lost eight residents.

The district-wise details suggest that Kashmir lost six citizens in Anantnag, two each in Pulwama, Baandipore and Budgam and one each in Baramulla and Kulgam.

Apart from 28 deaths reported from Jammu city, the region lost six citizens from Udhampur, three each from Kathua and Samba and one from Rajouri.

In the last 24 hours, officials said 4352 new Covid-19 positives were reported from across Jammu and Kashmir. Of them, Srinagar alone accounted for 846. Jammu, the other capital of the erstwhile state reported 602 cases.

Of the new cases detected in the last 24 hours, Kashmir accounts for 2644 cases against 1708 of the Jammu division.

Right now, Kashmir has 32660 active positive cases and Jammu has 18041, slightly less than half of Kashmir. 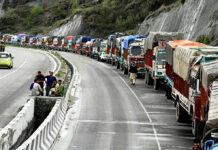