SRINAGAR: All Parties Huriyat Conference (g) on Sunday said that Kashmir is neither bilateral issue nor a conflict related to borders between Pakistan and India. 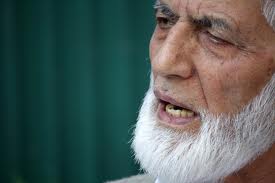 Commenting over the statement of PDP leader Mehbooba Mufti, wherein she had said that’’ there is no place for third party mediation on Kashmir’’, Hurriyat reiterated its stance that besides India, Pakistan & people of J&K, the UNO constitute as fourth party to the disputed issue of Jammu & Kashmir.

“There is every apprehension that situation may go from bad to worst and turn like that of Syria, Iraq & Afghanistan, if the mediation of UN body or any third country is not solicited or accepted,” said Huriyat. “India and Pakistan have failed to solve Kashmir problem bilaterally. No tangible progress was observed through agreements viz Shimla and Lahore Declaration.”

The situations remained unaffected between the two, said Huriyat and added that despite 150 rounds of negotiations between Indo-Pak, there is no letup in bloodshed in Jammu Kashmir, said Huriyat.

The situation in Syria and Iraq are quite different from that of Kashmir dispute, Huriyat said. “Kashmir is long pending issue on UN agenda and Its international status is a recognized fact and beyond question,” it said. “India is a signatory to the instrument, agreed upon by Pakistan and International community and India has promised to ascertain the aspiration of people in J&K through right to self-determination.”

“There is nothing bad and nor anyone need to feel displeased or annoyed if any of the influential and powerful country offer their services to resolve this long-pending dispute,” the statement said. “International community has always lauded and appreciated intervention of third parties in the resolution of all conflicts.” Huriyat said that situation can go beyond control, if the resolution is unnecessarily delayed and hence will give rise to situations like that of Syria and Iraq.