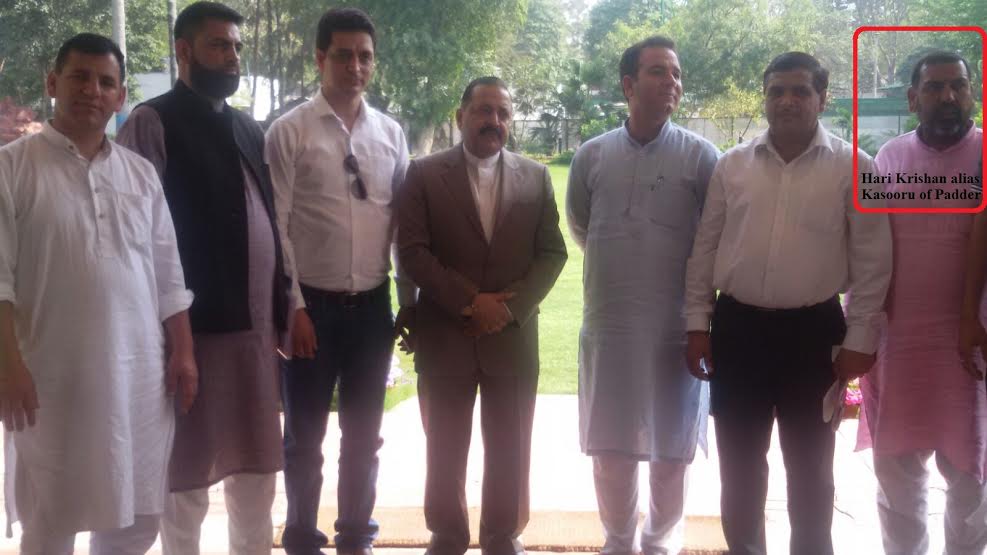 Creating a political storm, main accused in the killing of a Muslim labourer has been roaming freely and posing in a picture with three BJP legislators of Chenab Valley and Union Minister Dr Jatinder Singh. The picture has gone viral on social media.

Even as authorities “know” whereabouts of Hari Krishan alias Kasooru of Padder (Kishtwar), the main accused in the killing of Lassa Khanday during Kishtwar riots 2013 has not been arrested allegedly due to political pressure from the saffron party.

During infamous riots of August (2013) Khanday was dragged out of an ambulance by the mob allegedly led by Hari Krishan alias Kasooru of Padder (Kishtwar) when he was shifting his wounded son and brother to the hospital during the communal violence in the remote area.

Khanday was allegedly beaten to death and his body was recovered after two days, as per the family members. The riots in Kishtwar had left over 100 business establishments raised to ground, gun houses looted, and loss of three lives.

During the course of investigation and account of eyewitnesses, the name of Hari Krishan alias Kasooru of Padder surfaced and a case against him under section 302 of RPC was registered in the concerned police station.

Though he was booked and investigation was taken up, he was never arrested due to alleged pressure from saffron party. The picture has created a political storm in Kishtwar especially after the main accused in murder was  found posing with MP and Union Minister Dr Jatinder Singh, MLA Kishtwar Sunil Sharma, MLA Doda Shakti Parihar, MLA Bhaderwah Daleep Parihar, Tariq Hussain Keen and Showkat Daing (both from BJP).