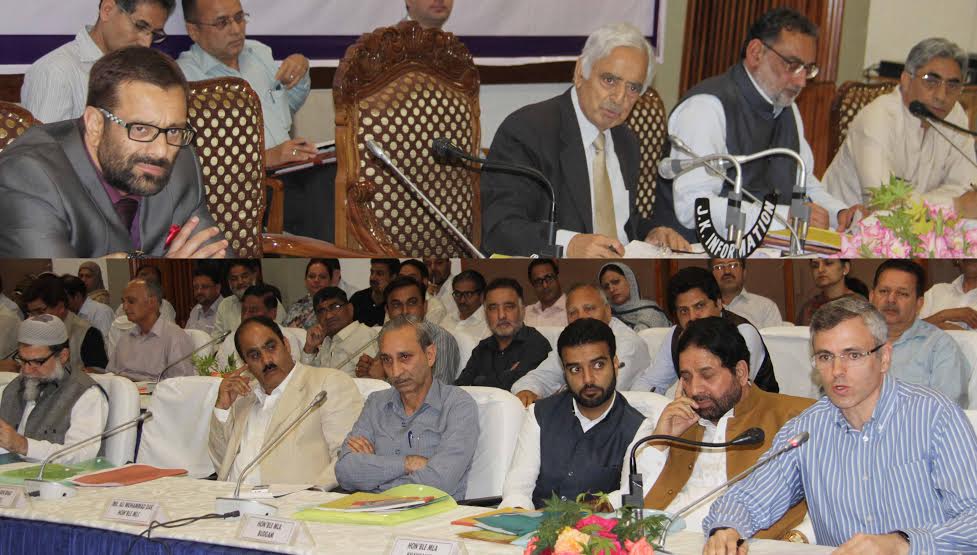 Sending a loud and clear message to the administration in unequivocal terms, Chief Minister, Mufti Mohammad Sayeed, Wednesday stated that the officers will be solely tested by their integrity and performance in improving the public delivery mechanism in the State.

He said the biggest drawback in the system has been the inability of the officers to utilize the available resources fully, a trend that needs to be reversed immediately. “Being honest is commendable, but I want results and for that you will have to deliver on ground,” he said while addressing the officers during the District Development Board (DDB) meetings of Srinagar and Budgam, here today, an official statement said.

While Rs 120.80 Crore Annual Plan for Srinagar district has been approved, a Capital Expenditure Plan outlay of Rs 168.02 Crore for District Budgam was passed in the Board meeting today.

Describing Srinagar as the crown of Kashmir Valley, the Chief Minister announced an additional Rs 20 Crore to the proposed Capital Expenditure Plan of Rs 100.80 Crore for the summer capital this year.

According top priority to rebuilding infrastructure and compensation for houses damaged in Srinagar when Jhelum savagely breached its banks in 2014, the Chief Minister assured that all protection measures will be taken to thwart the threat of floods.

“De-silting river Jhelum and the spill-over channels, besides strengthening of the river embankments will be expedited. But, to save Srinagar city from persistent threat of floods, my Government will pursue with Centre the Rs 2200 Crore project for construction of alternate flood channel from Dogripora to Wullar so that floods which we experienced last year do not come back to haunt us again,” he stated.

In order to rid the summer capital of the continuous problem of water-logging that accentuates during relentless rains, the Chief Minister announced setting up of 10 new dewatering stations in the most-affected areas of the city.

Amidst social sector spending boost for Srinagar district, which also focuses on improvement in the Health sector, the Chief Minister announced a revolving corpus fund of Rs one Crore for Sher-e-Kashmir Institute of Medical Sciences (SKIMS), Soura, for treatment of poor cancer patients, who are not able to afford huge medical expenses. He also asked the Health & Medical Education Department to speed up proposal for developing Kashmir Nursing Home as an independent Cancer Centre so that people who grapple with the deadly disease are provided instant medical treatment.

Keeping in view the huge rush in GB Panth Children’s Hospital, Sonwar, the Chief Minister also announced construction of a new Paediatric Hospital, in close proximity of Lal Ded Maternity Hospital. “Till plan for additional children’s hospital is conceived, the Health Department will augment manpower and install new machines at GB Panth Hospital to cater to the needs of the child patients,” he said.

Welcoming the establishment of NITI Ayog which guarantees State’s share in Central taxes, Mufti Sayeed said the new system of financing as per award of the 14th Finance Commission has assured J&K of its due share in Central funds.

Placing high priority on filling up of vacancies on a fast-track basis, the Chief Minister said the Cabinet Subcommittee recommendations have been announced. “Under the proposed Recruitment Policy, we will make it mandatory for those selected by SSB to serve in their native districts for the first five years of their service so that some succour is provided to people living in remote and far-flung areas which struggle with inadequacies in terms of staffing,” he stated and added that due consideration has been given to the feedback received from the public when the Policy was conceived couple of months ago.

Asking the Public Works Department to take a leaf out of the ADB-aided road projects executed earlier in the State, which made no compromises on quality, the Chief Minister observed that fixing a Defect Liability Period (DLP) of three years on the contractors, will go a long way in improving the quality of roads in the State.

Describing District Development Boards as mini-Legislatures, Mufti Sayeed said the efficacy of such a strong institution has to be revived as was conceptualized by former Chief Minister, Sheikh Mohammad Abdullah, when he gave the broad blueprint of the Single Line Administration

Responding to the demands of the Legislators, the Chief Minister said the Government will explore construction of a Circular Road in the long-term to de-congest Srinagar city and tap heritage and pilgrim tourism potential of Srinagar and Budgam districts.

Some other important decisions – Srinagar & Budgam