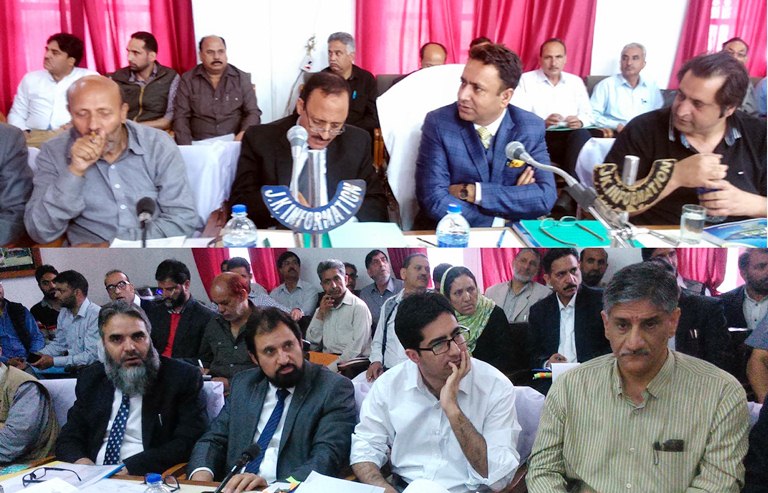 The District Development Board (DDB) Kupwara which met on Tuesday under the chairmanship of Minister for Consumer Affairs and Public Distribution (CAPD) Choudhary Zulfikar Ali gave nod to annual plan of Rs 198.71 crore for the district.

This includes the central share of 149.02 crore, 14.51 crores of state shares, 22.54 crore loan and regular component of 12.63 crore, an official spokesperson said this evening.

Recalling the commitments made by the late Chief Minister Mufti Muhammad Sayeed during the previous Board meetings, the Chairman said we will ensure that all commitments made by Mufti sahib are fulfilled on priority basis, including the developmental works to be done in Kupwara.

Directing the heads of departments to make frequent visits to monitor the work done by their respective departments in the district, the Minister also asked to create valuable assets in border areas.

He directed the officials to work religiously to complete the target for the current fiscal and complete all the under progress projects within stipulated time.

The Minister said that accountability is the key to develop a transparent mechanism, and it is important, that we work hard to restore it.

The Minister also asked the Deputy Commissioner to hold regular meetings to assess the implementation of the developmental and welfare schemes adding that the officers concerned will be made accountable for their work.

Stressing on the judicious use of resources, the Minister impressed upon the officers to put their sincere and dedicated efforts for proper utilization of the funds allocated under various schemes. He also directed HODs   to conduct frequent field visits to monitor the quality and pace of developmental works. He thanked all the public representatives for their support and asked the officers to take into confidence the local representatives while implementing developmental projects.

The Chairman assured that all the suggestions made by the MLAs would be taken care of by provisional heads.

Speaking on this occasion, Minister for Rural Development & Panchayati Raj and Law & Justice, Abdul Haq Khan said instead of spending time in their offices, the district officers should spend more time in field. By this the Minister said that they would come to know the issues people face on the ground.

Assuring the full political support to the government officials, the Minister said that government is with you, and no one would interrupt you to serve the public in true sense.

Earlier, the Minister for Social Welfare, ARI & Trainings and Science & Technology Sajad Gani Lone said that both the politicians as well as government officials have to be on the same page.