Asking policymakers to think out-of-box to address emerging challenges of urbanization in J&K, Chief Minister, Mehbooba Mufti, Wednesday underlined the need for proper planning and management to ensure planned development, basic amenities and a decent urban life to its people.

She said the people are entitled to find in urban settlements a sustainable and economically-viable living environment, which responsibility entirely rests on the shoulders of the state’s urban planners. “H&UDD will have to pull up its socks so that we have better results to show to the people,” she stated.

The Chief Minister made these remarks while reviewing the functioning of the Housing & Urban Development Department (H&UDD), at the Civil Secretariat in Jammu today, an official spokesperson said this evening.

Besides the Draft Master Plans for Jammu and Srinagar, the projects reviewed by the Chief Minister today included Tawi Riverfront Development, Beautification of Maharaja Hari Palace, Multi-tier Parking in Jammu Bus Stand, Housing Colony at Muthi, setting up of IT Park and development of an Amusement Park by J&K Bank under CSR in Jammu city. Similarly, she also obtained up-to-date status of Rakh-e-Arth Colony for Dal Dwellers at Bemina, Sangarmal Complex, parking-cum-commercial complexes at KMD Bus Stand, Old SMG Complex and Sheikh Bagh, besides proposals for housing colonies at Rakh-e-Gund Aksha.

Expressing concern over the present state of urban planning and management, the Chief Minister called for a systemic overhaul and suggested a series of measures to provide efficient infrastructure, solid waste management and building capacities of municipalities so that the minimum service guarantees to the people are provided in a hassle-free manner. She also noted with concern the persistent delay in finalization of Revised Master Plans for Jammu & Srinagar cities, lack of housing policy for EWS (Economically-Weaker Sections) as well removing bottlenecks in extending services notified under Public Services Guarantee Act (PSGA), which include building permissions and issuance of birth and death certificates.

“I also expect people to participate in making our cities and towns neat and clean,” she said, while dwelling one-by-one upon various prestigious ongoing projects in the department. 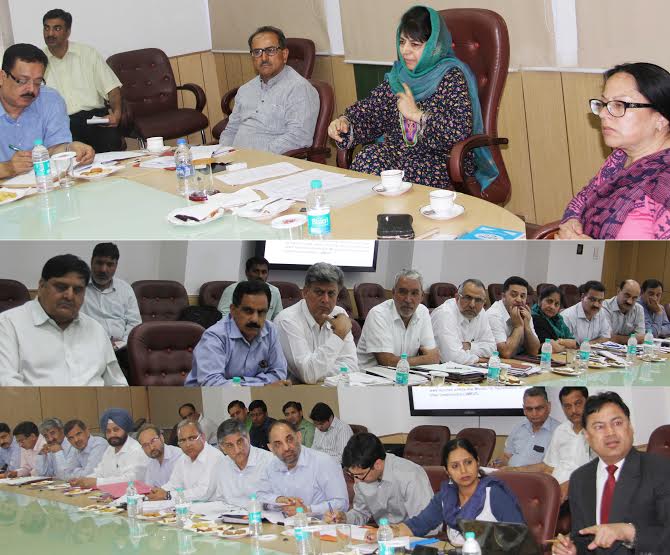 On finalization of revised Master Plans for the two capital cities, the Chief Minister issued directions to engage a team of experts which would examines the Draft Plans and recommends improvements. She also asked the Urban Development Secretary to fix timelines on issuance of notifications so that Master Plans are approved after going through the required mandatory processes.

She was informed by the Commissioner/Secretary H&UDD that while Srinagar has one landfill site at Achan, the winter capital is yet to finalize a similar site for proper garbage disposal. JMC Commissioner, however, told the meeting that a site has been identified at Kot Bhawal for which required departmental procedures, including Environment Impact Assessment and transfer of land are currently in progress.

The Chief Minister was also briefed about the proposal to procure one segregator to be installed at Achan Landfill site at Srinagar, for which she gave Urban Development Secretary a deadline of 45 days to install the same.

Mehbooba Mufti said she will personally monitor the Dal Conservation Plan, development of Rakh-e-Arth Colony and the progress of the solid waste management projects, both in Jammu and Srinagar cities.

In a first step to micro-manage city cleanliness drives, Mehbooba Mufti directed the Urban Development Secretary to introduce an incentive scheme, which assesses the performance of the sweepers in their respective wards over a three-month period and rewards those which are the cleanest. The incentive scheme will be offered to sweepers manning 71 wards of JMC and 74 of SMC respectively.

Stressing upon restoration of urban spaces to its lawful owners, the Chief Minister directed the Municipal Commissioners to launch anti-encroachment drives to free public places so that the city centres are de-congested. She also suggested identification of available spaces where vendors can be collectively accommodated so that they earn their livelihood with dignity, without hindering smooth traffic flow.

The Chief Minister also directed the Municipal Commissioners to interact with various shopkeeper associations so that public spaces are restored to the general public. “Special attention should also be given to creating green spaces by planting trees,” she said, while referring to the barren patches of land at several places in Jammu city.

The Chief Minister also impressed upon the urban planners to create ample recreational avenues for city dwellers for which parks and playgrounds should be developed on priority.

On the issue of funding of several ongoing projects, the Chief Minister was briefed that the Centre has decided that all incomplete projects approved under phased-out JNNURM during the period 2005-2012 in which 50 per cent funds have been released and progressed achieved, shall be funded under the newly-launched Atal Mission for Rejuvenation and Urban Transformation (AMRUT).

Referring to the need to set up affordable housing colonies for urban poor, especially in downtown Srinagar, the Chief Minister highlighted the crisis on the housing front, which she said has far-reaching social implications. “In downtown Srinagar, 2-3 families share a single room. We have to do something quickly to address the social problem,” she said, while directing VCs of both SDA and JDA to conceive infrastructure projects in PPP mode so that these are completed in a time-bound manner.