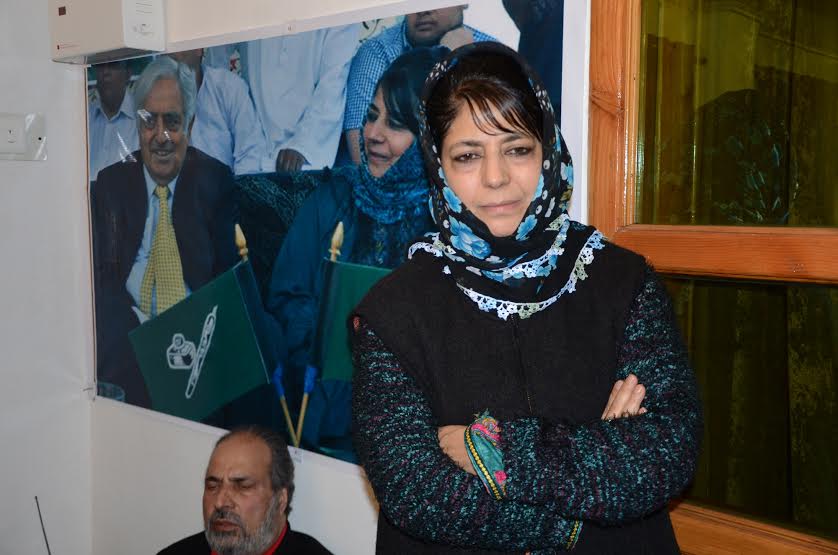 She said there is no dearth of nature destinations in Jammu and once dovetailed with its treasure trove of heritage sites, it will attract a huge footfall of tourists in the coming days.

The Chief Minister said this while addressing a large gathering of people on the banks of river Chenab after inaugurating a Tourist Complex here this afternoon.

Drawing the attention of the people towards her plan to develop Jammu as an independent travel destination, Mehbooba Mufti, who also holds the charge of Tourism Department, assuaged feelings of certain sections, especially businessmen and traders, who think Jammu may lose focus with better connectivity to Katra town.  For this, she said government will strategize and diversify its activities for which a comprehensive plan will be drawn up soon. “An international consultant will soon inspect Mubarak Mandi Heritage Complex and chalk out a strategy so that we restore it to its pristine glory. Similarly, we will remove bottlenecks in Jammu Ropeway Project, which will provide a huge fillip to tourism sector in the winter capital,” she said, adding J&K will have to take a leaf out of Rajasthan in how to conserve our heritage and culture assets.

Walking down memory lane, Mehbooba Mufti said she studied at Jammu but never got an opportunity to visit the place. “On my first visit last week, I was simply riveted by the grandeur and majestic beauty of Mubarak Mandi Heritage Complex. We cannot allow it to be used as a parking place,” she said, adding Tourism and Culture Departments together will identify the potential sites for tourism promotion.

Emphasizing upon infrastructure upgrade, the Chief Minister specifically mentioned Ranjit Sagar Dam in Basoli, Jammu Ropeway at Bahu Fort, Akhnoor Fort, Mughal Sarais in Rajouri, Patnitop, Surinsar, Mansar, Jai in Bhaderwah, Warwan in Kishtwar and Mantalai in Udhampur where all ongoing projects will be fast-tracked. This, she said will position Jammu as an emerging destination for inbound as well travelers from abroad.

Referring to her recent visit to border areas of Suchetgarh and Baba Chamliyal, Mehbooba Mufti said Jammu can emulate Wagah’s success in border tourism. She said she will take up with Centre the issue of starting a march-past on our side which can become a major attraction for tourists. “I hope fresh thaw between India and Pakistan will enable us to promote border tourism on a larger scale,” she added.

On developing Akhnoor as a cultural and heritage centre, the Chief Minister suggested landscaping the scattered patches around the Chenab riverfront by planting exotic flowers so that the place becomes attractive for travelers. She also asked Secretary Tourism to highlight the heritage value of Jia Potha and Ambaran, in Akhnoor, so that art and culture aficionados make a beeline for the place.

“Devise weekend packages so that this place becomes a source of attraction for tourists, including Shiv Khori-bound pilgrims who travel on the stretch in large numbers,” she said, while directing Tourism Department to provide add-on facilities like water-sports for the amusement of the travelers.

In his address, the Deputy Chief Minister credited the vision of former Chief Minister, Mufti Mohammad Sayeed, in promoting Jammu as a major travel destination. He said despite his ill health, Mufti Sahab travelled far and wide to places like Ranjit Sagar Dam, Patnitop, Mubarak Mandi, Jai, Baghliar with the single objective of showcasing Jammu on the tourism map of the state.

Constructed at a cost of Rs.4.34 crore, the Tourist Complex is laced with all modern facilities like suites, banquet hall and restaurants.

Earlier, the Chief Minister went around the complex and saw the facilities that have been created for the visiting tourists.

Jia Potha has heritage significance as it is known as a coronation place for Maharaja Hari Singh. It also has some remnants of Buddhist scriptures, which can be a huge attraction for heritage lovers.

Attractive walkways have also been constructed towards the riverfront so that tourists are provided with recreational facilities.