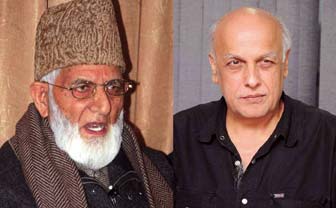 Syed Ali Geelani, now back to his jail at home, has asked Imam’s to learn Islam from Bollywood filmmaker Mahesh Bhatt. An outspoken film personality, Bhatt has made a speech suggesting Indian Muslims do not require anybody’s certificate and if Indian Muslim would become Muslims in the real sense, the destiny of India would change. He has asserted a man who fears cannot be a Muslim. Geelani told a reporter that he was impressed by Bhatt’s speech after some of his activists insisted him to watch it. “I wish our Imams and Khateebs deliver sermons like the speech of Mahesh Bhatt,” Geelani was quoted saying. “If a filmmaker can say such good things about Islam, and inform people about the true message of Islam, about how Muslims are supposed to stand up against oppression and stand up for their brethren who are being oppressed, I don’t know why our own Imams and Khateebs do not give sermons like that.”

Nobody knows why the Mutahida Ulema-ie-Ahli Sunat constituents had to meet but now it is public knowledge that they quarrelled. Actual reasons are unknown but the clerics sounded squabbling over access, use, abuse and misuse of the status they acquire while become Imams and Ulemas. It was Molvi Akhzar Hussain, who leads prayers at Syeed Sahab shrine mosque versus all others led by ‘very famous’ Molvi Hami. While Akhzar was explaining his position over why he was cozy with Akbar Lone and Hakim Yasin, others believe he was playing politics. The fact remains that they are all into politics taking the faith route.

A movement in this PaK arc region facing Keran and Karnah has been hyperactive for last three years. Led by a housewife Sarwar Jan, the objective is to prevent militants from resorting to actions that would invite Indian army retaliation targeting the Neelum population. In August police had to intervene and stop a bus load of these women from approaching an army camp to register their protest. They are active again after soldiers told them, amid increased militant activity, to rebuild the bunkers they lived in till ceasefire happened in 2003. A fire exchange recently forced a spontaneous strike. It was followed by Ban Chhattar residents stoning a rubber boat carrying four infiltrators towards Kupwara and forcing it to return. Locals say they have lost 2000 people since 1990 as 5000 survived injured and can not sacrifice more.

It was discovered in 1942 but the riddle is unsolved still. In the 2-meter deep Roopkund Lake, lot many skeletons are visible in summer. When a team from National Geographic magazine retrieved about 30 skeletons within a year after the discovery, flesh was still attached to some of the skeletons. Another study said the skeletons belonged to 9th century. The latest guess is that it is General Zorawar Singh and his army that perished in 1841 on its way back home from Tibet. This General considered a star of Jammu served Gulab Singh and expended his empire to Ladakh. But in the arid desert, the folklore and the formal history sees him a ruthless tyrant. While research is yet to offer any conclusive evidence about who they are but one thing is clear: they died of a massive hail as all the skeletons have hail injuries on their head.

The ETV Urdu idea came handy to state’s tourism ministry and all of a sudden lot of poets flew to Srinagar’s SKICC. A well attended mushaira, it was after a long time that poetry of some eminent Urdu poets like Waseem Bareilvi, Mansoor Usmani, Rahat Indoori, Munawar Rana, Shakeel Azmi, Manzar Bhopali were heard in Srinagar. Though the government’s cultural and literary arms have been organizing such events, the last major one was in 1994 and later in 2002, but no civilians were seen attending them. Compared to Zubin Mehta show, the mushaira was a huge success.

As local children prefer the private sector, part of the floating population is sending their kids to a state run school in Karan Nagar. And the interesting part of the story is that there are around 60 kids from Guajarat and other states who are taught English, Kashmiri and Hindi. And the experiment in the two room school is a huge success. These kids belong to the parents who seasonally migrate to Kashmir for labour and other menial jobs.

Give him credit for staying relevant and active. Yes, Taj Mohi-ud-Din might be embroiled in controversies but nobody can accuse him of not creating his own space. He did it in every ministry. Nowadays, he has launched a signature campaign to acknowledge the contributions of India’s ‘god of cricket’ Sachin Tendulkar to the sports. Interestingly, the first bat that Tendulkar’s sister gifted to the boy was a Kashmir willow. And the master batsman has revealed it very recently.

CRPF has acquired 600 kanals in Singhpora (Baramulla) as around 1000 kanals are being processed for takeover somewhere near Sonamarg.