Kakapora’s Lelhar is a large hamlet of 400 households. Located on the bank of river Jehlum, recurring flood scare is common. The villagers are mostly into sand extraction. But Abdul Salam Dar, 64, is an exception. Living in a modest home, surrounded by snowcapped paddy-fields, he is a fisherman who is training his son. But his heroics make him bigger.

one unfortunate incident, almost 30 years ago, changed him completely: he witnessed a man drowning while screaming for help. He was part of a crowd and everyone was trying to save a drowning man differently till he drowned.

“His loss of life still haunts me and his screaming for help still reverberates in my ears,” Dar said. “It left an indelible mark on my psyche. Just yesterday when I cast back my mind to that day, tears rolled down my cheek. I learned a lesson.” That day, he resolved that he will try his level best to come to the rescue of the people in such situations.

With time his ability to rescue people or fishing out dead bodies doesn’t seem tough anymore. Neither speedy flow of river nor its depth matter for him now. Once Dar jumps into a river, he doesn’t know where he gets so much strength and energy.

“With the willingness of Allah, I never fail. It feels good to see that I saved a life or helped in fishing out a dead body,” Dar said.

Recalling about an incident in Aharbal, Dar remembers when cops didn’t permit him to search the body of a woman who was feared to have drowned in the river. “One of the policemen while shaking his head in disappointment told me that I was an old man so I can’t do anything,” recalls Dar. But after a minute’s long talk, he convinced the officers with a word, “I will be responsible for my life if I die while doing the job.”

He remembers the cops telling him that they had sent a police party to an expert diver of Kakapora. “I didn’t reveal my identity as I knew they had sent for me only but I told them until the expert person reaches here, I will keep trying.”

Dar admitted the hunt was difficult as it took him a lot of time to zero in on the body because of the depth of the Nallah, which is 80ft.

Dar tied a heavy stone to one end of the rope and threw in the selected area then asked two cops to hold another end of the rope tightly on the bund. The rope led him to the site where the dead body lay upside down. Dar said he has mostly fished out female bodies so far. He has a chilling observation: the female bodies are generally seen with their faces upside down.

So far, in his career, Dar claims he has fished out around 35 dead bodies from different water bodies across Kashmir.

In one case, he fished out dead bodies of two passengers of Shopian from Ramsoo Nallah.

Dar readily decided to help the Shopian family when they called him on phone pleading to find out drowned bodies of their family. “The incident had happened when a moving vehicle had suddenly turned turtle and plunged into a Nallah,” says Dar. He succeeded in taking out the bodies of passengers within an hour.

It is believed that most of the fisherman are expert swimmers and habitual of crossing rivers. But Dar is different.

A God-fearing person, Dar said he avoids fishing out the female bodies during day time for the reason of privacy. “Whenever I hear any news about any female has drowned, I quickly try to rescue her. But I put off the work till evening falls,” he insisted.

Dar is well known in Kakapora. People call him Salam Dungal (diver). Anywhere, when police fail to find out the dead, Dar’s services are requisitioned. Dar shares an interesting anecdote about a newly married lady from his native village. One day while he was bathing in the river, he heard screams of a woman who was crying Fateh Gaye Daryavus (Fatima has drowned in the river). Dar quickly moved across the running water towards the other side of the bank. When he got there, women pleaded him to save Fatima. When he looked on the surface of floating water he saw her curly hair that was visible. He immediately jumped in and took her out of the water.

One remarkable aspect of Dar’s heroism is his ability to operate without any equipment for going deep into the water. He works without gloves, oxygen, and goggles, which are must for a diver’s safety.

Dar has a peculiar style in his operations. “I resort to Humtul, a wooden baton of almost 40 ft length to measure the depth of the river,” Dar said. “I use the same Humtul to locate the body, but, if the depth is greater, then I make the use of a rope.”

He further added that for protection, another person holds the other end of the rope or Humtul tightly that helps him to return safely.

Usually, Dar can remain underwater for around 35 minutes. Searching drowned is a challenge and a very tough job. “In such cases, people have their own opinions,” Dar said. “But, I rely only on the way I know best.

What Dar stands out for is his immense love for humanity. He doesn’t accept any money or compensation from anyone.

Once, he rescued a person from Sheikhpora. Later, the family offered him Rs 6000. “I turned it down, simply because I don’t do it for money; I do it out of humanity,” he said.

Although a reward doesn’t impress him, Dar is perplexed by the selection of a few people by the government for awards. In comparison, they are not even distant closer to what Dar has done in the last four decades.

As Dar is getting old, he is confident that his son will carry the legacy forward competently. He is, however, hoping that if the Government hires his son, it would be good for his family.

During the devastating 2014 floods, Dar did what he does best. He went to save those who were stuck in floods at various places, not only in his native place but away as well.

Dar rescued people from the top floors of local masjids and well-established structures. Not only did he save locals, but he also came to the rescue of outsiders too.Dar states he carried out more than 200 outsider labourers to safer places in three attempts and locals in hundreds. Finally, in dark, he took out his family from his flood-hit house.

All this has not changed Dar. He continues to be fish-catcher and that feeds his family. “We usually capture fishes in the evening between 6-8 pm. We sell them in the morning hours,” he adds

However, his daredevilry is paying him in other ways. Dar being a well-known person, his catch sells quickly as he has a vast clientele. “Whatever we capture, we mostly sell them at our home but sometimes when some fish remain unsold, we sell them at Pulwama market but it happens rarely,” states Dar.

Dar doesn’t see much future for his children in the profession anymore. He actually is desperate to move out of what he is doing.

“I am not satisfied that my family remains dependent on this work forever. I also want to see better days, for that, I request that government for some financial assistance,” he said. 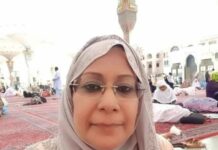 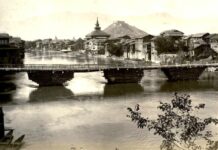