When J&K legislative council chairman Amrit Malohtra constituted a house panel to probe the land grabbing allegations against PHE minister, Taj Mohiuddin, he would have never imagined that the whole matter will culminate on the demand of his ouster. 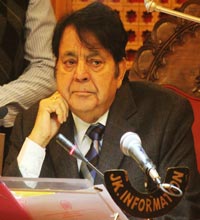 The powerful Taj Mohiuddin is now pressing for a no-confidence motion against Malhotra, a Congressman since 1964. “Malhotra poses danger to the party as well as the Congress-National Conference coalition government,” said Taj, adding that he would request the Congress as well as the ruling ally NC to bring in a no-confidence motion against Malhotra.

Senior Congress leader Amrit Malhotra was nominated as the Chairman of the upper house on Oct 15, 2011, when deputy chairman of the house, Arvinder Singh Mickey, stepped down after completing his term. A law graduate from Delhi University, Malhotra was one of the defense counsels in the famous “Kashmir Conspiracy Case.” Presently he is the senior vice-president of JKPCC and also a member of AICC.

A main votary of decentralization of powers, Malhotra is known for his immense contribution in launching and strengthening of Panchayati Raj Institutions in J&K. Malhotra is a man of literary taste and had been in the company of several veteran Urdu poets. He has been working relentlessly for promotion of Urdu language in the state.

“Dissolution of the house committee is a murder of the constitution. The chairman was under intense pressure and received threats,” Panthers Party MLC, Syed Rafiq Shah said. During the recent autumn session of the council, Shah had produced some documents claiming that Taj Mohiuddin had grabbed forest land in Sedow area of Shopian in connivance with some officials of the revenue department.

National Conference, surprisingly, pulled out its members – Khalid Najib Suharwardy and Bashir Ahmed Veeri – from the five-member committee which pressurized Malhotra to dissolve the committee. “I had constituted the committee in good faith to investigate the allegations and bring facts to light. There was no question of any malafide interest or any personal angle to this issue,” Malhotra said while dissolving the panel.

Anyway, an unprecedented initiative to bring the truth out of allegations of land grabbing against a minister died an “unnatural” death. While those who sabotaged the panel have been professing that Taj was victimized for standing by Omar Abdullah, the minister himself confessed that the land in question was government land under his occupation and he had applied for the regularization of the intrusion under Roshni Act.