Last week, Tariq Ahmad Naikoo, a Kashmiri cab driver, was talk of the town. Reason? He returned a lost bag carrying cash and Jewellery worth Rs. 10 lakh to its rightful owner, a tourist.

On June 21, Tariq had ferried some tourists to Shopian’s Aharbal. Once he reached the tourist spot, he found a bag containing valuables near the waterfall.

Curious, he opened the bag and found mobile phones, cash, golden ornaments and purses in it, approximately 10 lakh rupees. According to Tariq, the mobile phones present inside the bag were costly.

As he switched on one of them, he received a call on the same phone and the person on the other end inquired about the bag.

“I told him that I had found the bag near the waterfall. I could sense the mix of urgency and the nervousness in his voice,” said Tariq. He told the person on the line not to worry and said to him to come to Aharbal and collect the bag.

Almost an hour of wait, the tourists reached the spot and called him again. Tariq met them in the presence of many locals and tourists and handed him the bag.

Tariq’s honesty was endorsed by everyone present there. Since then, Tariq is receiving calls from people who praise him for the act.

“They had lost the hope of getting back the bag but when they received it, they were very happy and jubilant. When I found the bag and saw such valuables in it, I could feel how restless they would have been.” The tourists tried to give some money to Tariq as a gesture of gratitude but he did not accept anything.

Social media was also abuzz with praises for Tariq for his generous act. Travel and tourism players hailed the driver’s honesty saying he had made all the Kashmiris proud.

The Deputy Commissioner Shopian, Owais Ahmad, later called Tariq to his office and felicitated him. He was given a gift and a letter of appreciation by the deputy commissioner. The officer has also assured him of every possible help.

Tariq lives in an old modest house along with his elderly mother, daughter, and wife.

Tariq’s act of honesty has been reported by many major media outlets in India.

Earlier some weeks ago, in a similar case, a Canadian national Oriflorentin had lost his passport, some money (US dollars) and a guitar while travelling in an auto-rickshaw from Nigeen to Nehru-Park via Saida Kada. He made an appeal via social media, and almost in a day, he also got his things back. 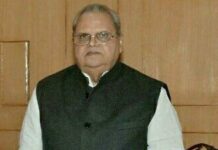