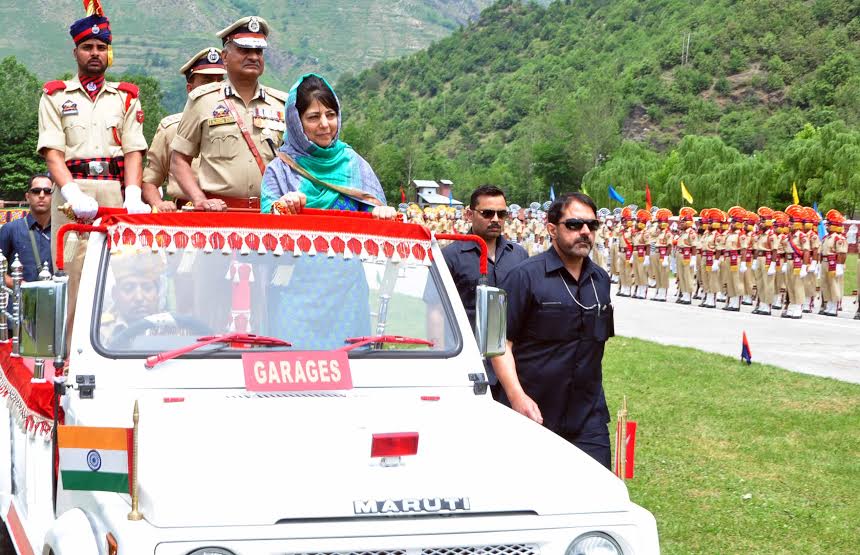 Chief Minister Mehbooba Mufti Monday urged the J&K Police and other security forces operating in the State to calibrate with the “policy of compassion” adopted by Jammu and Kashmir government.

“I want to take Jammu and Kashmir out of the whirlpool of violence that has broken the back of our society and economy, but I will not succeed unless the J&K Police and security forces include themselves in that mission to apply balm on the wounds of the people,” Ms Mufti said.

The Chief Minister was addressing the passing out parade of 13th batch of 228 Constables at Subsidiary Police Training Centre Sheeri, Baramulla, an official spokesperson said this evening.

Highlighting the role of J&K Police in combating militancy, the Chief Minister said the situation in Jammu and Kashmir has improved because of the efforts of multiple security agencies.

“If you had not acted in time, we could have landed in a situation similar to countries like Syria, Iraq and Pakistan which have been ripped apart by acts of violence carried out in the name of religion,” she said.

“Unfortunately, our police force has more responsibilities. The violence of the last three decades has landed you in a difficult situation. You can fight with outsiders but when your own youth pick up guns, it becomes a big challenge for you. You have given many sacrifices. You have stood your ground and I salute you for performing to the best of your abilities,” Ms Mufti added.

The Chief Minister said that the role of J&K Police has evolved given the unprecedented improvement in the security situation of the state. “Your role is difficult because you have to tackle your own people. I can’t tell you how to react when bullets are being fired at you. But during crowd control, we tend to overreact. We have to understand that these boys are our own and it is your responsibility to bring them into mainstream,” she said.

Addressing the Constables who passed out of the training cente on Monday, the Chief Minister asked them to respect the Constitutions of J&K and India while performing their duties.

“The constitution protects the rights of people. Constitution also gives rights to people. Under the constitution, police has more responsibilities than rights. If a small incident takes place, the complaint will come to you as constables. People have high hopes from you. They expect you to undo the wrongs. You should not let them down,” Ms Mufti said. 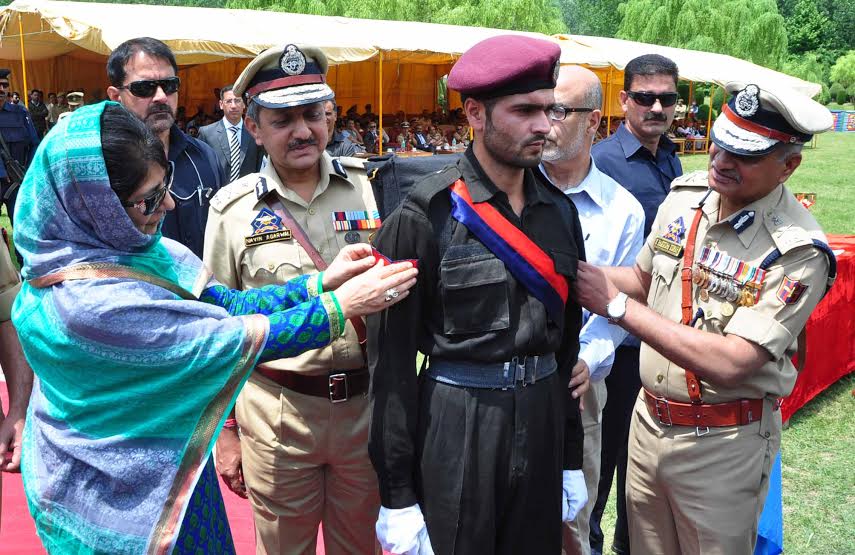 Urging the J&K Police to set up a proper mechanism for engaging with the youth, Ms Mufti said the life of a police officer should become an ideal for people in Jammu and Kashmir where security forces are often portrayed in a negative light.

“Whenever any civilian dies, it undoes the efforts of reconciliation by the state government. The Army is doing an excellent job at the border by stopping infiltration. Police too should show restraint in dealing with law and order situations,” Ms Mufti said.

Recalling her late father, Mufti Mohammad Sayeed, Ms Mufti said the former Chief Minister wished to put a permanent end to the troubles of J&K for which he joined hands with the NDA.

“Despite his falling health, Mufti Sahab stuck his ground and joined hands with NDA. It was a difficult decision for him. He knew that he was running out of time but the welfare of people of J&K mattered to him more than anything else. I am now carrying forward his half-done mission,” she said.

The Chief Minister said the J&K government will evolve a system for quick promotion of constables on the basis of merit, “You will get rewards on the basis of merit and the inequity between KPS and IPS cadres will be taken care of. But you have to make an example of yourself in the society by your proper attitude and humanitarian behaviour,” she said.

The Chief Minister also announced that the state government is working out a one-time settlement of pending cases of SRO-43 within the police force which have been stuck due to legal hassles. “We are thinking of giving one time relaxation to absorb all those children of policemen who laid down their lives in the line of duty,” she said.

Ms Mufti also complimented the J&K Police for running the Drug De-Addiction Centre in Srinagar. “The drug centre has provided relief to many people, but a drug addict is a patient who can be cured. You should go after drug peddlers and book them under PSA so that the menace can be ended,” she said.

The Chief Minister also distributed commendation prizes and mementos among the pass-outs.

Earlier in his speech, DGP K Rajendra congratulated the pass-outs while thanking the CM for attending the event as the ‘Chief Guest’. He said the J&K Police provides training to its recruits in accordance with changing situations, cybercrime, disaster management, militancy and other fields.

“Our forces have laid down their lives for the safety and security of people. They have upheld the highest standard of professionalism while serving the people dispassionately and with honesty. For our jawans, the welfare of people is the top priority,” Rajendra said.