After BJP lost a seat in Ladakh Council in the by-elections, Leh leaders announced that they will be intensifying their agitation for statehood and constitutional safeguards. “The Home Ministry has not set up even the Committee for talks with us,” Chering Dorjay, an influential politician of the region regretted. Leh and Kargil Democratic Alliance have joined hands for the common good. Apart from statehood and constitutional guarantees, they are seeking two berths in Lok Sabha and one in Rajya Sabha.

In the 3-day Jammu and Kashmir Powerlifting and Deadlift Championship, Kashmir participants took home 28 medals, including 16 gold, 6 silver and 6 bronze medals in male and female categories. However, the surprise was Humaira, a 21-year-old student from a Handawar School who won two gold medals by lifting the heaviest in the competition. A resident of IIT Colony Handwara, Humaira has already won three times the competition in North Kashmir and emerged as the runner-up in the 2021 Kashmir Powerlifting Championship. Almost a year ago, when she weighed 70 kgs, she decided to join gym. It was there, she started powerlifting.

A 2022 survey of 258 springs found that 87 per cent of them have excellent to good water quality and can be used for drinking without any treatment.

Just one high-end marriage has literally pushed Kashmir’s hospitality sector in a rush. A Canada-based realtor Rajvir Kaur fell for Kashmiri engineer Jaspreet Singh in Srinagar 2021. They met in a Punjabi calligraphy camp that Kaur funded. They married in Pahalgam on Monday and 170 guests flew to attend the wedding. Officials, however, said there were many more such marriages that took place in Kashmir this summer. Some are scheduled in Srinagar’s twin hotels located in the Zabarwan range.

The administration has sanctioned a project worth Rs 77.25 lakh to restore Ghoda Gali, which houses stone horses believed to be sculpted thousands of years ago, in Gool village of Ramban. 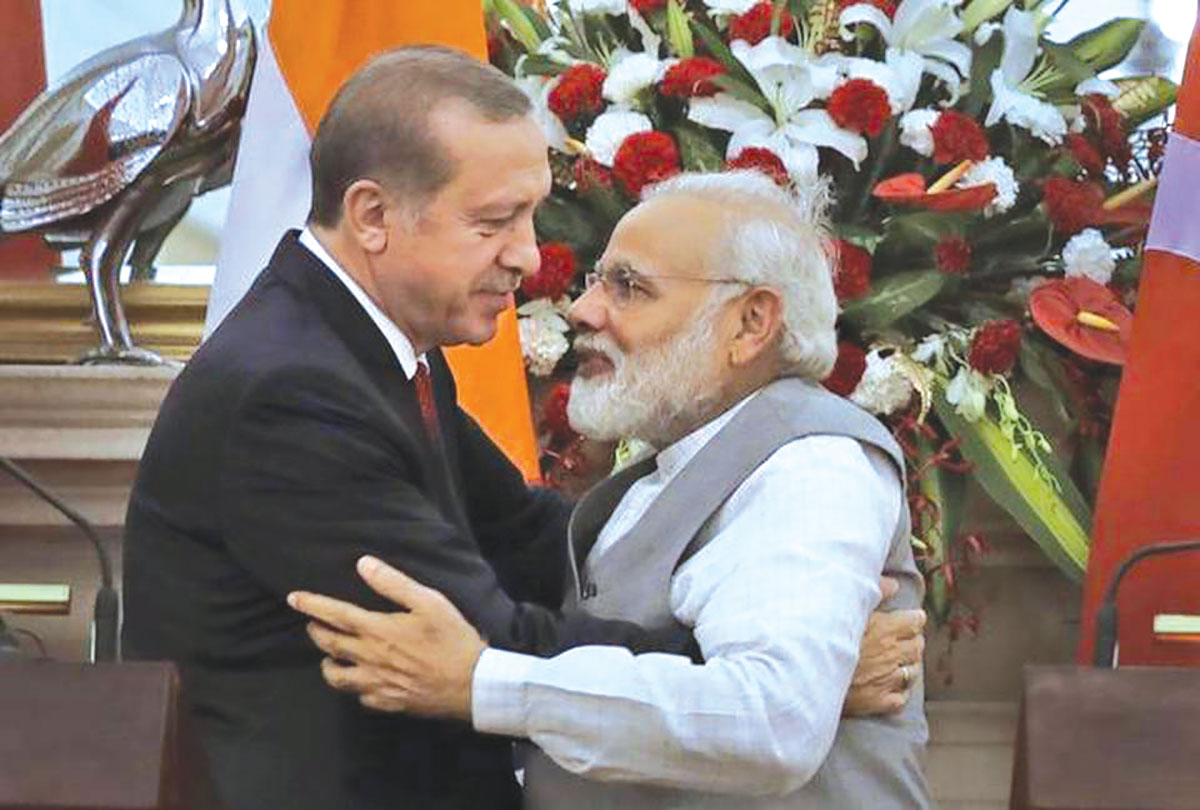 In wake of August 5, 2019, the relations between Turkey and India hit the bottom. Three years later, they are repairing the relationship. At the Shanghai Cooperation Organisation (SCO) Summit in the Uzbek city of Samarkand, Prime Minister Narendra Modi had an unscheduled meeting with his Turkish counterpart, Recep Tayyip Erdogan. No details about the meeting were shared, however.  A few days later, Erdogan spoke to UNGA and mentioned Kashmir. “India and Pakistan, after having established their sovereignty and independence 75 years ago, they still haven’t established peace and solidarity between one another. This is much unfortunate,” he said. “We hope and pray that a fair and permanent peace and prosperity will be established in Kashmir.”

The commentary in Delhi media was that though he raked up Kashmir again but the statement was neutral and lacked the intensity of 2019. But the foreign office reacted strongly. “I don’t think reference to Jammu and Kashmir at the UNGA is useful or helpful,” MEA spokesman Arindam Bagchi told reporters. “As regards Jammu and Kashmir, our position is very clear. This issue needs to be resolved in the Shimla Agreement and bilaterally and also in a conducive atmosphere free of terrorism. I don’t think the reference to Kashmir in UNGA is useful or helpful.”

More than 4000 employees, mostly Kashmiri Pandits, on strike for more than 133 days will have their salaries stopped now.

Kashmir’s largest freshwater lake is Wullar and it is very dangerous when the winds speed up. That was the key reason, why the people living on its banks were normally using bigger boats to stay near the banks, even for fishing. However, two brothers from Zurimanz village have introduced Shikara rides for tourists. The Shikara boats existed in the area but mostly for weed collection, fishing and water nut harvesting. This is for the first time that one can have a Shikara ride in the lake, courtesy Firdous Ahmad Bhat, 42, and Ghulam Hassan, 40, who basically fishermen.

The government terminated the six doctors for unauthorised protracted absence. Eleven others have been asked to report back with an undertaking to serve Jammu and Kashmir for at least 5 years.

Last week, the Jammu and Kashmir Police strongly reacted to a series of tweets by Hyderabad’s vocal politician, Asaduddin Owaisi. The day Lt Governor, Manoj Sinha threw open a theatre in Srinagar, Owaisi tweeted: “Sir Manoj Sinha, you have opened cinema halls in Shopian and Pulwama, but why is Srinagar Jamia Masjid shut every Friday, at least don’t shut it during the afternoon matinee show.”

JKP countered the tweet. “Jamia is fully opened. Only on 3 occasions post-covid, it was temporarily shut for Friday noon prayers owing to inputs of terror attack and law and order situation. This was after Jamia authorities failed to take responsibility for happenings inside. Staying far is no excuse for ignorance.” The politician was asked to “behave responsibly” and “resist from making false statements”. In reaction, he uploaded a lot of data in favour of his claims. The controversy ended with the last laugh by none other than the Jamia Wakf, which said the grand mosque of Kashmir was closed on 14 Fridays in 2022 alone.

While everybody knows the crime graph in Jammu and Kashmir is going up, the heinous crimes are also getting a shocking upsurge. In Budgam, a teenager was arrested for sodomising a 4-year-old. In Pulwama, police are investigating a case involving a father in violating his own teenage daughters. In a Tangmarg village, the police have already arrested a cleric who impregnated a young girl and then got her aborted the foetus and used local boys in its burial by offering a shaming excuse. The vigilant boys broke open the grave and exposed the criminal, now cooling his heels in the lock-up.

An erstwhile Burn Hall student, Showkat Wani saw the hard copy of a certificate and a photograph at Baba Deb – the home to Kashmir’s major scrap buyers – in which a non-Muslim girl receives honours from erstwhile Prime Minister, Mrs Indira Gandhi. He posted the photograph on his Facebook wall, with this message: “could feel the pain of migration from the roots @Kashmiri Pandits student of Mallinson Girls School Srinagar found this photograph and her certificate with the scrap seller at Babdem, any information so that I can handover it to her by post, perhaps her mother’s remarks are written on this photograph in Hindi or Sanskrit.” Kashmir Life picked the post and it led to the revelation of a lot of information about the young lady. She was identified as Renuka Choudhary, one of the “genius” daughters of Prof K L Choudhary, who now lives in the USA. It was not known if Wani has been able to get in touch with her.

A Kashmiri cardiologist, Dr Owais Wani attempted suicide and put it on social media in protest against the alleged harassment by his head of the department. The video showed graphic details of a crying doctor saying that the documents of two candidates were to be signed by the professor. While that of Rajasthan has been signed, Wani’s was over delayed by ten days. The government sought a report from the GMC, Jammu Principal. “A report regarding the video which has surfaced in social media alleging harassment of a doctor in GMC Jammu has been sought from Principal GMC Jammu by Secretary, Health and Medical Education Department,” a brief tweet by the Health & Medical Education Department J&K. It was immediately known if the report has come and what the follow up has been. 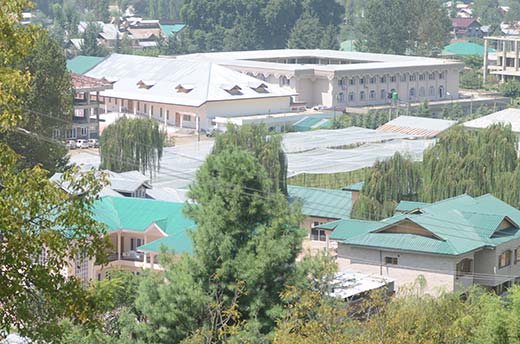 Premier agriculture university, the SKUAST-K has opened doors for foreign students. It is planning a visit by ambassadors of foreign countries stationed in Delhi to showcase their capacity and worth. A university brochure suggested that it will admit foreign students for graduate, post-graduate and doctoral courses twice a year for the autumn and the spring sessions. The brochure details the shift in the situation under the BJP rule and after the downgrading of Article 370 in 2019. “We are planning to invite ambassadors of foreign countries to Kashmir soon for an education fair,” Dr Nazir A Gani, the VC was quoted as saying. “We will also involve the Indian consulates present across the globe to promote the admission scheme overseas.” University’s focus is on Central Asia, the Middle East and Eastern Europe.

In two separate incidents across Kashmir and Jammu, sons died with one of the parents. Mother Sakeena Begum and her son Imtiaz Ahmad were killed in Mahore (Reasi) when their vehicle skidded off the road and fell into a gorge. In Mather Pather Behak Daksum (Kokernag) a log house in the meadow where they were living collapsed killing the father and his son.

In the sensational murder of a newlywed couple in Behibagh (Kulgam) in June 2009, Principal Sessions Judge, Tahir Khurshid Raina sent two of the three convicts to life imprisonment till their “last breath”. The third convict died in jail during the trial of the case. Though the prosecution had established the involvement of the convicts already, the clinching evidence came from their son, Yawar, who was less than three years old when his parents were killed before his eyes. His statement was taken on record only in 2017. The murders took place during the intervening night of June 29 and 30, 2009. “Let them incarcerate in the jail till their last breath”, the court judgment reads. “Let them not die with a single death for causing the barbaric death of the young couple, leaving behind their three years old child but have a continuous deep penitence of their cruel crime committed,  coupled with a continuous feel of its consequences”. The details of the case are gory. Four friends started gambling at the house of the victim, Shiraz Ahmad Shah. Three others were Mohammad Ismail Shah, Bilal Ahmad Shah (brother of the victim), and Mohammad Ishaq Shah. “Shiraz lost Rs 10,000 while gambling and had the urge to play more and approached his wife, Jameela, the mother of his three-year-old son, Yawar,” Arshad Baba, the lawyer said. “She refused to offer any money. This infuriated the entire gang and they jointly killed Jameela. In order not to leave a witness behind, the trio later killed Shiraz as well.”

Researchers at Jamia Millia’s Multidisciplinary Centre for Advanced Research and Studies (MCARS) led by prominent Kashmir genetic scientist, Dr Tanveer Ahmad, developed genetically engineered stem cells for the treatment of infectious and inflammatory diseases. Their research has shown that stem cell-based therapies can alleviate inflammatory conditions during infectious diseases like Covid19. The study first elucidated the cause of cellular damage caused by SARS-CoV-2 and its proteins in lung cells and then designed an innovative approach to create engineered stem cells. The laboratory, one of the best in India, has named these cells IMAT-MSCs (intercellular mitochondrial transfer-assisted therapeutic mesenchymal stem cells).