At a time when Srinagar is India’s dog-bite capital, a former bus driver collects throw-away from butchers and chicken dressers and feeds many packs a day, reports Saima Bashir 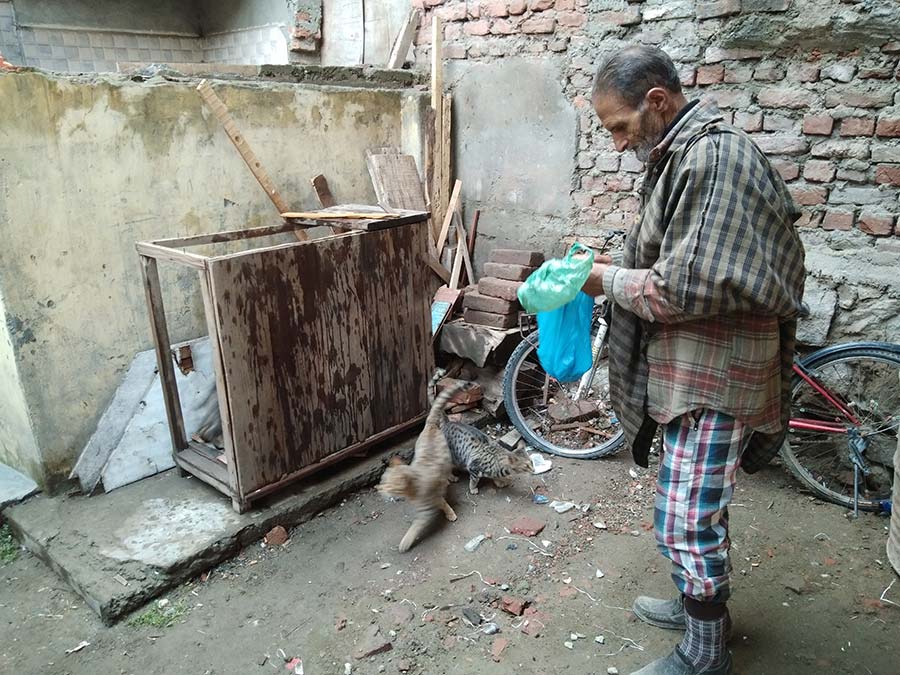 In Srinagar’s Barbarshah, a sexagenarian exhibits himself differently. Weaning a worn-out Pheran, the famed long loose cloak that is Kashmir’s winter essential, he is often seen walking with half a dozen plastic bags. Usually, he is not alone. Almost a pack of 20 to 25 dogs follow him passionately.

After walking some distance, he stops at the bund of Tchunt Koul and flashes a smile. Then he shouts Kalia and the dogs following up the line-up. It surprises people mistaking the stray dogs as trained pets.

With the dogs queued up, the man opens his bag. It is filled with chicken limbs and other organs of the chicken that retailers usually throw in dustbins. He feeds every one of the pack and they exhibit a discipline.

One of the rogue dogs, after having his own share, attempts to take away the share of the other one. The old man scolds him and warns him not to repeat the mistake. It is sort of an order usually parents deliver to their kids. Surprisingly, the dog listens to him, throws back the other’s share. With their share in their bellies, they disperse.

Manzoor has lost his parents in his early childhood and it has led him to become a school drop-out. “I started working as a bus conductor at an early age, and with the passage of time I learnt driving,” Bhat said. “I worked as a bus driver for about 25 years,”

It was the bus yard where Manzoor fell in love with the dogs.  An animal lover, he would feel pain if somebody will pelt a stone on a dog.

He used to take food from his home for the dogs in the bus yard.

At times, Manzoor said, other people in the yard would get angry for feeding the stray dogs. “They often accuse me of creating a menace but they never knew that these dogs during nights would take over as yard’s security guards,” Manzoor said.

Once, Manzoor remembers, a mad dog, who had come from some other locality, entered into a yard shop early in the morning. “The shopkeeper claimed that the dog was one of the pack that I feed and forced me to get him out of his shop,” Manzoor said. “I refused but he gave me two options: either to get the mad dog out or he would kill the entire pack in the yard. I had no choice but to get him out even though he bit me. This I did for the pack around.”

Manzoor has given up driving. It was a compulsion. His eyes developed a problem for which he had to undergo a surgery. Then, he started selling cigarettes in the same yard.

Now the dogs literally keep his cigarettes kiosk almost surrounded. Though his income is down, he still feeds them.

Manzoor closes his stall for two hours from 11 am, goes to Dalgate, Koker Bazar and, sometimes to Batamaloo to get food for them. He collects chicken claws from all these places. “From Batamaloo, I use to get the throw-away material from butchers and then I collect the bones from the Kale Maaz (head meat) sellers,” Manzoor said.

Manzoor has his own philosophy. “Like cows and goats, dogs also deserve to be treated well,” Manzoor said.  “They are more faithful than the rest of the species.”

But sustaining this passion has cost Manzoor a lot. His relatives are unhappy with him. Even at his home, the family has kept his utensils separate from the rest. “I am not allowed to eat in the kitchen,” he admitted. “Even the locality has started creating stories about my passion.”

Manzoor has fixed four feeding spots for the stray dogs. “I take special care of the lactating bitches and I give them extra food,” Manzoor said.

Besides, he takes care of the injured dogs, as well. He moves injured pariah’s to the veterinary hospital and get him treated. In certain cases, some surgeries were also carried out.

Once a car hit a dog, and Manzoor was the dog’s attendant for two months. He washed his eyes that had a lot of sand in it and later the dog underwent a surgery. From his earning, he would get the medicine for the injured dog.

During 2014 floods, Nisar Ahmad, Manzoor’s elder brother said, he stayed back at home and was first to move out and seek food for the dogs as water started receding.

“I am a poor man and can’t afford to give any charity so I have found the alternative in doing this,” Manzoor said.

“Human greatness is best judged by the way we treat animals.”

But Manzoor feels bad when he lacks resource for his operations. “I avoid coming out of the home but when I come out, I try to hide my face,” Manzoor said. “But these dogs still smell me out and follow me.”