Comic content creator Musaib Bhat’s latest peppy number exposes the claims that people and the system make within and about the City of Kashmir, the Shehr-e-Khas, writes Khalid Bashir Gura

Comedy contours in Kashmir are changing. In order to find respite and escape from life’s routine tensions, people are now finding refuge in YouTube as it offers them a lot of entertainment and reasons to smile and even laugh. Watching the trend, a number of youngsters are creating comic content that finds instant acceptance from the Kashmiri-speaking audience.

Musaib Bashir Bhat is one of the digital comic content creators whose new release on Eid was an instant hit. It notched 200 thousand views within the first 48 hours on the video-sharing and social media platform.

The new peppy number, Shehr-e-Khas is laced with satirical tone and antics to appease audiences’ taste. This number also is themed around and within the Shehr-e-Kashmir, the old Srinagar city. Unlike the previous ode number, this new release satirizes the characteristics of the inhabitants of the old city.

Besides underscoring some universal flaws devouring humanity, the song highlights the dark underbelly of society. Yet again, it relies on his interesting characters, dialogues, punch liners and eccentric antics to keep audiences hooked. Much like in the past, it is the message embedded in the song, which seems to resonate with audiences.

The 4.25-minute video begins with a news broadcaster’s rib-tickling scene, which soon shifts to a drone shot of the old city and its alleys. The central character, Musaib features near the accused boondoggle Shehr-e-Khas, lately considered the threshold of the old city. The song soon introduces other characters donning red suits and especially Ashaal, the dangerous man as Musaib puts him, whose looks and role again infuse life into Bhat’s song. The presence of other supporting characters who remain silent throughout helps in breaking the monotony.

From the gate, the camera soon shifts to other rare picturesque locations of the old city and narrowcasts his funny shots to characters like Ashaal displaying his teeth and horse neighing simultaneously. The language of the camera and script has translated local humorous language and thought into mocking the audience hooker. His large teeth have been compared with horses just to cater to the audience’s standards and demands.

The song is embedded with messages ingrained from observations and experiences. It has used Kashmiri proverbs to convey the historical and present situation of the land and its people. The message he peddles is that catcalling and mocking is the characteristic of its inhabitants. It, however, drifts to other themes like romantic relationships and the emotional roller coaster ride and demands it entails. It also focuses on some social and civic issues plaguing society. It also highlights the essence of the once-bustling market of Maharaj Bazar.

As the Covid-19 pandemic gripped the globe for more than two years and continuously mutate and threatens to come back; Bhat considers it a conspiracy.  The song soon shifts to other themes like showing off in society and growing materialism. Besides, the lyrics which are captivating, the director has used male characters in content to make the audience laugh.

It reduces the definition of people living in the city and the welfare measures of the system as mere hollow claims. Yeha Sourouye Faund Choui, (this all is a fraud) is the main theme of the number. The song conveys that whatever is being claimed by either side is unreal and make-believe. It is as good about the claim that Maharaj Gunbj is a major market as it is about the claims that Beh Chous Kalleah (I am the big shot). The number ridicules them all.

From Aes Gai Badal which became popular in Kashmir to now, Qayamat Kalleah is finding its way into local lingo. According to Musaib, the song defines the present situation.

“Whatever I do becomes trend but I consider it an illusion,” Musaib said. “I have used Kashmiri proverb to mock elite strata of the society living in posh colonies as they like rough and tough features of boys in downtown.” As he traverses through the romantic contours, he explains the present generation’s modus operandi of loving and love bird’s features.

Besides underscoring these debauching features of any society, Musaib focuses on some serious issues like dog bites, snake bites and ghosts at night on the streets. “I wanted to convey that these are growing issues like dog bites and I leave ghosts at night on streets to audience interpretation. One also does not want to confront the police. And should seek refuge from attaining wealth through corruption,” he said.

Maharaj Gunj in the old city was the busiest market and still has a wide variety to offer, however, as the city is sprawling, it is losing its sheen. People despite having limited means and sources of income flaunt wealth and are becoming more materialistic, he said as people’s moral and spiritual retrogression is displayed when even the charity is used to show off.

As Musaib’s peddles embedded messages, his songs also carry one-liner, which become trending across Kashmir. His song mocks some elite scions, chameleon politicians who take oaths frequently are a bucket of visible biases. 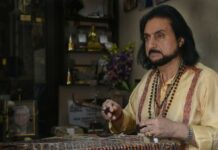 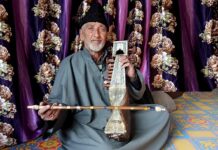 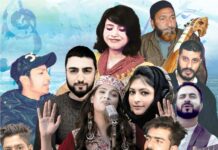 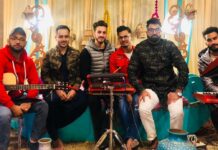