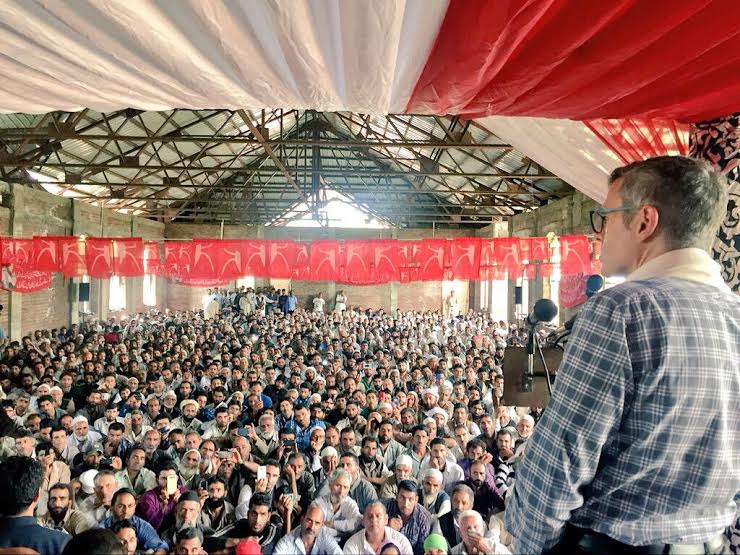 National Conference Working President and former CM Omar on Wednesday said that despite a lot of hugs and political embraces, PDP Patron Mufti Mohammad Sayeed and PDP President Mehbooba Mufti could not do anything for J&K and that the PDP-BJP Alliance was proving to be a nightmare for the State. “For all of their hugs with BJP leaders, the end result for the common-man has been zero. The only noticeable results of the PDP-BJP Alliance have been the humiliation of the people, the denigration of the State’s special status and the reneging of one promise after another by PDP. There is absolutely no sign of basic governance leave alone development anywhere in the State. The hard earned atmosphere of peace and stability has been disrupted as well while the State Government seems completely clueless,” NC Working President Omar Abdullah said while launching the party’s Membership Drive in Kulgam and Islamabad Districts in South Kashmir.

“Mufti Sahab and his party have sold its conscience for the petty trappings of power. Despite all his U-turns and his sell-outs on demands like AFSPA revocation, safeguarding Article 370, return of power projects and dialogue with separatists – Mufti Sahab still failed to get BJP to respect his chair. We all remember how the Chief Minister’s orders were summarily overturned by his Health Minister at the G B Pant Hospital. However, Mufti Sahab lacks the courage to object to such humiliation and has denigrated the CM’s chair to remain in power. For all practical purposes it is evident now that Nirmal Singh is the Chief Minister for Jammu and Mufti Sayeed is the Chief Minister for only some parts of Kashmir – if at all,” Omar Abdullah said.

The NC Working President said the “alarming spurt” in local youth joining militant ranks was a direct consequence of the “youth feeling betrayed due to the opportunistic alliance between PDP and BJP”. “The same PDP that sought votes to keep BJP out of the State ended up embracing the BJP. The youth have been stunned because of the stark contrast between the pre-poll rhetoric of PDP and what the party ended up doing post elections. Due to this disillusionment and disenchantment, a significant number of local youth are choosing the path of militancy and that is extremely worrisome.  A political betrayal of this scale and with such brazenness is the last thing our youth deserved,” the NC Working President said.

“One can’t help but wonder what happened to PDP’s Self-Rule vision document? What happened to the hoardings promising people dual-currency, open borders and telling us the distance to Muzaffarabad? PDP must perhaps be the first political party that threw its own vision document into the dustbin – and with such spectacular effortlessness. Today, PDP is demanding that New Delhi emulate the Naga Peace Process in J&K. Is the Kashmir Issue as simple as the problem in Nagaland? If it were so – why did the same party talk about dual-currency and open borders till now? This is yet another blatant attempt by the PDP to trivialize the sentiments of the people of Jammu and Kashmir,” Omar Abdullah added.

The NC Working President lashed out at the PDP-BJP Government of Mufti Sayeed for breaking all its promises and proving to be an authoritarian, intolerant regime that had demonstrated clear, unambiguous anti-youth tendencies. “In this PDP-BJP Government, tear-gas shells are lobbed inside Jamia Masjids in Srinagar and Islamabad. When mosques and mosque-goers are attacked and when the Chief Minister maintains a sadistic silence over such incidents – one can only rue the state of impunity and repression. I wonder where Mehbooba Mufti is today. Newspapers are reporting her missing and trying to speculate about her whereabouts. The same Mehbooba Mufti who gave moral sermons and shed crocodile tears for political gains is now silenced by the sweet poison of power. What a shame! Where are the Members of Parliament from PDP? Other than issuing contradicting statements – some against their own party, what have they done for the State since they were elected? There is an atmosphere of irresponsibility and arrogance – as if this PDP-BJP alliance is actually punishing and persecuting the people of this State for some long harbored vengeance against them,” he further said.

Condemning the PDP-BJP Alliance’s open fanning of communal tension in the State, Omar Abdullah said National Conference was a party for all regions and religions of the State and would never allow PDP or BJP to divide the people for their own political dividends. “Today officers are being transferred and posted – not according to their merit or seniority but according to their religion. This has become the unofficial policy of the State Government. Such tendencies are of grave danger to the State. This is a State that has a glorious history of secularism and unity and any efforts to sow seeds of discord have to be opposed tooth and nail.”

Wage War On Drugs, Focus On Rehabilitation Of Victims: CS To Officers