The 6th Convocation of the Mata Vaishno Devi University (SMVDU) was held at its Auditorium on Wednesday. The President of India, Ram Nath Kovind, who was the Chief Guest, delivered the Convocation Address. 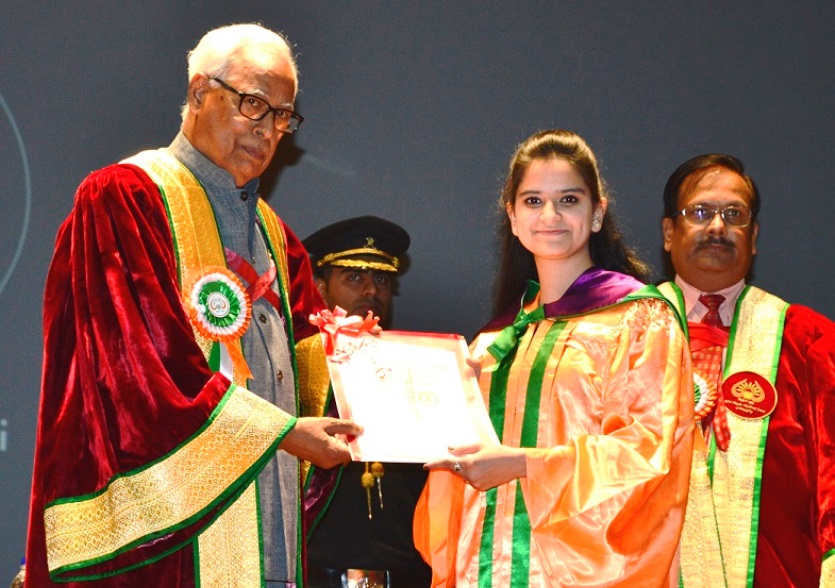 Governor N.N. Vohra, who is Chancellor of the University, presided over the Convocation while Chief Minister Mehbooba Mufti was the Guest of Honour on the occasion.

The spokesman said in a statement that Governor awarded 882 degrees, including PhDs, Masters and Bachelors degrees, and presented 9 Silver Medals to meritorious students. The President gave away 10 Gold Medals.

Governor congratulated all those who received degrees, medals, and awards at the Convocation and wished them high success in their future careers.

In his address, Governor welcomed President Ram Nath Kovind and First Lady and said that it was a proud moment for the University that the President was among them to address the Convocation.

Recalling the objectives of the establishment of the Shri Mata Vaishno Devi University, Governor observed that the University, set up and fully funded by Shri Mata Vaishno Devi Shrine Board, shall be fourteen years old in August this year. He said that this fully residential University provides learning programmes and research opportunities in Science, Technology, Architecture, Management, Social Sciences and the Humanities at the Graduate, Post-graduate and Doctoral levels and presently they have 1675 students of whom about 25% are from 23 States of the country, about 46% of the total number of students are girls and nearly 3600 students had passed out since the establishment of this University.

Governor observed that this University lays high emphasis on merit at the time of admitting students to the various academic programmes and, post admission, planned efforts are made to encourage and reward performance. Merit-cum-Means Scholarships are provided to students at all levels and Assistantships are awarded for the pursuit of higher studies. During the past year, they have provided support valuing Rs. 176 lakh to the meritorious students.

Governor observed that when this University commenced functioning it faced varied challenges among which perhaps the foremost related to their Campus being not well connected with the Jammu Highway. He said that it is gratifying that in the past several years it has been possible to construct several roads and bridges which connect this Campus with the Pathankot-Jammu-Srinagar Highway and with the Katra Railway Station which has virtually reduced the journey time from Jammu to half of what it was earlier. The University is now able to attract nationally renowned teachers and eminent researchers who fly to Jammu, lecture at the Campus and return the same day if they so wish.

Governor said that it was a matter for considerable satisfaction that though still in its infancy this University has been ranked among the top 100 Engineering Institutions in the country and finds its place within the top 150 Universities of the country as per the recently concluded NIRF 2018.

Governor observed that the University, set up essentially as a Science and Technology institution, has been striving to establish close connectivity with centers of excellence and with the leading industrial and business enterprises in the country.  Governor noted that as a step in this direction, two outstanding entrepreneurs of India had been honored by the University today, both of whom are steering enterprises which are known the world over.

He said that the exceptional achievements of both these leaders of industry are a source of inspiration for all those who are involved in the industry, business and management areas in our country and he looked forward to Mittal and Munjal periodically visiting this Campus to interact with faculty and students and to advise the University regarding the pattern on which Technology and Business learning programmes should be developed for effectively meeting the emerging challenges.

Governor said that for the passing out students the Convocation marks the culmination of their hard work when, with degrees in their hands, they cross the portals of the University to seek employment or pursue higher studies. He congratulated the students who had received degrees, medals, and awards wished them very bright careers ahead and said that he expected all the passing out students to maintain high ethical and moral standards in their personal lives as well as in the course of all their future professional engagements, wherever they chose to work.

Governor thanked Prof K.L. Chopra, former Director of IIT Kharagpur and Shri R.P. Agrawal, former Education Secretary of India, members of the Executive Council, for their continuing support and advice in regard to all matters relating to the management of this institution. He also thanked Prof D.P. Agrawal who recently steered an Academic Audit of this University. He complimented Prof Sanjeev Jain, Vice Chancellor, Deans, Faculty and the staff, for their sustained devotion to taking the University forward on all fronts.

Earlier, Prof. Sanjeev Jain, Vice Chancellor, SMVDU, presented the Vice Chancellor’s Report, highlighting the past achievements and future action plans. He gave details of the campus placements, publications brought out by the University, research projects being undertaken and the various workshops and conferences organized by this institution. He said that various initiatives are being taken to build this institution as a Centre of Excellence.