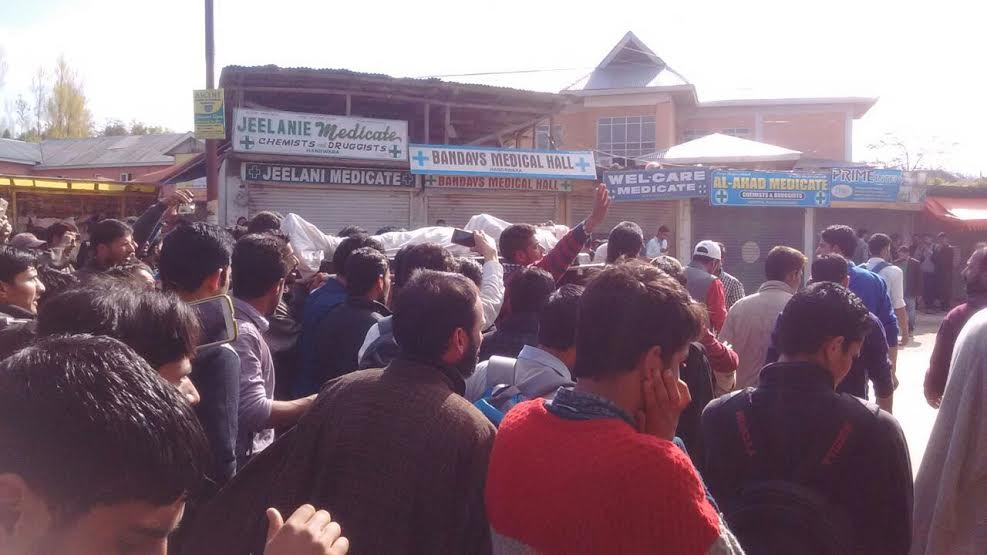 The charged mobs protesting the “molestation” and the subsequent twin murders by the security set up have finally damaged the imposing bunker that dominated the town’s main square. The last reports said a conflagration was seen on the spot.

Handwara town erupted into protest after youth found a woman – or two, as per another report – was seen being followed by a soldier to a bathroom. The youth reacted and barged into the bunker. “They dragged out the soldier from the bathroom and that lit the fires,” a resident who witnessed the happenings said on the condition that he may not be identified. “Then hundreds of people assembled.” 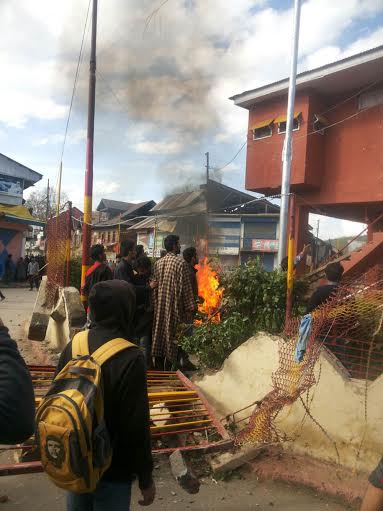 Within minutes, hundreds of cops and soldiers were on the scene. When the mobs resorted to stone pelting attacking the bunker, a series of bullets were fired. Videos available on line suggest cops coming in a vehicle, de-boarding it and resorted to firing. They would move around while firing towards the mob shouting ‘go back’ slogans against the army. It was not immediately known if they were firing tear smoke shells or the bullets.

Most of the witnesses said that the soldiers decamped from the bunker within minutes after the attack. However, it might require detailed investigations.

A police officer from north Kashmir said the video that has gone viral on the social websites was shot after the killings and not before it. “No cop is involved in the inklings,” he said.

A senior civil administration officer told radio that he was on spot with the local SP. “No cop fired a bullet,” Bashir Ahmad, Tehsildar Handwara said. “We were later told that a body was recovered from near the hospital and I believe he might have been hit by the bullets fired by the army.”

After the twin killings were reported it added to the crisis in the town. Then a huge mob was out that demolished the bunker.

The bunker, residents said was actually a transit bunkers since 1990 which became a permanent fixture in 2004. “It was not a bunker, it was a control room sort of a thing that was fitted with electronic surveillance set up,” one informed resident said.

“This was vital for soldiers to manage the passage of convoy.” However, the resident said this bunker lost its importance after the bypass became operational. It reduced number of soldiers deployed in it but was an outpost sort of thing. The bunker was demolished and a fire was seen on the same sight later on Tuesday.

The town, however, is still angry and on streets. Though the police have taken over the control around the main chowk, it is still is unable to manage the restive town.

Apart from twin deaths, there are three more people being treated upon in the local hospital. Offering details Dr Abdul Rouf said, MS Sub-district hospital Handwara, said, “Of the two dead Nayeem had a bullet in his abdomen and Iqbal was hit in his head.” Interestingly of the three injured, two are from Ganai Mohalla, the locality wherefrom the “girl” belonged to.

“We have three persons admitted in the hospital,” Dr Rouf said. “Two of them have bullet injuries and third one has an injury which is not a bullet but in all the three cases, the injuries are minor.”

Nayeem was resident of Handwara town while Iqbal belonged to Bomhama area.

A police officer in Srinagar said they are not in a position to offer any detail. “The town is witnessing massive stone pelting,” the officer said. “All our men are out and once they are in a position to talk, we will be able to brief you.”

Meanwhile, regretting the killings, army has said, “those found guilty will be dealt as per the law.”