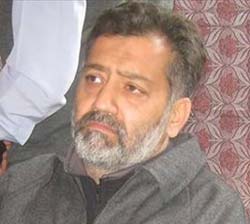 When Devender Singh Rana of opposition party, the National Conference, was cornering the PDP-BJP government on the issue of GST in assembly in a recently concluded session held specially to debate the issue of extension of GST law, PDP’s Imran Raza Ansari told Rana “I will lynch you here”.

The remarks created uproar in the house and the nature and timing of remarks, which is significant, prompted the Chief Minister Mehbooba Mufti to break her siesta of silence and apologize for the remarks. She said she was “taken aback” by use of such words by a lawmaker. Even Speaker Kavinder Gupta, a member of Right wing Bhartia Janta Party, expunged the words and expressed apologies.

However, Sajad Lone, an independent MLA and minister defended Ansari’s remarks saying lynching has a different connotation in assembly and Ansari did not mean to lynch Rana physically.

Ansari joined active politics after the demise of his father Moulana Ifikhar Hussain Ansari in 2014. He contested elections from Pattan assembly segment on PDP ticket. Right now he serves the cabinet as sports minister.  He also heads a faction of Jammu And Kashmir Cricket Association where presidency of the association is a matter of dispute. At the time of last cabinet reshuffle Ansari was at logger heads with his boss as he was unhappy for getting an undesirable ministry. However, his issues were resolved quickly after intraparty negotiations.

The use of the word lynching raised many eyebrows in the assembly for lynchings and debate surrounding it has engulfed length and breadth of India right now. It is widely debated in mainstream, alternative and social media in India. Hundreds protested in the streets of different cities condemning rising violence against Indian Muslims.

Reacting to lynching remarks National Conference working President Omar Abdullah said it was influenced by recent events in various parts of the India. Ansari is the chief patron of a religious body of Shias. He dons the cap of his father, literally, who had earned a respect in some sections of Shia community and had a huge say in their religious matters. With the baggage of lynching row whether he will be able to fulfill his father’s role and command the same authority, only time will tell as being a pro-India politician and earning respect from the society is an uphill task for anyone in Kashmir.