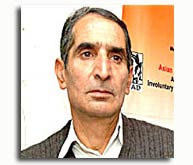 The diktat he issued, and was adhered to by a certain section, has to be defended now in the real court of law. The ‘Grand Mufti’, Bashir-ud-Din, and his authority in Jammu and Kashmir would be challenged by the human rights activist and convenor of J&K Coalition of Civil Society (JKCCS) Parvez Imroz.

His decree against the all-girls music band, asking them to stop playing music, as it was forbidden in Islam will undergo legal scrutiny in J&K High Court. Imroz has decided to move the court to challenge the constitutional and religious validity of Mufti Bashir-ud-Din.

Mufti Bashir-ud-Din is the “official Grand Mufti” of Kashmir heading the “Supreme Court of Islamic Shariah”. However, no one has confirmed his legal standing so far.

“I want to know which constitutional act gives Mufti Bashir-ud-Din powers to hold a personal court and issue fatwas,” Parvez said adding, “he is protected by the state government and has been trying to establish his own legal system. We have decided to move the court against his right to issue intimidating fatwas,” said Imroz.

“Who has appointed him as Kashmir’s Grand Mufti in Jammu and Kashmir constitution? There is no space for the post of Grand Mufti,” Parvez claimed.

The move comes after Mufti Bashir-ud-Din issued a fatwa against Valley’s all girls rock band, ‘Pragaash’ which spiraled into a major controversy recently. “The suit will not be just against him but also against the government, which has not taken any action against him during last three years,” Parvez said.

Nobody confirms Mufti Bashir’s “official” status or whether he receives any government help of any sort. “I was recognised by Sheikh sahib and all the governments,” Mufti said.

In his “court”, the Mufti’s decrees are read out by his “deputy”, Mufti Nasir-ul-Islam. Nasir is Mufti’s son and his post equally self-styled — Nasir was appointed by Bashir soon after his return from Abu Dhabi last year, where he was working.

Mufti Bashir is the state head of the Muslim Personal Law Board and remains most closely identified with the ruling NC. In fact, when Chief Minister Omar Abdullah tweeted about the Mufti’s decree on the girls’ band, he had to delete the tweet within half an hour.

He said Mufti Bashir has been issuing fatwas as Grand Mufti of Kashmir and it projects Kashmir and Kashmiris in bad light internationally.

Parvez would be challenging the authority of the Mufti in coming days in the court, a famous rights lawyer; he is noted for his work on the mass graves in Kashmir and building alliances between Kashmiri civil society groups. He was awarded the eleventh Ludovic-Trarieux International Human Rights Prize by Human Rights Institute of The Bar of Bordeaux, Bordeaux, France and the European Bar Human Rights Institute (IDHAE). Shah Abbas