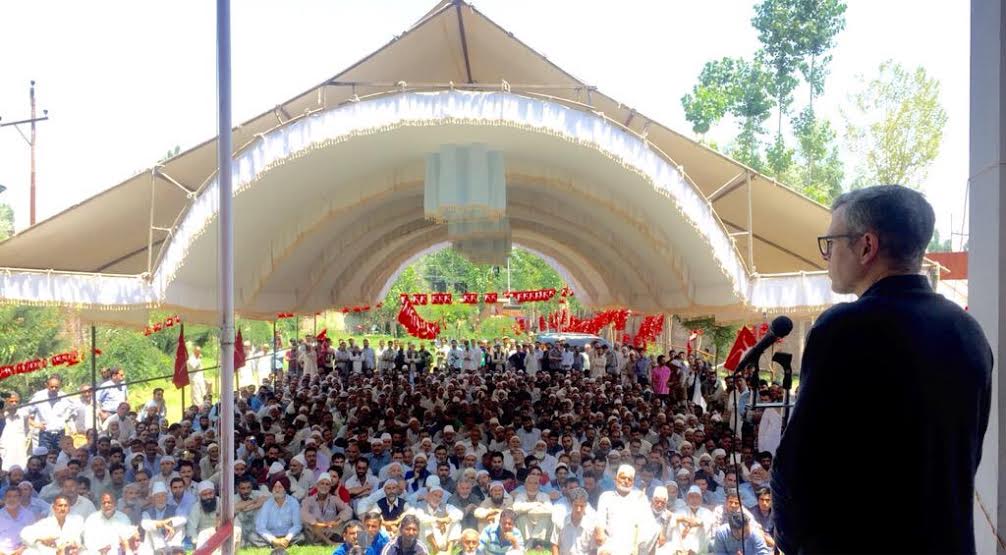 National Conference Working President and former CM Omar Abdullah on Thursday said PDP stood formally and publicly exposed as an opportunistic subsidiary of the BJP in J&K and it was now impossible for the party to cover its tracks.

The NC Working President, while addressing party workers at the launch of NC Membership Drive 2015 in Pulwama and Budgam today, said those in the Valley who had never participated in the electoral process came out to vote in 2014 to keep BJP out of power in the State. “Sadly they were betrayed by PDP’s singular obsession with power at any cost. How ironic is it that Mehbooba Mufti went around asking people to vote for PDP in order to keep BJP out of power in the State and then the same Mehbooba Mufti went on to visit Amit Shah’s Darbar to seek his blessings for the PDP-BJP alliance,” Omar Abdullah said according to a party statement.

“Despite all our ideological and political differences with PDP, we had offered them our unconditional support with the intention of keeping RSS out of J&K. Tragically however, PDP preferred to embrace RSS and BJP instead. And despite his effortless, complete sell-out for becoming the Chief Minister, Mufti Sahab has been pushed into a humiliating corner where he has been stripped of all the powers and authority of the Chief Minister’s chair. Decisions taken by the Chief Minister are publically overturned by Cabinet Ministers. While Mufti Sahab might prefer personal humiliation and denigration for the sake of power, the sanctity of the Chief Minister’s Office has been trivialized by PDP – and that is extremely unfortunate and humiliating for all of us,” Omar said.

Condemning the ruthless, merciless assault on protesting Rehbar-e-Taleem Teachers, Omar Abdullah said the State Government cannot go after teachers with sticks and batons after a brazen attempt to humiliate them. “My question to Mufti Sahab is simple. Did you check the qualifications of your leaders before sending them to Rajya Sabha – the Upper House of the Indian Parliament? Where was this concern for scrutinizing educational qualifications among PDP leaders at that point of time? When you can be completely unconcerned about the qualifications, rather complete lack of qualifications for members of Parliament, your brutal assault on 65,000 qualified teachers seems ironic. So before PDP questions the hard-work, competence and dedication of 65,000 qualified RET teachers, it should do some serious introspection in the same context,” he said.

“If the Government thinks the ReT Teachers aren’t adequately trained, they should be trained by the Government per the standards that are expected from them. You cannot treat the teachers of our society so ruthlessly by beating them and chasing them like criminals. I express my solidarity with the injured ReT Teachers. The ReT Scheme was started by National Conference around 15 years ago and has been a phenomenal success in not only improving the literacy ratio in the State but also ensuring that students in far-flung areas have easy access to education and opportunities. The scheme, which now employs close to 65,000 teachers, has also been a big source of productive employment generation. It seems PDP wants to play politics over this scheme – and that’s extremely petty and unfortunate,” he added.

Lashing out at the PDP-BJP Alliance, the former CM said the State was reeling under an atmosphere of political uncertainty and chaos as there was no sign of basic governance and stability. “Local youth are yet again choosing the path of militancy thanks to PDP’s brazen sell-out to the BJP. The same young men who were promised that PDP would keep BJP and RSS out of J&K have been betrayed and stunned into a psychological trauma post PDP’s alliance with BJP. And the Chief Minister is completely clueless. He has maintained a conspicuous silence on all crucial issues and developments. At this pace we will soon be apprehensive about the situation returning to what it was in the early nineties. The hard earn peace and stability in the State has now been wasted by a Government that is clearly invested in dividing the people of J&K on the basis of region and religion.”

“Is PDP the same party that swore by the Self-Rule document? The same party that promised people dual-currency, open borders and dignity? What happened to the slogan of ‘Healing Touch’? Why isn’t Mehbooba Mufti asking for the opening up of additional LoC crossings today? Were these slogans limited to electioneering and were they coined only to fool the people of Kashmir? Now the tragic reality is that PDP has fallen from the moral high of ‘Self Rule’ to a humiliating state of submission where PDP is now instead asking for the Naga Peace Process to be emulated in J&K.  Is the Kashmir Issue similar to the Nagaland problem? National Conference has not changed its political stand on a single issue till now. We stand for the resolution of the Kashmir Issue in accordance with the wishes of the people and continue to demand the restoration of Internal Autonomy in the State. What’s PDP’s stand about its Self-Rule document now? Does it even exist? Sadly Mufti Sahab and Mehbooba Mufti have sold their voice for the trappings of power – so they won’t be allowed to answer these questions by the BJP,” Omar said.