Without tourists since August 5, 2019, Kashmir hoteliers opened doors to shelter the Covid-19 suspects for mandatory quarantine. Initially, most of them were unhappy and reluctant but now a section is cooperating with the officials, reports Syed Samreen 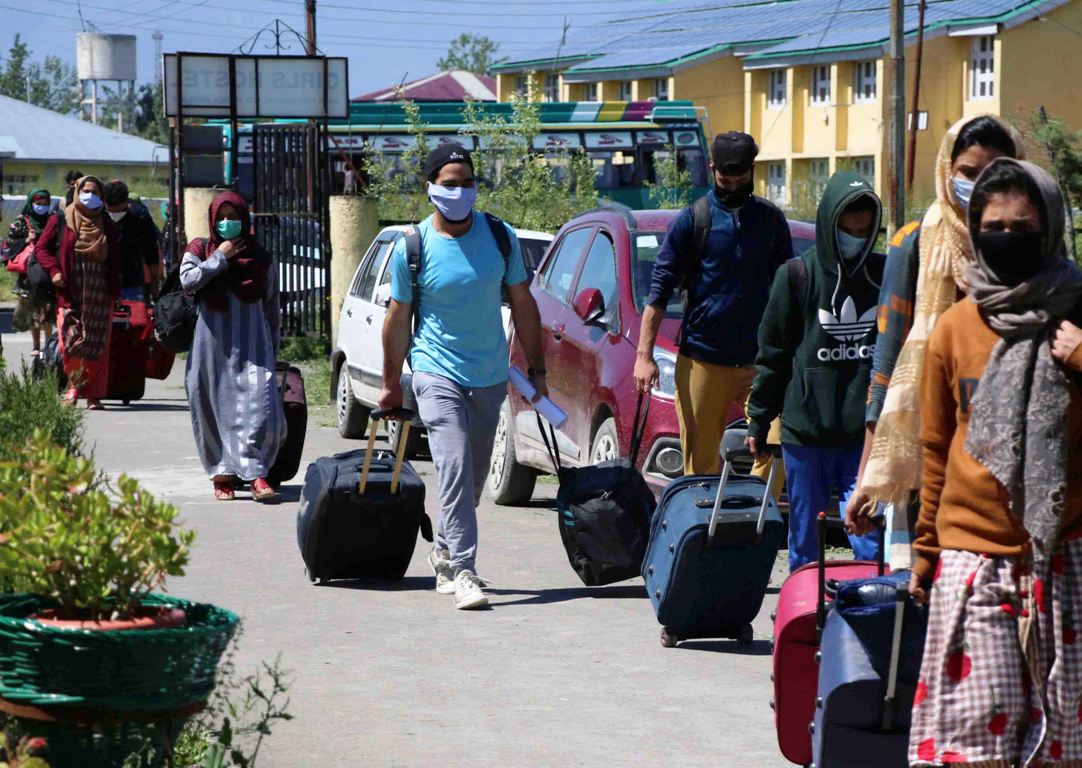 Kashmiri students and businessmen Who arrival Kashmir from Haryana, Punjab on Private Buses arrive at Industrial Training Institute (ITI) Bemina Srinagar used temporarily as a quarantine facility, who were stranded in different parts of India and return to Kashmir, will be tested for coronavirus before getting sent to their native places in different parts of Kashmir. on Friday, May 15, 2020. KL Image by Bilal Bahadur

Once bustling with tourists, the hotels in Kashmir are lying vacant since the revocation of Article 370 on August 5, last year. Now many of them have been turned into quarantine Centres. Almost, 144 hotels stand declared as quarantine centres to house the Covid-19 suspects under the Disaster Management Act.

The first hotelier to open doors to the first flight of Kashmiri students flying home from Bangladesh was Sheikh Mohammad Iqbal, the promoter of the Pine Spring chain. Ironically, Iqbal says that he might be the first one to shut his hotel as a quarantine facility. “I can’t take it anymore,” said Iqbal. 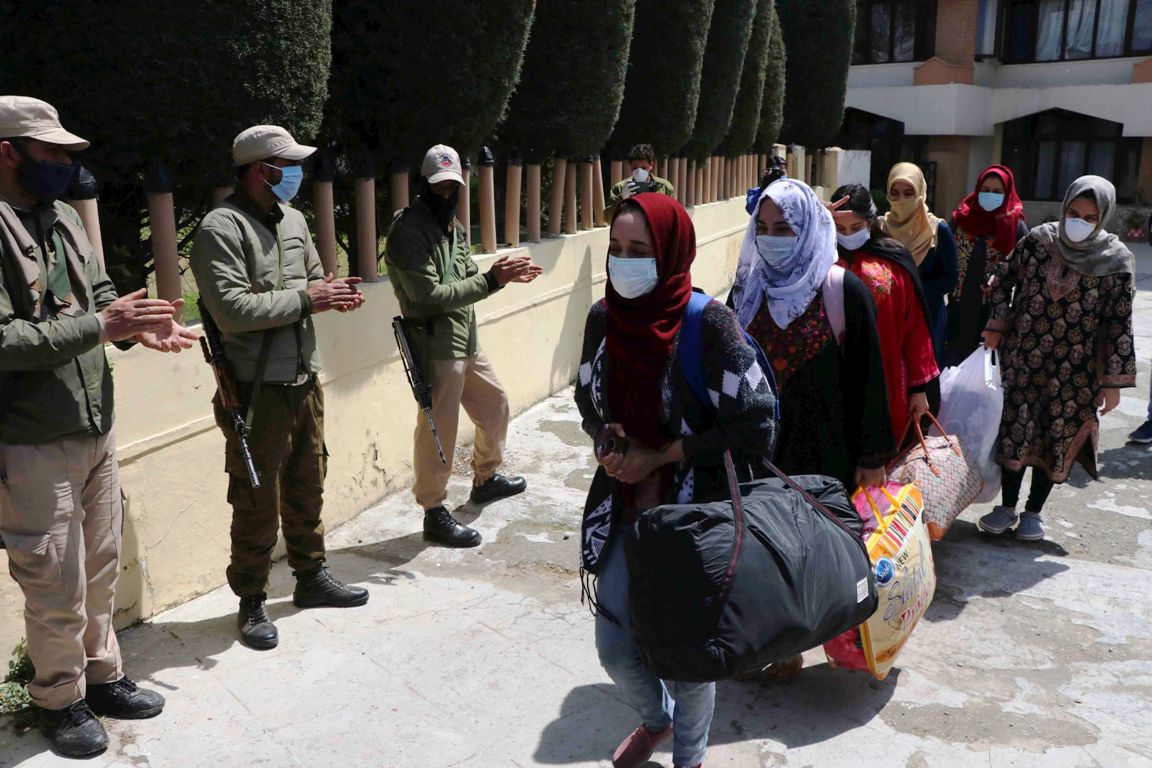 Officials bidding adieu to the fourth batch of people who left for their homes after a fortnight-long stay in a quarantine facility in Srinagar on April 3, 2020. KL Image by Bilal Bahadur

Located a Wazir Bagh locality, his Hotel Pine Spring was subjected to stone-pelting by the residents after it was declared a quarantine centre. Residents feared it might spread the disease in the locality. This wave of attacks was reported from almost all the localities in Srinagar including Dalgate, the main hub of the tourist activity in the city.

Despite the backlash, Iqbal made it a point to provide shelter to the girls who had returned from Bangladesh.

Financially broke, the hotel owners even had to pay from their own pockets to provide the virus suspects with basic facilities. “For the last few years, we have already been devastated financially but had to provide for the people completing their quarantine in our hotels,” Iqbal said. “My conscience didn’t allow me to abandon the people and stop providing them food, despite the fact that we were paid peanuts by the government for the facility.” 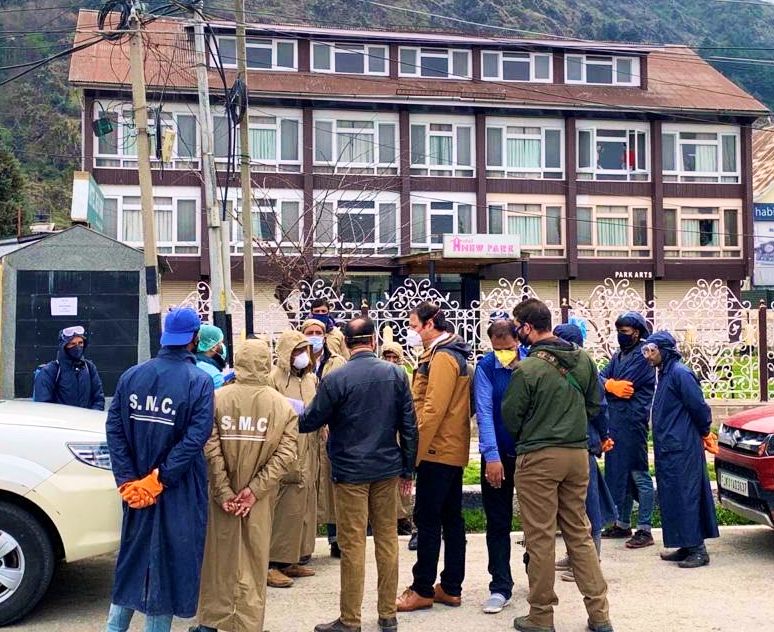 Authorities and Municipal officials outside a Srinagar Hotel that was being converted into a quarantine centre for travelers who flew home during pandemic. KL Image: Syed Samreen

The hotel staff was not paid anything for a long time owing to the curfew restrictions that followed the August 5 move. They were looking forward to the revival of tourism this spring but the pandemic dashed their hopes.

“I am providing my staff with uniforms, gloves and sanitizers from my own pocket keeping in view that they have to deal with international returnees,” Asserted Iqbal. “I should not end up pushing them to harm instead of helping them in the crisis.”

Iqbal is concerned over the cost-benefit ratio. He alleged they are being exploited. “We were told that we will be given Rs 230 for four meals a day but believe me, the total disposal per day is around Rs 8000”.

Asif Iqbal Burza, the top executive of Kashmir’s second major hotel chain, the Ahad Group of Hotels and Resorts, said the sector has been suffering due to the ongoing turmoil and lockdowns.

“Our fraternity is devastated as we are in shambles,” Burza said. “Even if some of the hotels are converted into quarantine centres, for the time being, it won’t be able to help the already debilitated industry.”

Burza believes that the majority of the hotels might shut down if the uncertainties prolong. Though none of his hotels’ figures in the list of the Quarantine Facilities, he said he sympathises with his colleagues because he knows it is not easy running a hotel on the minimal amount granted by the government.

“We have to take care of the needs of our workers,” Burza said. “They look up to us, we can’t disappoint them.”

The hospitality sector has been in a crisis since the devastating September 2014 floods. While it made efforts to bounce back, there were other tensions to undo the attempts. The last major blow came in anticipation of August 2019, when the government ordered that all non-locals must avail the free transportation and leave Kashmir. Some of the hotels within and outside Srinagar, then, were quite busy. The reason, as was dished out by the top army officers and the politicians in Delhi was the recovery of a landmine!

“Our earnings have always come in bits and pieces,” Burza said. “We were hopeful that we may get back to business in 2020 but the pandemic overtook us. I wonder if we will ever be able to come out of this”.

Staff of a hotel that was converted into a quarantine centre for the travelers flying home to Srinagar. KL Image: Syed Samreen

Burnt quilts, smashed windowpanes, broken plumbing and a whopping electricity bill of Rs 88,000 was exactly how Abdul Wahid Malik alleges his gracious hospitality was responded with the people returning from Goa. President of Kashmir Hotel and Restaurant Owners Federation (KHAROF), Malik New Park Hotel on Dal banks was one of the hotels taken over by the district administration for use as quarantine centres.

Of around 80 staffers, 20 were asked to serve the returnees. The day they got to know that they had to serve the potential carriers of the contagion, thirteen deserted the hotel during the very first night.

“There were just eight people who served the first batch of students,” Malik said. “Given the acute shortage of workers, sometimes, even I used to knock at their doors and serve them food.”

Malik said they shared their problems with those housed in the hotel. The student behaved extremely well as they understood the tensions.

“It is our duty to provide excellent services to the people who stay at our hotels, but we aren’t even paid the basic room rent by the government,” Malik alleged. “Let alone the rent, the administration should first provide us with basic protective gear because you never know who carries the virus. This dread led to the staff desertion.”

At Tourist Reception Centre (TRC) in Srinagar, there is a routine rush on a daily basis where the stranded people are being driven from the airport and those coming by road. They are being sent to quarantine. It has led to the impression that the pandemic has given a new lease of life to the hospitality sector.

Malik, however, asserts it is a misconception. “I have been observing social media for a while and can confirm that people are spreading lies about us,” Malik said. “We have never been at peace and then came this tribulation. We are just helping people and the government. This is no earning at all.”

Sheikh Aashiq, the president of the Kashmir Chamber of Commerce and Industry, emphasized that the ongoing lockdown and the consequent loss wasn’t new to them. “We are different from the rest of the world. It has been over a couple of months for them, but for us it already has been more than ten months, so far,” Ashiq said. “There will hardly be any leisure tourism for the next two years, which will add to the miseries of the already crippled industry.”

Ashiq asserted that unless there is a Kashmir specific revival package for industry, it will be difficult to restart all over again. “Providing lodging to the people who ought to complete their quarantine can never be an alternative to earning,” Ashiq said. It’s a matter of survival for the hoteliers and it’s the duty of the Government to come to their rescue.”

Understanding the crisis that the hoteliers are facing, the government initially agreed to pay a basic minimum per head to the hoteliers whose properties were declared as quarantine centres under the relevant law and taken over. “We had quite a small budget for them,” one middle rung official said. “We paid Rs 250 per head only if they provided food. We lacked any provision for rentals. Those who did not feed the people were not paid anything.”

After confronting the issues, the systems were amended. “Now people keen to stay in the hotel quarantine have to pay the costs and they have to directly negotiate with the host hotelier,” one senior officer in the Srinagar administration said. “They have kept the rates low and some people are availing the facility.”

The government has already decoded the tariff: Rs 400 for food every 24 hours and double bed Rs 1800 in A-Class Hotels and Rs 800 for B-Class hotels.

Those who cannot afford the quarantine in paid premises are being sent to various administrative centres including hostels of the academic institutions and other infrastructures like Indoor Stadium and the Haj House. In Srinagar, there is more than 2000 bed capacity set up within the infrastructure that the government owns. These facilities are being managed by the local tehsildar’s. 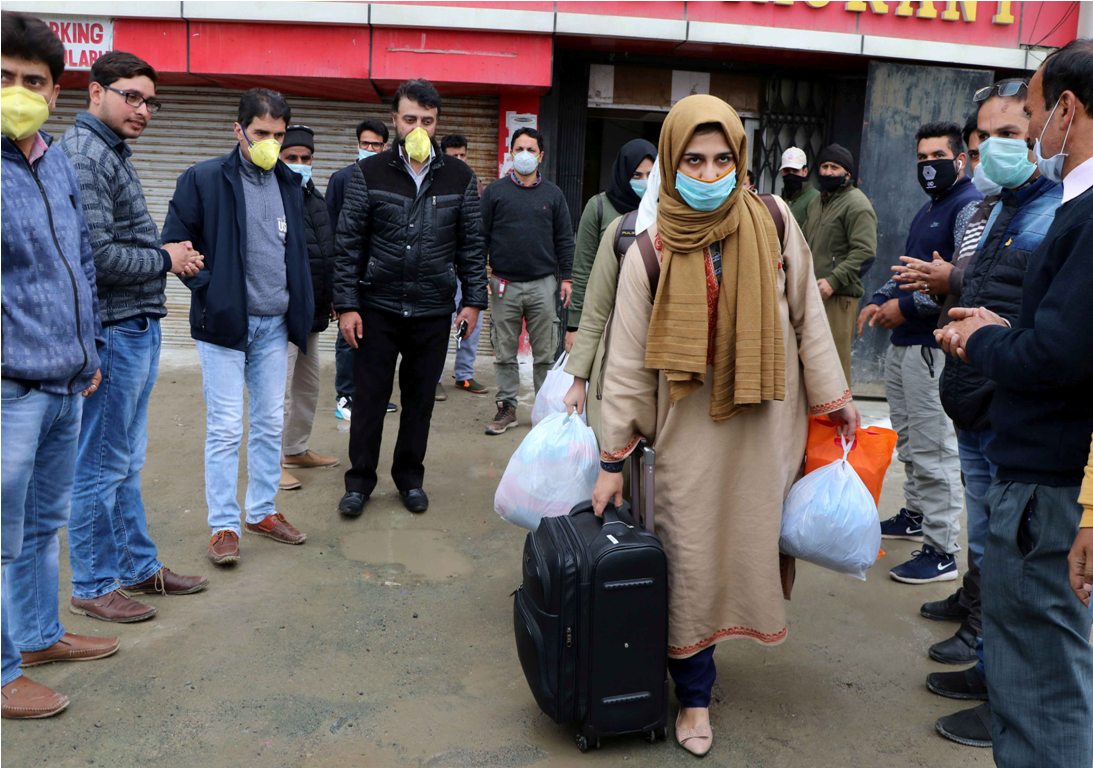 Officials bidding adieu to the second batch of people who left for their homes after a fortnight-long stay in a quarantine facility in Srinagar on April 1, 2020. KL Image by Bilal Bahadur

Besides, there have been other relaxations as well. Earlier, the people sent to the quarantine facilities had to remain there till the completion of mandatory 14 days. Now, the health workers are collecting swabs of individuals at their arrival at the airport or the TRC and sending them for testing. If the test results come negative, they are being permitted to go home and stay in home quarantine till they complete the mandatory fortnight of precautionary isolation.

“People are availing the facility,” one middle run official, who is directly involved with the quarantine management said. “Almost 95 per cent of the people who fly from abroad avail the paid quarantine facility perhaps because they are supposed to stay in week-long quarantine even if their test results come negative.”

Those flying from various domestic destinations within India avail the paid quarantine facility up to seventy per cent. They have the relaxation of going home within 24 hours if their swab samples test negative for Covid-19.

However, the people driving home by road are from a different class. “In more than 80 per cent of the cases, they opt for the administrative quarantine,” the official said. “We have enough space available though initially, it was problematic. We would keep space available for 300 people and then in the evening, we would get 3000 people. That has stopped now, especially by road. The air traffic is getting crowds but that all is manageable.”

So far more than 110,000 people from Jammu and Kashmir stranded within and outside India have returned home. Most of them were from the Kashmir region. There are still a few thousand people stranded and it will take some more time to return, especially from overseas destinations.