Shakeel Bakhshi is probably the only separatist leader, who became first in the separatist camp to be detained for his ‘pro-active’ usage of social networking sites, especially Facebook during 2010 summer unrest. 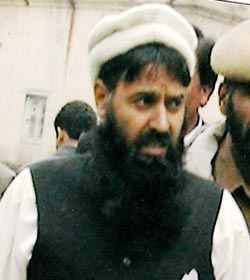 Founder member of Islamic Student League, Bakhshi was first arrested in 1975. He has spent 11 years in jails and when many of his associates died and some broke the vow of not marrying till achieving freedom, at 49, he is still unmarried, “Azaadi is my first love,” he says.

His Facebook page ‘Shakeel Bakhshi’ posts daily updates about Kashmir history ‘Today in History’. Besides, he runs a blog named ‘Kashmiri prisoners,’ which comprises stories of people in different jails.

Tech savvy Bakhshi who usually remains away from public gaze was seen on Nov 22 under a solitary chinar in Srinagar’s lone Christian cemetery at Sheikh Bagh, wiping off heaps of fallen leaves and dust over the grave of Robert Thorpe, a Briton who died in Kashmir on this day in 1868.

While observing his 144th death anniversary, Bakhshi claimed Robert to be ‘first guest martyr who laid down his life for the people of Kashmir’. Robert was half-Kashmiri. His father, Colonel E Thorp, who came to Kashmir in 1833, fell for beauty and lost his heart to Jana, a girl from Sugen Yarinar in district Budgam. He reverted to Islam, married Jana and flew back to England.

Decades later in 1965, Robert visited his mother’s land and, unlike his father, he was upset by the miseries of Kashmir. He travelled across the length and breadth of valley and opened the dark belly of the then Dogra Raj before the world through his writings. The miserable conditions of Kashmir’s attracted attention of Europeans and others.

The Dogras were annoyed and asked him to leave. He resisted, but was deported. Love for Kashmir could not hold him back and he sneaked back into Srinagar. Next morning, he was found dead after his breakfast.

Engraved on his dark grey epitaph is Obit- Robert Thorp- Veritas- He gave his life for Kashmir. It is believed that Thorpe had to pay with his life for his outspoken criticism of the Dogra autocracy. Was it a murder? It remains a mystery.

Thorpe’s posthumously published book ‘Cashmere Misgovernment’ is perhaps the first book giving information on the taxation system, shawl industry, begaer (forced unpaid labour under the Dogras), the 1846 Amritsar treaty between Maharaja Gulab Singh and the British government and other aspects of life in Kashmir. Ignored for a long time, his grave now is being visited by many young boys.