Joining politics by retired bureaucrats is a trend emerging very fast in J&K and the politics eventually is getting increasingly bureaucratized. But Showkat Ahmad Mir, a KAS officer, who till January 31, 2013, was the deputy commissioner of Omar Abdullah’s Ganderbal constituency created a record of sorts by joining National Conference next morning at 9:30 am, making the entry in politics within less than 24 hours after superannuating. 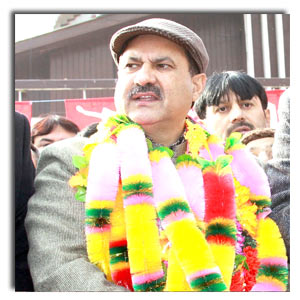 Showkat who hails from Tanmarg is a law graduate. He is not new to politics, but the lack of space in political arena led him to join administrative services in 1987. His first role was the private secretary of the then PWD minister and MLA Tangmarg, Dr Mustafa Kamal, whose position he may eventually take.

Mir says his association with NC dates back to 1973 and his active role continued till 1987. Interestingly, Mir will be fielded against his surname-sake, Ghulam Hassan Mir, who has won polls for the third consecutive term. Mir earlier worked for him as chief election agent in 1983 and in 1987 for Dr Mustafa Kamal. In between, Mir played pivotal role in success of Prof Saif ud Din Soz when he contested parliamentary elections on NC ticket.

Mir has held various positions in the state government administration and heading the district Ganderbal was the last assignment of his career. Though he had indicated earlier as well about his keenness to join politics, but message was sent loud and clear by none other than Omar.

Abdullah himself when, while inaugurating NRLM in Ganderbal, he said, “DC did a commendable job. After three days I am giving him new role to be nearer to people.”

So much was the urgency that ‘at one point of time, it was the issue of whether I should join in the forenoon or the afternoon’, he said. Mir was escorted to his home in Tangmarg on Friday morning by NC’s provincial president, Nasir Sogami, and other party leaders where the announcement was made publicly. “At a short notice, I could gather a few hundred people and that was it.”

Mir believes he is well aware of the problems faced by comman man and will try to bridge the gap. When asked what role he was expected to play, “I don’t know the plans of party. But I will try my level best to work as a political worker.” He was quick to add that in next few days, the high command is going to restructure the party at various levels.