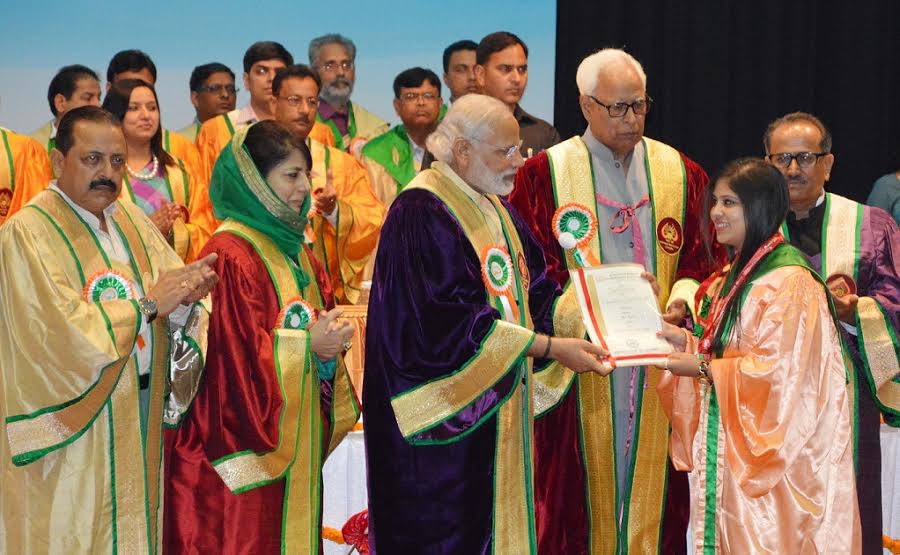 The 5th Convocation of the Shri Mata Vaishno Devi University (SMVDU) was held at its Auditorium in Katra on Tuesday.

Prime Minister of India, Narendra Modi, was the Chief Guest and delivered the Convocation Address, an official spokesperson said this evening.

Governor N N Vohra, who is Chancellor of the University, presided over the Convocation while Chief Ms Minister Mehbooba Mufti, Dr Jitendra Singh MoS (PMO) and Dr Nirmal Singh, Deputy Chief Minister were the Guests of Honour on the occasion.

The Governor awarded 837 degrees including PhD, Master’s and Bachelor’s degrees. The Prime Minister gave away 20 Medals and 36 Certificates of Excellence and Distinction to meritorious students.

The Governor congratulated all those who received degrees at the Convocation and wished them high success in their future careers. He also complimented all those who were presented medals, certificates and awards by the Prime Minister.

The Governor said that it was a proud moment for the University that Prime Minister Narendra Modi is among them and addressing the Convocation. He said that this important event had assumed added significance as a little while earlier the Prime Minister had inaugurated the Shri Mata Vaishno Devi Narayana Super Specialty Hospital, in the immediate neighborhood of the University, thus fulfilling another long awaited dream of the Shrine Board to contribute towards providing better healthcare for the people at large, at affordable prices.

Recalling the objectives of the establishment of the Shri Mata Vaishno Devi University, the Governor said that this institution aims at achieving excellence in teaching and research along with nurturing sound moral, ethical and spiritual values among the students, crucial for the holistic development of youth and making them valuable members of the society.

The Governor said that, by all account, the students graduating from this University are imbued with ethical values, besides being well trained in their chosen areas of specialization, which makes them distinct from their counterpart in other Universities. He mentioned that this University, in spite of being very young, finds the 80th place among the top 100 Universities in the country, based on a recent survey conducted by the Union Ministry of HRD.

The Governor observed that the conceptualization of this University as a fully residential, scientific and technological University was a first in the State of J&K and he is happy that the successful implementation of this model has paved the way for others to follow.

Referring to the over a decade long journey of the University the Governor observed that it has the distinction of attracting meritorious students from more than 20 states of the country, which is rather significant considering the location of the institution. These students are admitted to the various Undergraduate, Postgraduate and Doctoral programs of the University, offered under Faculties of Engineering, Management, Science & Humanities, through rigorous entrance process based on All India Competitive Exams.  Presently, 1529 students are pursuing various courses.  The University offers Scholarships & Assistantships to meritorious students besides helping those students who are from economically weaker sections of the society.

In just over a decade of its existence the University has produced over 2700 students who have become successful Engineers, Architects, Business Managers, Teachers and Researchers, and can be found in organizations, institutions, MNCs and universities of repute in India and abroad.

The Governor said that a decade back the University was not adequately connected to the rest of the country.  However, in a short span of time and thanks to the valuable interest of the Central government,  the University is now connected with the world class 4-lane Jammu-Udhampur National Highway and the Katra Railway Station which was inaugurated by the Prime Minister in 2014.

The Governor hoped that that the new Vice Chancellor, Dr Sanjeev Jain, will make all necessary efforts to attract more meritorious students and produce even better results.

Speaking on the occasion the Chief Minister recalled the happy memories of her own student years and exhorted upon the scholars to always respect the diversity and pluralistic ethos of the country. She said that it is our responsibility to lend every possible help to the non-local students who have come here for studies so that when they leave this State they would carry cherished memories of their stay here and be our goodwill ambassadors.

Earlier, Prof Sanjeev Jain, Vice Chancellor, SMVDU, presented the Vice Chancellor’s Report, highlighting the past achievements and future plans of action. He gave details of the campus placements, publications brought out by the University, research projects being undertaken and the various workshops and conferences organized by this institution. He said that various initiatives have been taken to build this institution as a centre of excellence.

State Government Ministers, Legislators, Vice Chancellors of various Universities, members of the Executive Council of the varsity, Chief Secretary, Members of the Shri Mata Vaishno Devi Shrine Board, senior civil and Police officers, Principal Secretary to the Governor, Chief Executive Officer of the Shrine Board, prominent personalities from various walks of life, Registrar, Deans, Directors, Heads of Departments, Faculty Members, students of the University and their parents were present on the occasion.