Kashmir was subcontinent’s second place after Mysore that had access to hydropower, albeit limited to the Palace at Zabarwan Hills and the M A Road, as early as 1905. After creating 19 projects in subsequent 100 years, Baglihar deserves a celebration because it indicates the light at the end of a long tunnel, believes Masood Hussain 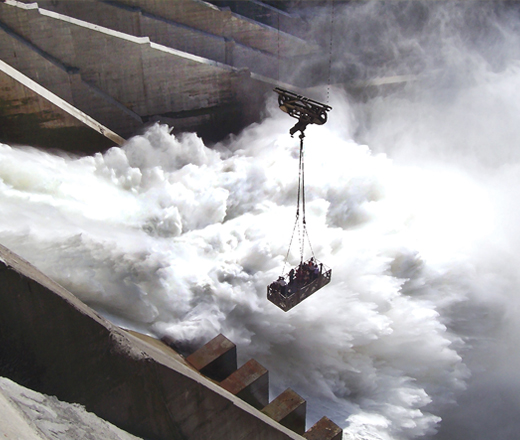 This terrifying photograph shows the daredevil actions of the constructions engineers at the Bagliahr power project who are being lowered to repair the exits when the water is flowing out of the dam. KL Image: Special arrangement.

After hundreds of labourers from Baltistan, Afghanistan and Punjab helped legendary European Engineer Major Dlain de Latbiniere to connect turbines from GE New York with water-wheels from San Francisco for Kashmir’s first power station at Mahore, near Uri, in 1905, the 3.5-MW generation lacked adequate load! Initially, it would power the elaborate dredging activity in Jhelum, later part of the surplus energy was transmitted to Srinagar and then to some of its peripheries. No surprise, this project was the sole source of energy to the Valley till 1955 and it still was enough.

In the last half-century, J&K set up 21 projects (excluding Raja of Poonch’s small powerhouse, already sold as scrap and Jammu’s Canal Power Station that Maharaja built-in 1910) with a cumulative installed capacity of 311.96 MWs (Baglihar excluded). But never ever did these installations help water-abundant J&K to come out of its historic energy misery. Had use of electricity been limited to lighting homes and hearths, it might have been manageable but energy is key to survival, change and growth. In energy-deficit, many people see the reason of backwardness of J&K.

The prevailing situation of energy offers a clear picture of the mess J&K lives in. State’s actual energy requirement in 2013-14 was 18022 million units (MU) that was reduced to a restricted demand of 12666 MUs. Of this, state’s own utilities generated slightly more than 2337 MUs, 1089 MUs came as free power (12% royalty from NHPC operating in J&K) and balance 10329 MUs were purchased from various central PSUs.

The real suffering comes from transmission and distribution losses. Of 12666 MUs available, 6912 MUs (54.57%) was lost to Transmission & Distribution (T&D) leaving barely 5754 MUs to be billed. Even though the power department recovered 94% of Rs 1667 crore of the billed amount, still the deficit was enormous. In 2013-14, the state’s total expenditure on purchase of energy was Rs 4471.96 crore of which Rs 3989.21 crore was on account of net purchase from CPSUs. This deficit between the costs of energy and the tariff realized was Rs 2205 crore in 2013-14 and is key to the imbalance in the state’s overall finances. Year after year, the gap between the net expenditure and the net realization of power tariff has been increasing, thus im-balancing the entire state kitty.

After Baglihar-I started generations; state’s power planners started ‘energy banking’. During summers, they would transmit surplus energy to any state in the plains, and get the same in return during winters when J&K undergoes load-shedding for want of adequate supplies. Insiders in the power sector say that there is not much being ‘banked’ during summers because the requirement back home is surging quite fast.

On the generation front, there is a clear imbalance between how NHPC and the state government managed tapping J&K’s water resources. NHPC in fact took off from J&K with Salal, many decades after J&K had made a modest start.

By the time J&K’s power sector implemented 21 projects (excluding Baglihar) totaling 311.96 MWs, NHPC had set up seven projects with an installed capacity of 2009 MWs. It still has three projects in hand in J&K of which 330-MW Kishanganga is expected to be in generation in 2017. Interestingly, most of the state owned small old projects are gradually emerging into liabilities as they require more funds than they earn. Almost 14 projects are exhibiting a low generation year-on-year basis suggesting the deterioration in their technical and economic viability. Some of them are under various stages of uprading and modernization but that will still require massive financing.

In such a condition, the only way-out was to invest in a major project that would offset the balance and help J&K emerge on the hydropower map. That is what Dr Farooq Abdullah did when he resumed power in 1996 after a prolonged spell of governor’s rule. It marked the beginning of Baglihar as a project and a change. Inauguration: Dr Farooq Abdullah with his team on the sight in September 1999.

It was in May and June of 1997, when the State Power Development Corporation (SPDC) approached a select number of energy project developers, under the limited bidding arrangement, for Baglihar implementation.  Those approached included Voith Hydro, Sanska International, Abdul Latief Ebrahim Galadari of Dubai, Korean Sung Kweon Kim, a Norwegian developer, the British Expand Corporation Ltd and SNC-Lavlin.

At one stage, the International Baglihar Corporation was looking a reality. With Italian Impregilo SPA as the leader of the consortium, it had members like Voith Hydro and EdZublin AG from Germany and  Electrowatt Engineer and ABB  from Switzerland. But there were lot of issues that prevented a take-off.

Eventually, only two firms responded: Jai Prakash Industries (later Jai Prakash Associates) and Canadian SNC-Lavlin. Finally, the SPDC Board of Directors approved an MoU with JPI-SNC Lavlin consortium on November 12, 1997. Two days later, the MoU was signed and it was a celebration. Union Power Minister Dr Y P Alagh flew from Delhi and so did the senior representatives of Swedish and Canadian embassies. MD SPDC Javed Shahmiri signed an agreement with Lennart Reuman and J P Gaur. Alagh termed it a historic day.

But the vital part of the agreement was that 85 percent of the project cost would be overseas loaning that foreign partner of the consortium SNC-Lavlin would manage. It required sovereign guarantees from Delhi.  The guarantees never came and the agreement did not take off. J&K Bank was around every time Baglihar needed funds.

By then, SPDC was hunting for a consultant for the project. It approached 20 consultancy firms including Arther Anderson, Deutsche Morgan, Tata Engineering & Research, IBC, ABB, German Siemens and French Alsthom. Finally, it got Lahmeyer International Gmbh.

The government felt frustrated over managing guarantees. Finally, it revised the draft contract agreement on April 7, 1999 and signed a fresh MoU with JP Industries for the project for Rs 3495 crore. JP took Voith Hydro Ltd (which has Siemens as a silent partner holding 23% shares) as an electro-mechanical partner. The work started on January 1, 2000.

The project defied everything; deadlines, costs, design and the processes. Both the stages were completed in 15 years during which J&K saw governments changing in 2002, 2008 and 2014. It required four extensions in its date of completion and its costs were revised four times. The Chief Engineers (civil) at Baglihar shifted nine times. The SPDC that owns the project had its Managing Director changing 15 times.

Veterans in the SPDC and the government believe that the real story in Baglihar implementation was the struggle, of which the project was just a byproduct. The lessons learnt in its execution are said to be the real successes that will help J&K now to manage any project of any capacity in future.

The challenges came on three fronts. Firstly, the diplomatic front when Pakistan invoked Indus Waters Treaty and challenged certain aspects of the design. This triggered World Bank mandated third party intervention and eventually the imbroglio ended with the project getting a final go-ahead. The issues cropped up when again the reservoir filling started.

Secondly, managing resources proved a literal crisis. The project implementation started without financial closure which made Baglihar very costly. Its financial closure was achieved when the project was almost half through. State government and the SPDC had to exhaust every option in keeping the show going on. It was at a later stage that central government was sympathetic towards the state and granted some subsidy and soft loans to help complete the massive exercise.

Thirdly, the project implementers confronted geological and ecological challenges which were never imagined. So much so that the project was literally decimated in 2005 summer. Its retrieval was at a huge cost.

On the basis of investment and the return on investment, J&K government does not own a project in any sector that is as huge as Baglihar. In major projects, there are always certain individuals and institutions that play key role. They exist in Baglihar, too. J&K Bank, for instance, was the lone institution that played an exceptional role. Initially, most of the bridge loans and petty over-drafts were sourced from J&K Bank and later it became part of the Power Finance Corporation (PFC) led consortium that funded the project. In Stage-II, J&K Bank is a major stakeholder. Dr Manmohan Singh, the then Prime Minister inaugurating the first stage of Baglihar.

Then there are three individuals whose contributions are enormous. Firstly, Dr Farooq Abdullah, the then Chief Minister, who worked tirelessly to manage resources and when he failed he initiated the project without financial closure. Secondly, Dr Haseeb A Drabu, the then Economic Adviser, who appeared on the scene at a time when the project lacked funds and managed its financial closure. Later, in 2005, when the project faced a crisis and required more money, he played a key role in getting part of it from Prime Minister and part as a loan from the centre. Thirdly, Basharat A Dhar, a capable bureaucrat who oversaw the implementation of the project effectively across regime changes between 2004 and 2011, initially as Secretary Power in three tenures and subsequently as MD SPDC for nearly two years. The project is SPDC’s new identity. Apart from an estimated Rs 1500 crore energy that the project would be generating (stage-I with 450 MWs is running and stage-II will operate from the 2016 summer to its full capacity), the most precious gain for the state and the SPDC is the credibility that it earned in the market. Politics apart, the lenders were unwilling to commit funds because J&K had historically never attempted such a huge project. They had apprehensions that the funds might be lost given the lack of any track record. But once the project started generating and the state government-SPDC skipped faulting on its repayments, the credibility was gained. This credibility helped the SPDC manage the financial closure of the Stage-II literally in a jiffy and right now the lenders are so confident that the offers with SPDC are to the tune of Rs 60,000 crore for the upcoming projects.

This is a fact that Baglihar alone lacks the capacity of ending the long dark tunnel for J&K’s energy deficit. Right now half of the generation from 450-MW Stage-I is sold for repayments and the process will continue till the last penny is repaid. Even in Stage-II, more than half of the energy will go for debt servicing. But the successful project completion marks the beginning of the end of the tunnel, not the end per se. For J&K, implementing projects is now easier and possible. J&K now knows the track for building a project, owns the first-hand experience, has lender-friends and, most importantly, understands how the machines run once they are owned. That is the net change Baglihar affected.