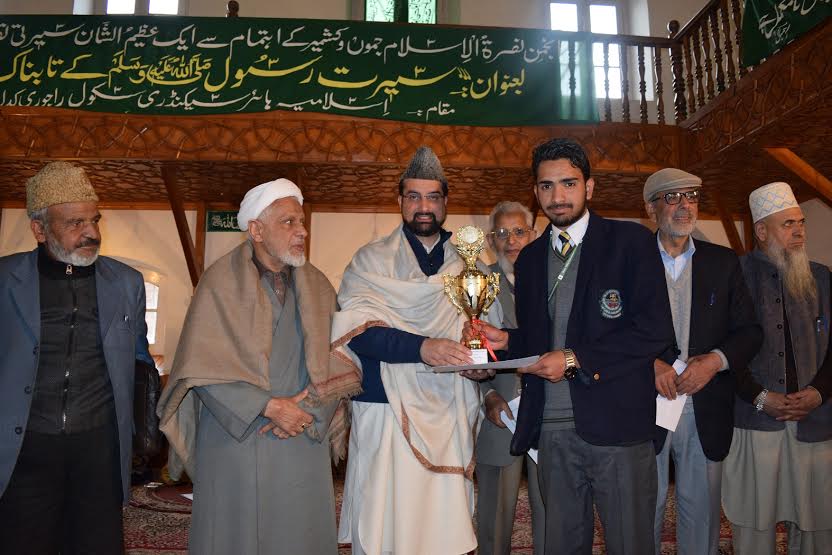 Anjuman-e-Nusrat-ul-Islam President and Jammu Kashmir Mutthida Majlis-e-Ulema Ameer, Mirwaiz Umar Farooq Saturday said that following the teachings of Prophet Muhammad (SAW) in letter and spirit and showing involvement in adopting the principles of Islam in everyday life alone could help resolve the problems of the Muslims.

Delivering his keynote address at a Seerat Conference: Seerat Rasoolullah (SAW) Key Hayaat Afreen Pahlun, organized by Anjuman-e-Nusrat-ul-Islam in the central auditorium of Islamia Higher Secondary School, Rajouri Kadal, Srinagar, one of the oldest schools of Kashmir, Mirwaiz shed light on the personality of Prophet Muhammad (SAW) and his teachings and different facets of his life and times.

Mirwaiz said, the basic teachings of Islam and Prophet Muhammad (SAW) are relevant in every sphere of one’s life as they lay stress on a moral and just society and without following these teachings in the real sense; it would be difficult and impossible to eradicate political, social, moral and religious conflicts from the society.

Stressing, the need for the Muslims was to strengthen their bond with Islam and Prophet Muhammad (SAW) to meet the challenges facing them.

Expressing his concern over the pitiable condition of traditional professions and crafts of Kashmir, he said there were times when Kashmir was economically stable and Kashmiries had preserved their art and crafts like carpet weaving, shawls, papier-mâché, walnut carving, copper and silver engraving etc. and used to export the goods but now people were looking down upon such professions and giving them up, which had made people dependent on others.

Making it clear that all prophets of their times adopted different professions for their livelihood and even Prophet Muhammad (SAW) continued his business and emphasized on giving importance to indigenous forms of livelihood and skilled labour, the Mirwaiz said it was unfortunate that today Kashmiris were giving up traditional skills and artisanship.

Stressing that for the unemployed youth, particularly the educated it would be extremely difficult to get rid of their unemployment till they do not value the dignity of labour and engage themselves with the art and crafts of Kashmir.

Mirwaiz further suggested the youth to brighten their talent and come forward to promote the traditional professions of earning as no profession was prohibited in Islam which ensures Halal earning.

He said the need of the hour was that youth instead of craving for government jobs should opt and promote the traditional artisanship which had for long been an important component of a stable economy in Kashmir.

Meanwhile, dozens of students from various renowned private schools participated in the Seerat Conference and expressed their viewpoint. Besides, students, religious scholars, Ulema, senior citizens, intellectuals and members of Anjuman were also present on the occasion.