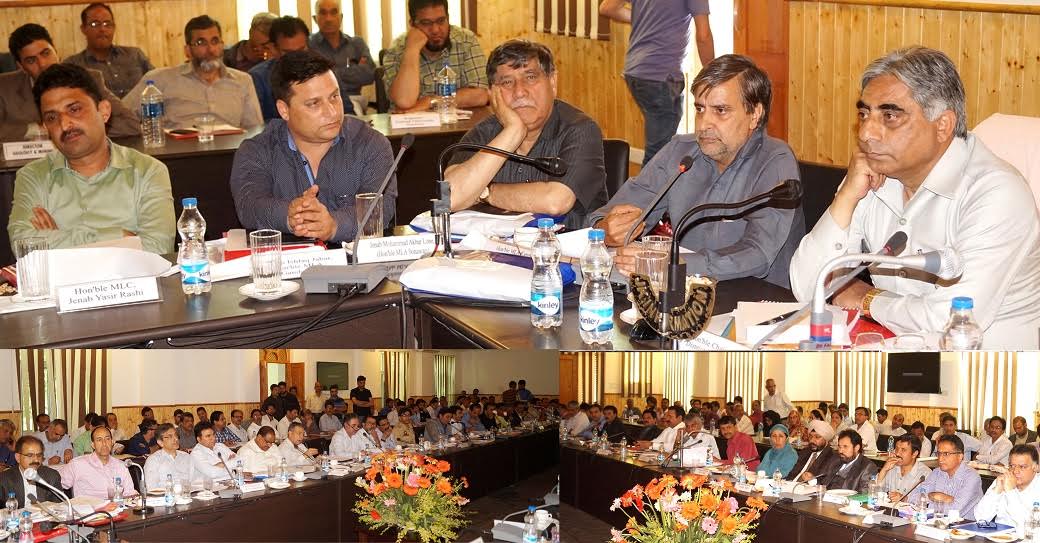 The District Development Board (DDB) Ganderbal which met on Thursday under the chairmanship of Minister for Agriculture Ghulam Nabi Lone Hanjura approved plan annual outlay of Rs 93.12 crore for the year 2016-17 for the district.

Taking stock of the pace of work on District Hospital Ganderbal, it was informed that out of estimated cost of Rs 52 crore, an amount of Rs 24 crore has been released so far under National Health Mission (NHM) and construction work on the project is going on and one block of the hospital will be completed by September this year.

The Minister directed the executing agencies to speed up the pace of work on the hospital and complete it in a time bound manner. He also asked them to ensure functioning of the Maternity hospital. Hanjura said that all existing health institutions would be provided with medicines and latest diagnostic machines adding that adequate medical and para-medical staff will also be provided to ensure best medicare facilities to the patients of the district.

During the meeting, shortage of teaching staff in education sector especially in Ganiwan area was discussed. The Chairman directed the concerned to look into it and ensure rationalization as already instructed by the Government. It was informed in the meeting that the gap will be filled on contractual basis as per the norms.

During the meeting, detailed discussions were also held on release of honorarium among the beneficiaries under National Family Benefit Scheme (NFBS). It was informed that digitization of the beneficiaries is under process and will be completed by May 2016.

On the occasion, the Minister directed the DDC to sanction compensation in favour of landslide victims of Kangan constituency immediately. Tourism related issues were also discussed in detail in the DDB meet.

While reviewing the progress of ongoing Water Supply Schemes, up gradation and improvement of roads, school & hospital buildings, the Minister directed the concerned executing agencies to gear up its men and machinery for completing all ongoing schemes and projects within stipulated time frame so as to ensure that the benefits of these programmes percolate to the people.

While taking stock of sports facilities available in the district, the Minister directed the DDC Ganderbal to identify the land at tehsil levels for development of playing fields. He also asked them to convene a meeting with the legislators of the district in this regard.

The DDB meet also discussed shifting of Madri Meharban Stadium from Sport Council to Department of Youth Services and Sports, the Minister said that decision was already taken in 2011- 2012 and 2012-2013 in this regard but was not implemented. The Board strongly recommended for the same.

Hanjura also directed the concerned for identifying land for construction of a Marriage Hall at Ganderbal Town.

To address parking and bus stand issue in the district, Hanjura asked the concerned to remove all bottle necks, if any, and prioritize the construction of Bus Stand.

The Minister asked the officials of horticulture department to conduct a survey of the district and identify the land for establishment of hi-density units. He also directed them to prepare DPRs in this regard and submit the same to the concerned for accord of sanction.

The Chairman directed the PDD and PHE authorities to take immediate measures for dewatering especially of Burzuhama and Gadoora areas. He also asked them to ensure all existing Pump Stations are functional.

Discussing the issue of construction of Central University and Engineering College, MLA Sonawari suggested Chairman to look into the feasibility of starting educational work in these institutions at an earliest.

While discussing the Rural Developmental works in the district, the Chairman directed the RDD authorities to ensure works are implemented on ground.

Addressing the meeting, the Minister impressed upon all the Head of the departments and sectoral officers to ensure implementation of all the DDB decisions in letter and spirit. He also asked them to consult concerned legislators before formulating any project or schemes and to incorporate their suggestions as well.

The Minister stressed for proper monitoring mechanism of works so that desired results are achieved on ground.

Reiterating the commitment of the Government led by the Chief Minister Mehbooba Mufti to provide basic amenities to the people of the State, the Minister said that liberal funding will be provided under various sectors and focused attention is being given to improve the socio-economic conditions of the people.

He also said that Agriculture and its allied sectors are vital for growth of rural economy which shall get special attention.

Earlier, the DDC Ganderbal briefed the meeting about the physical and financial achievements made by different departments during the previous financial year.